A day after a new government was approved after months of wrangling, the country's new acting president has called a fresh vote in September. The move prompted tens of thousands of people onto the streets. 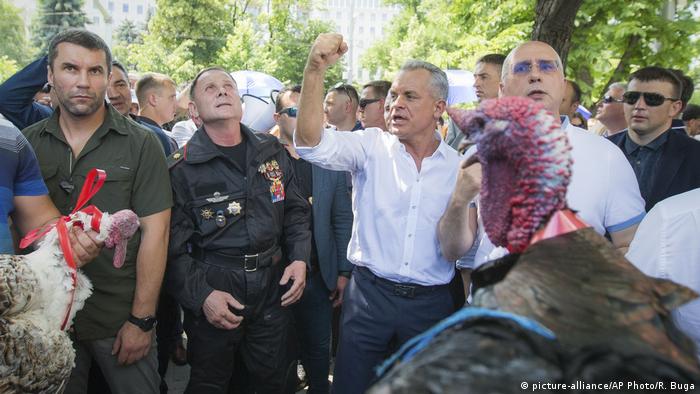 Moldova plunged deeper into crisis on Sunday after a court temporarily relieved President Igor Dodon of his duties to allow a stand-in to call a snap election.

The first election in February produced a hung parliament,  prompting months of negotiations between the main parties.

On Saturday, Dodon's Russian-backed Socialist party had announced it was forming a coalition with the pro-European Union ACUM bloc.

The unlikely alliance was designed to keep the Democratic Party of Moldova, run by tycoon Vladimir Plahotniuc, out of power.

The coalition was finalized only after the Constitutional Court ruled Friday that new elections should be held. The court's latest ruling allowed Filip — who backs closer integration with the European Union — to dissolve parliament and call a snap vote for September 6.

After being forced aside, Dodon called on Russia or the European Union to intervene in the country's political crisis, saying that Moldova's top court was not politically independent.

"We have no choice but to appeal to the international community ... for it to act as a moderator in the process of peaceful handover of power," he said.

However, the Constitutional Court has already suspended Dodon several times in the last two years when he refused to back laws or appoint ministers.

Denis Cenusa, a Moldovan political researcher at Germany's Justus-Liebig-University Giessen, told DW that the Socialist-ACUM coalition, led by Dodon, would now struggle to proceed without "external legitimacy and the loyalty of the state institutions."

Meanwhile, more than 10,000 supporters of the Democratic Party held a rally in the center of the capital Chisinau on Sunday, attended by Filip. The party bussed in large numbers of people amid a heavy police presence.

Amid signs of trouble brewing on Saturday, the EU's spokeswoman called for "calm and restraint," and for Moldova to respect the rule of law and democracy. Russia urged parties to avoid destabilization.

A prolonged crisis threatens more instability in one of Europe's smallest and poorest nations of 3.5 million people, where entrenched corruption and low living standards have pushed many citizens to emigrate to Russia or wealthier European countries.

Moldova has been dogged by political instability ever since a scandal known as the "theft of the century" emerged in 2014-2015 in which $1 billion, around an eighth of its economic output, was stolen from three banks.

The tiny ex-Soviet republic is squeezed between Ukraine and EU member Romania. Politically divided, some of its voters favor closer ties with the EU, while others prefer closer ties to Russia.

How do you grab an audience's attention with your own ideas? Five young media makers tried it out at the first international Media Slam – part of DW Akademie's Youth Meets Media networking conference in Moldova. (11.04.2019)