In near-final results, a pro-Russian party was several points ahead of pro-EU parties after Sunday's election. The country on the EU's eastern border is facing an uncertain future balancing between Brussels and Moscow. 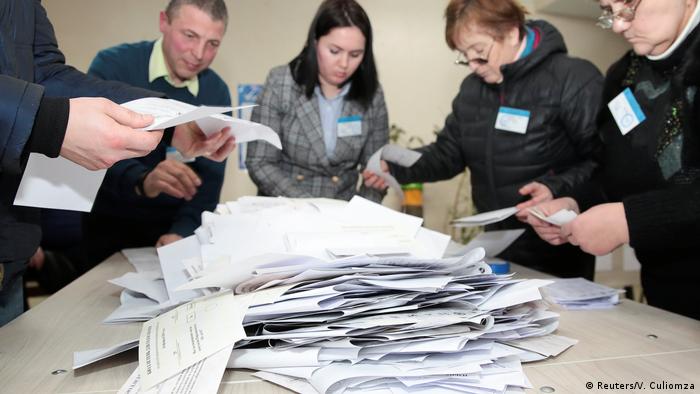 Moldova's pro-Russian opposition Socialist party claimed a narrow lead, but no majority, in the country's national elections after 99 ballots had been counted on Monday with 31.2 percent of the vote.

The pro-European ACUM garnered 26.6 percent of Sunday's ballots and the incumbent Democratic Party was in third place at 23.8 precent.

President Igor Dodon, formerly the leader of the Socialist party, estimated that "risk is high that it could come to a snap election in the coming few months."

In turn, Democratic Party leader, oligarch Vlad Plahotniuc, said his faction was ready to launch coalition talks and  "form a functioning government and parliamentary majority for the people."

Between the EU and Russia

The Socialist Party and pro-EU Democratic Party are fighting over Moldova's future.

Dodon has pledged to renegotiate a 2014 association agreement with the European Union if his party wins the vote. The Democratic Party, on the other hand, wants even closer ties to the bloc.

The Democratic Party-led coalition government has, however, lost support following a string of corruption scandals. It has also been accused of trying to rig the political system in its favor by introducing votes on direct mandates alongside votes on party lists.

Controversy ahead of election

Allegations of fraud, corruption and poisonings had marred the run-up to the vote, with Dodon describing the election campaign as "one of the dirtiest in our entire history."

Some 3.27 million people were eligible to vote on who would occupy the parliament's 101 seats.

Moldova is one of the poorest and most corrupt countries in Europe and only recently recovered from a devastating banking scandal in 2014. The European Parliament has declared it "a state captured by oligarchic interests."

The landlocked country borders Ukraine to the east and EU-member Romania to the west.