The courts have stepped in after two blocs signed up to an unprecendented alliance to form a government after inconclusive elections in February. The coalition said it was formed in order to rid Moldova of oligarchy. 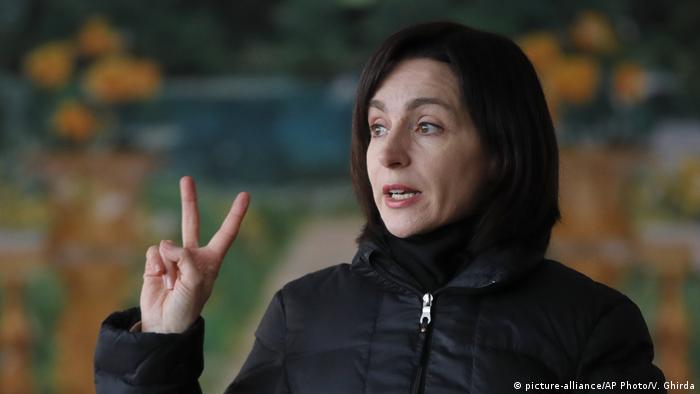 The ex-Soviet state which lies betwen Ukraine and Romania has been in political chaos since the elections in February. A deadline to form a government expired this weekend.

After months of talks, an unprecedented alliance was finally formed on Saturday between the pro-European ACUM group and pro-Russian Socialist Party of President Igor Dodon. ACUM's Maia Sandu, a former minister and World Bank adviser, was named prime minister on Saturday afternoon.

"Injustice has come to an end today in Moldova," Sandu said Saturday. "Today begins the process of the purification of Moldova."

The ACUM-Socialist Party agreement defied the Constitutional Court, which on Friday ordered parliament to be dissolved and fresh elections to be held.

The court declared all future decisions of the parliament would also be invalid.

On Sunday, the court accepted a petition from the Democratic Party made on Saturday which challenged the legitimacy of the new government and relieved Dodon from the presidency. It appointed former prime minister Pavel Filip as interim president. Reuters reported he had signed a decree for elections to be held on September 6.

Neither party won a majority of seats in parliamentary elections in February, with ACUM winning 26 and the Socialist Party winning 35 of the assembly's 101 seats.

Both parties want to keep the Democratic Party, which is led by Vlad Plahotniuc, a powerful oligarch, out of government. The former ruling party won 30 seats in February.

ACUM and the Socialist Party have accused Plahotniuc of transporting people from the breakaway region of Transnistria to polling stations and telling them to vote for the Democratic Party.

On Saturday, both parties passed a parliamentary motion that said "oligarchs" were keeping Moldova "captive."

"The oligarchs have established a dictatorship driven by manipulation, terror, lies and disinformation. The country is wallowing in corruption," it said.

The US Embassy said it "supports efforts by Moldova's political parties" to "overcome the ongoing political impasse."

The Russian Embassy echoed the US, saying it supported "efforts by parliamentary parties to form a functioning coalition."