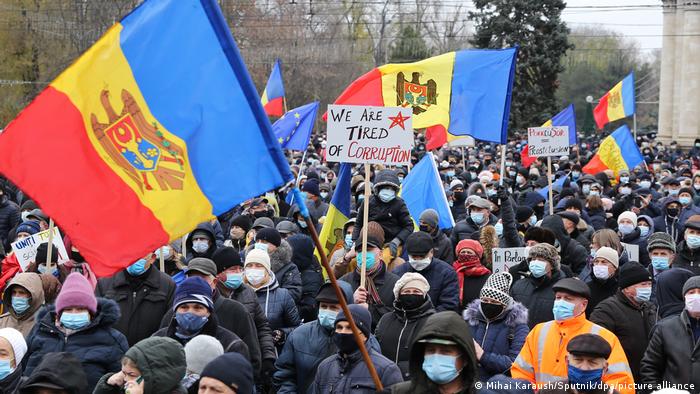 During her campaign, the pro-European Sandu had vowed to tackle corruption in the former Soviet republic of 3.5 million, which is wedged between Ukraine and NATO member Romania.

"We will go to the end until we cleanse the country of corrupt officials," Sandu told Sunday's rally. Organizers estimated attendance at some 50,000.

Sandu called on the government to resign, echoing protesters demands for fresh legislative elections. "An early election is inevitable and the shortest way to achieve that is through the resignation of the government," she said.

Opposition lawmaker Alexandru Slusari backed calls from the crowd for Sandu to be inaugurated on December 10, the day Moldova's constitutional court is expected to officially confirm her win. The inauguration is currently scheduled for December 24.

"We cannot wait for the inauguration of the president on December 24," Slusari said. "Igor Dodon will plunder the whole country in these two or three weeks."

Earlier this week, Moldova's current parliament passed a bill transferring control of the country's intelligence agency from the president to parliament.

The move was backed by Dodon's Socialist party and the party of businessman Ilan Shor, who is appealing convictions of fraud and money laundering.

Sandu accused legislators of trying to undermine the presidency before she takes office and called on her supporters to rally against the move.

Organizers of Sunday's protest accused police of blocking entry to would-be participants, including farmers on tractors protesting a hike in value added tax.

Moldova has long been divided over seeking closer ties with the European Union or maintaining traditional ties with Moscow.

Parents consider more than class size when they decide what school their kids will attend in the self-proclaimed separatist state of Transnistria. The "wrong choice" could attract the local security service's attention.

A project in Moldova is building energy-efficient homes for disadvantaged families in a bid to reduce heating costs and emissions. Apart from offering residents a warmer place to live, the venture is also creating jobs.