Maia Sandu is the first woman to become the leader of Moldova after winning almost 58% of the vote. She is in favor of closer ties with the EU while the outgoing president has begrudgingly offered his congratulations. 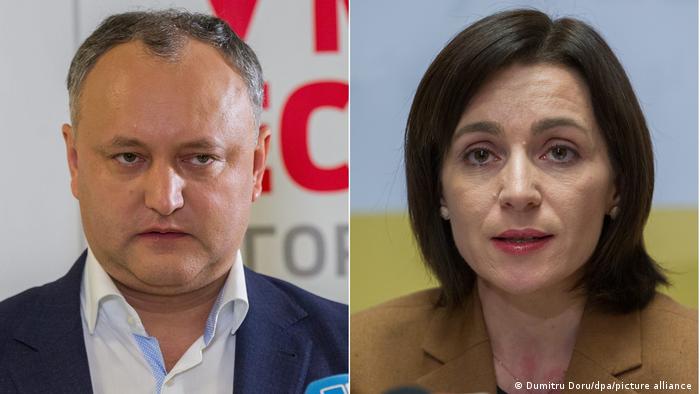 Pro-EU opposition candidate Maia Sandu won Moldova's presidential runoff with 57.75% of the vote, according to the country's central election commission.

Incumbent President Igor Dodon, who was given the explicit backing of the Kremlin ahead of the poll, won 42.25% of the votes.

Dodon said on Monday he would concede defeat if the courts find nothing inappropriate occurred in the voting process. "If the courts confirm that everything is ok, then we will put a full stop here," Dodon said.

"I congratulate her as a precaution," Dodon said in a speech carried by state news agency Moldpres.

Sandu, who leads the Party of Action and Solidarity, has promised to lead a fight against endemic corruption in the country, which is wedged between Ukraine and EU member Romania.

The country has been hit by multiple political crises and a $1 billion (€840 million) bank fraud scheme that equates to almost 15% of its annual economic output.

Following the first round of voting two weeks ago, the national electoral authority said Sandu received 36.1% of votes, while Dodon garnered 32.6%.

Police in the village of Varnita were on Sunday reported to have clashed with pro-Sandu protesters who tried to block a road to stop voters traveling from the breakaway pro-Russia region of Transnistria.

Moldova is closely linked with Romania, with the two sharing a common language. Romanian President Klaus Iohannis said he was happy with Sandu's first-round victory earlier this month.

Sandu — who worked for the World Bank and was briefly Moldova's prime minister — has received messages of support from German Defense Minister Annegret Kramp-Karrenbauer and the former European Council President Donald Tusk.

Such support was denounced by Dodon's supporters as an attempt to destabilize Moldova. Russian President Vladimir Putin last month called for Moldovans to cast their ballots for Dodon.

Moldova is under the watchful eye of Russia, which wants the ex-Soviet nation to remain in its sphere of influence at a time when several Kremlin-aligned governments are rocked by political unrest.

Despite his preferred candidate missing out, President Putin remained hopeful of good ties with Moldova and its new president.

"I expect that your work as head of state will facilitate the constructive development of relations between our countries," Putin said in a statement.

The power struggle in Moldova continues: Two presidents and two governments, with the international community being surprisingly in agreement. It stands as a test for future developments, writes Robert Schwartz.