The power struggle in Moldova continues: Two presidents and two governments, with the international community being surprisingly in agreement. It stands as a test for future developments, writes Robert Schwartz. Russia is back in big political business. For the first time since the annexation of the Crimean peninsula and the war in eastern Ukraine, Moscow has agreed with the EU and the US on a common course to free a small country, the Republic of Moldova, from the stranglehold of an oligarch who has become too powerful. In their sights is Vlad Plahotniuc, the richest man in Moldova, and a political heavyweight who controls the economy and legal system with his so-called Democratic Party. 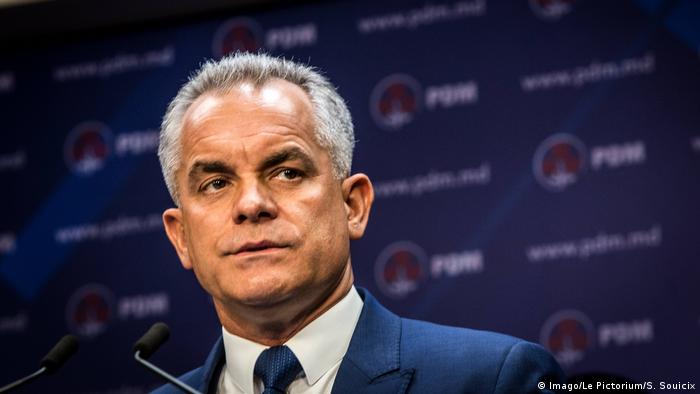 For many years Plahotniuc was able to fool people into believing his party was on a pro-European course, while concurrently doing dirty business with Moscow. All that worked until the European Union turned off the money tap and made further payments dependent on reforms — and until Russia saw through the oligarch's double-crossing. And apparently also until Washington realized that it had bet on the wrong horse.

Pressure from the EU, US, Russia

A few days before the deal was struck that kept him out of power, high-ranking emissaries from the EU, the US and Russia had met in the Moldovan capital, Chisinau, in order to persuade two completely opposite political camps to cooperate.

The pro-European alliance ACUM and the pro-Russian socialists of President Igor Dodon then actually managed to set up a coalition government at the last minute and thus herald the end of the Plahotniuc era.

The fact that Plahotniuc, with the help of the Constitutional Court he controls, does not recognize the new government and even had the president, a former ally, removed from office is nothing more than political cosmetics. A short rebellion to impress his electorate, nothing more.

Driven into a corner by foreign policy, Plahotniuc — a Moldovan Grand Duke who also holds Russian and Romanian passports — is trying to play one last trump card: In the middle of the domestic political crisis, the old government, controlled by him and still believing itself to be in office, decided at lightning speed to move the Moldovan embassy in Israel from Tel Aviv to Jerusalem. Why? To ingratiate itself with Washington and to curry favor with US President Donald Trump. It was a move much too transparent to be credible.

A chance to work together

But what happens next? This is the question that new Prime Minister Maia Sandu and her deputy, Andrei Nastase, the two leaders of the pro-European alliance ACUM, must ask themselves these days. Propelled into power by Dodon's grace, they must act quickly and decisively to avoid becoming the plaything of pro-Russian socialists.

The new special-purpose alliance must only last as long as the president does not stand in the way of implementing reforms that have been delayed for decades. Only then will it become clear how serious the Socialists really are about the new coalition. In return, the EU must release its frozen financial aid so that living conditions are tangibly improved for the people of Moldova.

It remains to be seen how serious Moscow is about cooperation with the EU and the US. As it stands, the current crisis is a chance to work with each other, not against. Moldova will probably only be a kind of test balloon for much more complicated cases — including even the political tug-of-war in Venezuela that has spelled nothing but disaster for the people. But if the Moldova experiment fails, there is a growing danger that conditions there, too, will deteriorate and will spread to the entire region.

Tired of corruption and slow EU integration, many young Moldovans are emigrating. There is no one who does not want to leave, they say. But some remain precisely for this reason, out of concern for their homeland. (03.11.2018)

A choice between EU and Russia in bad-movie Moldova vote

Moldova held a parliamentary vote with both pro-Russian and pro-EU forces accusing the ruling party of election fraud. Results are expected on Monday. (24.02.2019)

France bans use of 'steak,' 'sausage' to describe vegetarian products 47m ago

Erdogan warns Sweden, Finland that NATO accession can still be blocked 1h ago