Mir Shakil-ur-Rehman: Why Pakistan's media mogul is behind bars 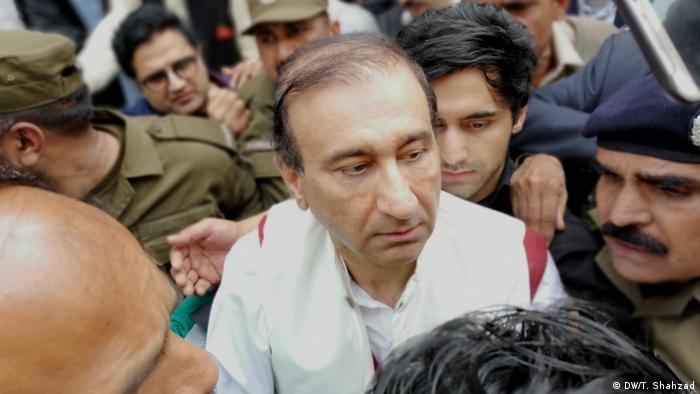 Mir Shakil-ur-Rehman (main picture), owner and editor-in-chief of Jang Publications, Pakistan's largest media group, was arrested last month on accusations of unlawfully buying a property in the 1980s. The country's National Accountability Bureau (NAB) alleges that Rehman illegally leased government land in 1986 and managed to have ownership rights transferred to him in 2016 when ex-Prime Minister Nawaz Sharif was at the helm. Sharif was Punjab province's chief minister in the 1980s.

Nawazish Ali, a NAB spokesperson, told DW that Rehman was arrested in connection with a shady real estate deal and tax evasion. He refused to talk about the current status of the investigation.

Pakistani journalists and international media organizations have dubbed Rehman's arrest as "politically motivated" and an attack on press freedom.

"The NAB had already decided to arrest Rehman. They didn't find anything against him so they opened a 34-year-old land purchase case," Umar Cheema, an investigative journalist associated with Rehman's Jang media group, told DW.

Rights activists say that Rehman's arrest has vindicated their claim that Prime Minister Imran Khan's government is trying to muzzle freedom of speech and silence critical voices in the country.

"Rehman's arrest is clearly aimed at hurting the largest media group in Pakistan. The government is cracking down on media to prevent it from giving space to the opposition. It has even imposed restrictions on social media," Adnan Rehmat, an Islamabad-based rights activist and columnist, told DW.

Battu-Henriksson said the EU was firmly committed to supporting progress on human rights, democracy and the implementation of international conventions in Pakistan. "These commitments also form a fundamental condition of the EU's GSP Plus trade preferences granted unilaterally to Pakistan," she said, highlighting media freedom in Pakistan as an area of particular concern.

"It is six weeks now since Mir Shakil-ur-Rehman was arrested on totally absurd and spurious grounds. Let's not be fooled. His arrest and detention have absolutely no legal basis," Daniel Bastard, RSF's Asia-Pacific director, said in a statement.

Opposition groups and civil society activists say space for dissent and independent journalism has considerably reduced in Pakistan since Khan came to power in 2018.

"Rehman's arrest is an attack on press freedom and NAB has been used as a hit man to harass him," said journalist Cheema.

But the government has denied these allegations. "It is unjustified to link the arrest [made] on financial wrongdoing to freedom of expression," said Firdous Ashiq Awan, Khan's special assistant for information and broadcasting.

Michael Kugelman, a South Asia expert at the Washington-based Woodrow Wilson Center for Scholars, believes Rehman's case has all the makings of a politicized arrest. "This is a senior figure with a media outlet that hasn't gotten along well with the state, and who was arrested on questionable charges tied to circumstances that go back more than three decades. While one wouldn't want to pass definitive judgment and speculate, one can say that the optics of it all are quite dreadful," Kugelman told DW.

Khan's relations with Rehman and his media group have been strained since he became prime minister in 2018, defeating ex-PM Sharif in general elections. Khan's Pakistan Tehreek-e-Insaf (PTI) party accuses the Jang group — and its popular Geo TV channel — of backing Sharif.

Jang and Dawn media groups have also been on a collision course with the country's powerful army, which many analysts allege played a role in bringing Khan to power. Khan in the past has accused Rehman and the Jang group of working against the country.

"Rehman's arrest is part of Khan's tough stance against media that dares to criticize his government or give coverage to the opposition, especially leaders of the Pakistan Muslim League (Nawaz) party," said analyst Rehmat.

Rehman's Geo TV channel has been taken off the air several times in the past few years.

"The arrest is because of his media group supporting Sharif or due to not accepting to censor. It could be one or the other, or a combination of the two. But the bottom line is that a senior figure with one of the country's top media outlets finds himself in jail on questionable charges, at a moment when Pakistan is confronting the COVID-19 pandemic that could well hit prisons hard. It is a very troubling state of affairs, to say the least," Kugelman said.