A year after Malaysian Airlines flight MH17 was downed over Ukraine, memorial services have been held to remember the 298 victims. Russia and the West remain at loggerheads as to who was responsible. 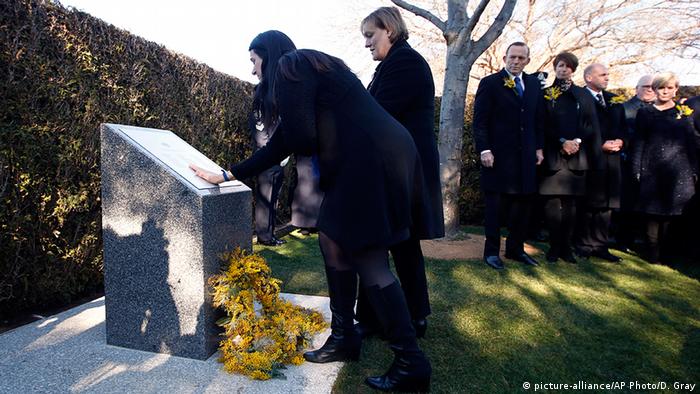 In the Ukrainian village of Hrabove on Friday, around 200 local residents gathered at a church in town before leading a procession to the crash site. Across the globe in Australia, Prime Minister Tony Abbot unveiled a plaque, inscribed with the names of the 38 Australian victims.

"Today we remember our dead, we thank those who brought them home. But most of all, we acknowledge the suffering of the bereaved," Abbot said in Canberra's Parliament Gardens. "You have had the worst year of your life. Today our nation pauses to acknowledge your tragedy."

The plaque was set in soil brought back from the crash site by a police officer.

'This was an atrocity'

Earlier on Friday, Sydney's Daily Telegraph released a video which purportedly shows Russian-backed rebels rummaging through the luggage of the MH17 passengers. Abbot said the footage highlighted that "this was an atrocity; it was in no way an accident."

Also aboard the flight which was heading from Amsterdam to Kuala Lumpa last July, were Dutch, Belgian and Malaysian passengers. 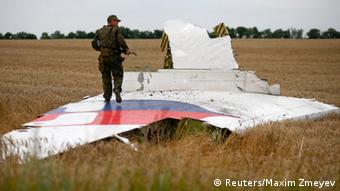 The names of all victims from the Netherlands were to be read out by victims' relatives on Friday during a service in the city of Nieuwegein. A similar memorial was held in Kuala Lumpa last Saturday due to the anniversary falling on the same day as the end of the Muslim fasting month of Ramadan and the beginning of Eid-al-Fitr.

Ukrainian authorities, backed by some independent investigators, say flight MH17 was downed by missile fire from either pro-Russian separatist rebels or Russian troops.

Ukrainian President Petro Poroshenko reiterated the accusation on Friday, saying that the high technology weapon used to shoot down the aircraft"could only have found its way into the hands of rebels via Russia."

Poroshenko called it a "moral duty" to "ensure a fair punishment for those guilty in downing the aircraft," saying the crime "represents a threat to the whole international community."

Moscow and the rebels have denied the claims, however, providing a series of alternative explanations. They say the Boeing 777 was hit by a Ukrainian warplane or a Ukrainian-fired missile during the ongoing conflict in the east of the country.

A criminal probe by detectives from Australia, Belgium, Malaysia, the Netherlands and Ukraine is currently underway. All five countries have also asked the United Nations (UN) Security Council to launch an international criminal tribunal to prosecute those responsible for shooting down the plane.

Russia, which holds a veto on the Security Council, has opposed a tribunal, however, with Russian President Vladimir Putin saying on Thursday said that a tribunal would not make sense while the investigation continued.