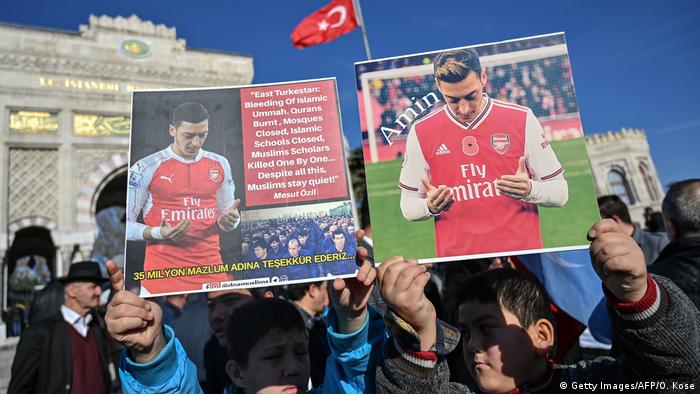 Mesut Özil has been making headlines off the pitch yet again. Less than two years after his photo op with Turkish President Recep Tayyip Erdogan sparked a discussion that soon turned sour and eventually led to Özil quitting the German national team, the 31-year-old has found himself in eye of another political storm.

On Friday, the Arsenal midfielder took to social media to offer his support for the Uighur people, while also criticizing Muslim countries for not speaking out against China's treatment of the Muslim minority group in the west of the country. China has been widely condemned after detaining up to a million people, according to human rights groups, in high-security camps in Xinjiang, northern China, a policy aimed at homogenizing the group to reflect the country's Han culture.

"Qurans are being burnt. Mosques are being shut down. Muslim schools are being banned. Religious scholars are being killed. Brothers are forcibly being sent to camps," the Arsenal player posted in Turkish on Twitter and Instagram. "The Muslims are silent. Their voice is not heard,"

By Monday, the former German international had been accused of being "deceived by fake news” by Chinese foreign ministry spokesperson and seen his shirt burnt in public by angry Chinese fans.

Özil's account on Weibo (a Chinese social media platform) is followed by some four million people and reportedly features plenty of them calling him derogatory names. The country's most famous sports news website, Hupu, has suspended all coverage related to Özil while influential Chinese communication platform Baidu Tieba has shut down a forum dedicated to Özil. On Sunday, a scheduled live broadcast of Arsenal's Premier League clash with Manchester City was shelved.

"Following social media messages from Mesut Özil, Arsenal Football Club must make it clear that these are Mesut’s personal views," the London club told DW. "Arsenal is always apolitical as an organisation."

But that hasn't always been the case. The club chose not to react when, the day before Özil's post, Arsenal defender Hector Bellerin tweeted urging people to vote in the UK elections, adding a derogatory hashtag aimed at prime minister Boris Johnson.

Back in 2018, the club's official website ran an interview with Bellerin in which the right-back outlined his reasoning for being socially and politically engaged. Previously, legendary Arsenal manager Arsene Wenger also spoke publicly about his support for Emmanuel Macron's campaign to become President in France while managing the club, comments that Arsenal made no obvious attempts to distance themselves from.

Some of the club's fans have criticized Arsenal for their reaction. "It's a sad day when business interests are seen as overriding freedom of speech and important human rights issues," a member of the Arsenal Supporters Trust told The Athletic.

The club is also sponsored by Fly Emirates, the United Arab Emirates (UAE) state airline. According to Amnesty International, the UAE discriminates against women "in law and in practice," while human rights activists have been jailed for speaking out against the regime. While some Arsenal fans and commentators have criticized such arrangements, the players have largely steered clear.

For European football clubs, the commercial attraction of China - a country of 1.6 billion people with an economy growing at between 6-7 per cent per year and a growing middle class with disposable income to spend on sports - is obvious. But Simon Chadwick, a professor of Sports Enterprise at the University of Salford, England, and an expert in Chinese football and business, says the commercial benefits clubs are keen to exploit in China come with caveats.

"If you choose to do business in China, China lays down the rules, not you," Chadwick told DW, adding that foreign partners are expected to comply not only with the country's laws but also its social norms and conventions, and shouldn't question its politics.

In the current situation, Chadwick believes Arsenal are in an "invidious" position.

"They either side with China and incur the wrath of fans all over the world, or they side with Özil, in which case that’s the end of their business in China," he says. "Or they put out a statement in the middle and nobody’s happy. But unless they say they fully endorse the Chinese position, they will inevitably find themselves in damage-limitation mode." 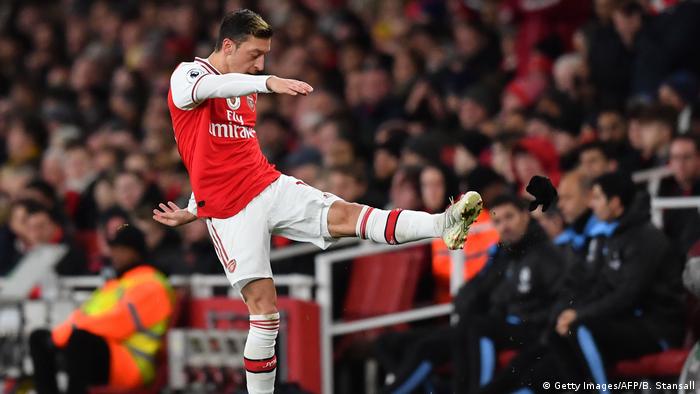 Mesut Özil reacts with frustration after being substituted on Sunday

While Arsenal's aversion to mixing politics with sport is far from unusual, it is not the only way. In Germany, clubs often go as far as calling on their fans to attend political protests. Indeed, UEFA recently acknowledged Borussia Dortmund's work in countering the far right in their local community,  with the club's social media accounts telling people to join relevant events in the city.

Furthermore, 2. Bundesliga sides Arminia Bielefeld and Hannover 96 have called for their fans to join counter protests against far-right marches that took place in their respective cities, while Bundesliga club Eintracht Frankfurt took an active stance against the far-right, populist AfD party, with the club's president saying party members will not be able to join the club as members.

Another second division side, FC St. Pauli, recently sacked Turkish striker Cenk Sahin, their most expensive signing ever, after he supported Turkey's attack on the Kurdish territories in Northern Syria.

German football clubs are more willing to engage in politics because they remain rooted in their local communities, with most clubs in the country still controlled by their members, a situation protected by the 50+1 ownership rule.

RasenBallsport Leipzig are one of the only exceptions, with the Red Bull-owned club taking a hardline stance against political messages of any sort, including cracking down on their own fans for wanting to fly a banner against a far-right protest.

Despite their tendency for more political involvement, it remains to be seen whether German clubs would stand up to an economic and geopolitical behemoth like China if it meant running the risk of losing potential fans and income.

Six Bundesliga clubs currently have offices in the country, with a view to benefitting from China's rising financial power, with Bayern Munich, Borussia Dortmund and Eintracht Frankfurt among them. Borussia Mönchengladbach, Wolfsburg and Cologne have also made the long-haul flight to Beijing for commercial purposes in recent summers.

In addition to the clubs, the German Football League (DFL) also maintains a presence in China in the form of a Beijing office. Jürgen Klinsmann and Oliver Kahn are among the big names who have been dispatched to the Far East to promote the Bundesliga's interests in the region. 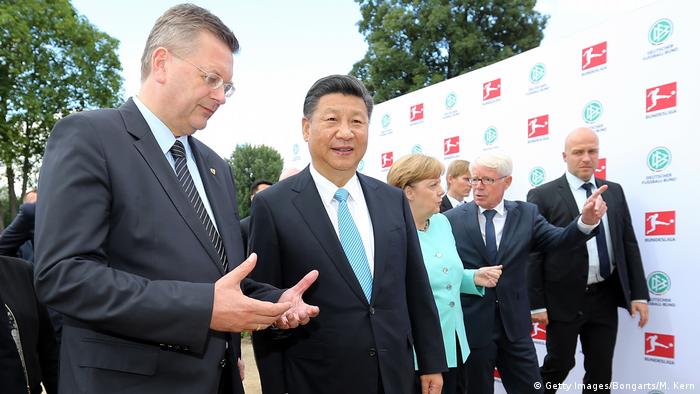 In summer 2017, the Germany Football Association (DFB) was heavily criticized after agreeing to include China's U20 team in one of Germany's fourth divisions, the Regionalliga Südwest. The DFB ended up axing the plan after protesters flew the Tibetan flag during a pre-season friendly against local club TSV Schott Mainz, causing the Chinese team to leave the pitch until the flags were removed.

"The Chinese government sees football as a policy instrument," explains Professor Chadwick. "It's a way of achieving a whole range of different goals across economy, society, culture, health, lifestyle - and also international relations and diplomacy."

However, Bundesliga side Cologne, who had previously planned to start a football school in China, will drop the cooperation with the country, at least for the time being. The club told local media that it’s due to the club wanting to focus on the "core topics" on its agenda, such as the Bundesliga relegation battle and the plans to expand the club’s training facilities. Stefan Müller-Römer, a member of the club’s members council, has welcomed the decision, mostly due to the human rights situation in the country.

“In China, human rights are massively disregarded," Müller-Römer told Cologne-based outlet KStA. "As a socially committed club owned by its members we cannot support such a totalitarian and brutal dictatorship."

With the cancellation, Cologne have answered their own ultras’ call. The biggest ultra group associated with the club, Wilde Horde, recently published an op-ed in its matchday flyer calling for the club to stop any cooperation with the country. "Human rights and freedom are more important than all the money in the world," they wrote.

As for Mesut Özil, it's unlikely that he'll retract his statements, and the media attention surrounding the matter only shows how easily a high profile sportsperson can bring attention to an issue that might otherwise remain hidden.

As Arsene Wenger, former Arsenal manager and the man who brought Özil to the club, told the club's official website back in 2014: "It's more and more difficult [to keep politics out of football] because there is a huge interest in football around the world."

Several Bundesliga clubs are active in China. As the recent controversy involving the NBA has demonstrated, while the potential financial rewards are enormous, doing business with Chinese partners can be challenging. (17.10.2019)

No protests but NBA's rift with China remains

Despite some fears of protest, or even cancellation, the NBA's preseason match in Shanghai went ahead on Thursday. Brooklyn Nets beat Los Angeles Lakers but there was plenty of political intrigue away from the court. (10.10.2019)