Bundesliga clubs have voted for the retention of German football's 50+1 rule. DW's Matt Ford welcomes the decision because it ensures that football clubs remain in the hands of those to whom they mean the most: the fans. 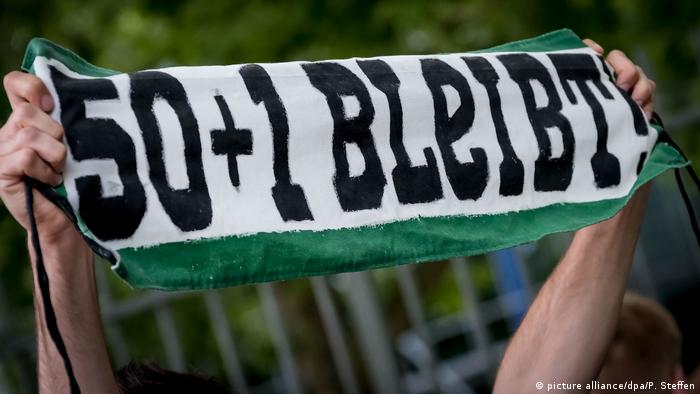 When the German Football League (DFL) called for a "fundamental debate" on the 50+1 rule, Germany's well-organized football supporters mobilized in favor of its retention.

There have been displays and banners in stadiums all over Germany and, ahead of the DFL members' meeting on Thursday, the official "50+1 stays!" campaign handed over a petition signed by over 3,000 fan groups from across the country, as fans made their voices heard – loud and clear.

Football without fans is nothing

Borussia Dortmund boast the highest average attendance of any club in Europe, including, as the club's head of marketing Carsten Cramer revealed in 2013, an estimated 1,000 British football fans at every home game.

It's a figure that can only have increased since, and I continue to encounter fans from all over the world on my regular trips to matches across Germany, from Stuttgart to Schalke, from Düsseldorf to Dresden. Why do they come?

With the best will in the world, it's not to watch the highest quality football that Europe has to offer. In terms of pure footballing quality, that is to be found in Madrid or Barcelona.

It's not to watch Europe's best players either. They play in Paris, London and Manchester — not in Stuttgart, Leipzig or Bremen. Admittedly, some play in Munich, but good luck getting hold of a ticket there.

Unfortunately, they don't come to enjoy a competitive league either, with Bayern Munich already 17 points clear in their procession to a sixth consecutive Bundesliga title.

So it must be something else. And when I ask them, the answers are always the same: The atmosphere is better. The fans have a say here. You can stand up. You can enjoy a beer while watching the match. And, most of all, it's affordable.

These are among German football's biggest and most unique selling points and they are all, either directly or indirectly, linked to the 50+1 rule, which ensures that the majority control of a football club remains in the hands of those to whom it means the most: the supporters.

Apart from a few exceptions, the supporters literally and legally have a say in the running of their clubs. It's an emotional investment and sense of belonging and pride that inspires them to generate the breathtaking choreographies and atmospheres which are the envy of fans abroad – and, ironically, the pride of the Bundesliga's marketing department.

Bundesliga clubs could increase their matchday revenue severalfold by abolishing their cheap, standing terraces in favor of all-seater stadiums with more expensive tickets, but it's a move no club's membership would ever countenance. Expensive tickets may boost income but they make supporting a team unaffordable for younger and less well-off fans.

Without 50+1, clubs risk falling into the hands of investors who don't have the best interests of the clubs, the supporters and the communities they serve at heart. In England, for every Chelsea or Manchester City, there are also historic clubs like Blackpool, Portsmouth, Leyton Orient and Coventry City which have been driven almost to extinction by rogue investors who promise much but deliver little. In Germany, see 1860 Munich.

On the other side of the Bavarian capital, Bayern are an example of what can be achieved even when adhering to 50+1. While Audi, Adidas and Allianz all hold 8.33-percent stakes, the club itself retains 75 percent, allowing Bayern to strike an almost perfect balance between lucrative sponsorships and the maintenance of a strong regional identity.

Proponents of changes to, or even the abolition of, the 50+1 rule cite the potential financial benefits of opening German football up to outside investors. They argue greater investment will help close the gap between Bayern and the rest at home and make German clubs better able to compete abroad. But at what price?

Be careful what you wish for

This season, Manchester United head coach Jose Mourinho has been critical of the atmosphere at Old Trafford. The "Theater of Dreams," he said was "too quiet" against Huddersfield and "too soft" against Brighton.

He's absolutely right, and it's not a problem that is unique to United. The same can be said of almost any Premier League match at Anfield, Stamford Bridge or the Etihad in a league where the average age of a season ticket holder is now over 40, where a whole generation of fans now consume football as a TV show, and where warnings of a "demographic time bomb" are getting louder and louder. The less said about the Emirates, the better.

Stadiums are increasingly populated by the more monied echelons of society and rich tourists from around the world, attracted by stories of an experience which, ironically, no longer exists. English football has sold its soul and Germany should be wary of following suit.

50+1 is at the heart of all that is admirable about German football and safeguards precisely that which English football has lost in its relentless pursuit of money. And if you don't believe me, go and find a English fan outside a Bundesliga stadium on any given match day and ask them why they're there.

The decision in favor of 50+1 sends a powerful message. But as FC St Pauli CEO Andreas Rettig rightly says, now is not the time for fans to sit back and rest on their laurels.

German football has to remain at the forefront of the world game and build on the incredible progress made over the past 15 years. Thanks to Thursday's vote, that progress will continue to take place within the parameters set out by 50+1.

And that's a very good thing.

The president of Hannover has halted his application for an exception to a rule that prevents him from taking a majority stake in the Bundesliga club. The DFL has called for a fundamental debate on the "50+1" rule. (05.02.2018)

Borussia Dortmund CEO Hans-Joachim Watzke has dismissed Uli Hoeness' criticism of the 50+1 rule as "nonsense," insisting the club ownership rule will not change while he is involved with the German Football League.