German Chancellor Angela Merkel has emphasized that reviving the death penalty in Turkey would be "in no way compatible" with EU membership. Other German and EU officials have also strongly rejected the proposal. 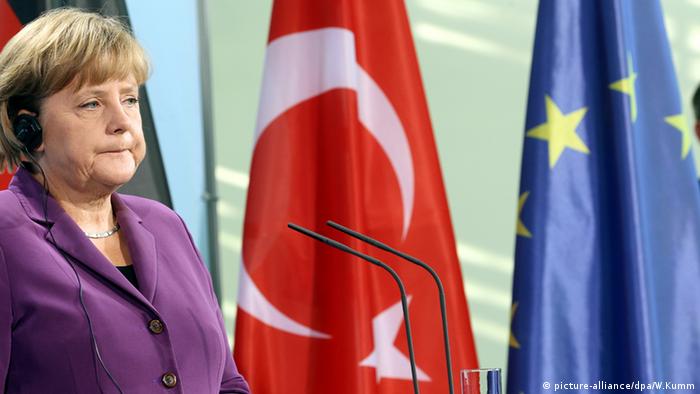 In a telephone call with Turkish President Tayyip Erdogan on Monday, German Chancellor Angela Merkel urged the leader to abide by rule of law in response to the recent attempted military coup.

The reintroduction of the death penalty in Turkey would be "in no way compatible with the goal of EU membership," read a German government statement following the phone call.

Merkel told Erdogan that with the signing of Protocol 13 of the European Convention on Human Rights, Turkey was "obligated to completely abolish the death penalty."

During their talks, Merkel also said the wave of arrests and civil servant dismissals following the attempted coup are "cause for great concern." Over 8,000 people have been dismissed from their positions in the judiciary, police and military forces.

Germany's Foreign Minister Frank-Walter Steinmeier echoed the Chancellor's comments during a meeting in Brussels on Monday.

"The death penalty is not compatible with European principles," the minister told a press conference.

Steinmeier also said that in light of the attempted coup, the possibility of encouraging changes to Turkey's criminal and anti-terror laws has sunken.

Partners in Merkel's grand coalition government have become increasingly weary of Erdogan and have been questioning Turkey's strength as a partner.

The EU's commissioner for neighborhood policy, Johannes Hahn, went so far as to suggest that the Turkish government had planned action against its opponents.

"That the lists are available already after the event indicates that this was prepared, that at a certain moment it should be used," he said in Brussels, adding that the arrests of judges were "exactly what we have feared."

Nearly 9,000 people were arrested following the attempted coup on Friday. Erdogan said there could be no delay in using capital punishment on the coup participants. He added that his government would discuss the proposition with opposition countries.