During her visit to a refugee camp near the Turkish-Syrian border, the German chancellor has shown her support for "safe zones" in Syria. Amid the Böhmermann scandal, press freedom was also a topic of discussion. 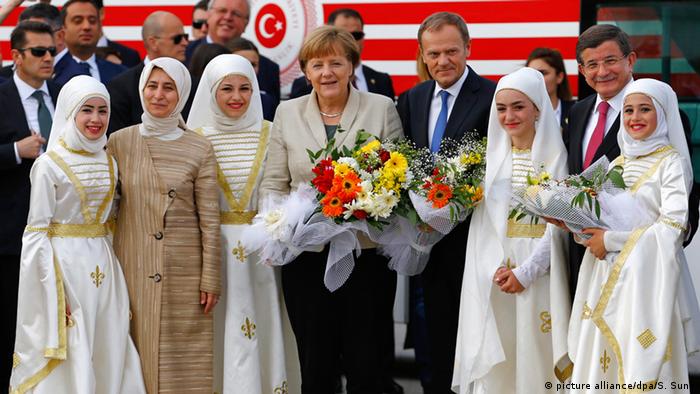 German Chancellor Angela Merkel was accompanied by the EU Council President Donald Tusk, EU Deputy Commissioner Frans Timmermans and Turkish Prime Minister Ahmet Davutoglu on Saturday, as she visited the nearly 10,000 Syrian migrants at the Nizip 1 camp. Turkey is currently hosting around 2.7 million refugees who have fled from war-torn Syria.

Merkel said Syrian refugees were welcome in Turkey and that Ankara had made the "greatest contribution" by taking in nearly 3 million migrants.

Tusk also lauded Turkey for its role in stemming the number of migrants coming into Europe, saying that "today, Turkey is the best example for the whole world [on] how we should treat refugees."

"This is not only a political and formal assessment ... this is also my very private and personal feeling," the EU Council president said.

The Turkish prime minister announced that the EU's deal on migrants was being successfully implemented and that Turkey had "fulfilled its task." The EU-Turkey agreement has led to a decline in arrivals from 56,000 in February to about 7,800 in the past 30 days, according to statistics from the European Commission.

The prime minister insisted, however, that Ankara would not readmit migrants unless the EU agreed to liberalize visa rules for Turkish citizens.

The European leaders were keen on Saturday to show how funds are helping Turkey improve conditions for the 2.7 million refugees the country is hosting. Human rights organizations, however, criticized Merkel's visit, saying it would do little to improve the plight of the migrants.

"Instead of touring a sanitized refugee camp, EU leaders should look over the top of Turkey's new border wall to see the tens of thousands of war-weary Syrian refugees blocked on the other side," Judith Sunderland of Human Rights Watch said in a statement.

The EU plans to support Turkey with 3 billion euros ($3.4 billion) to keep Syrian refugees from crossing over the Aegean Sea into Europe. The financial aid is to be used to improve the living conditions of the migrants and help them send children to school. 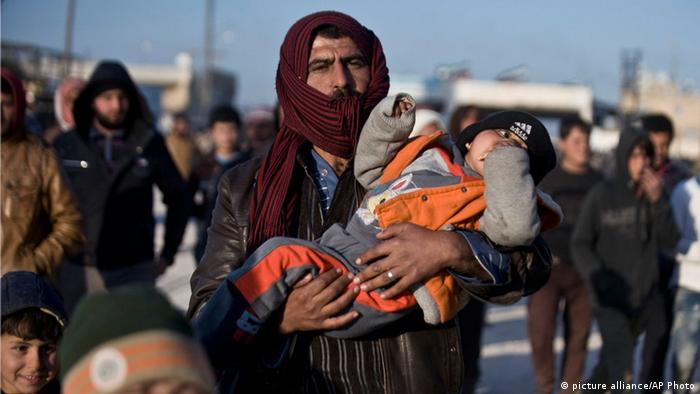 Human rights organizations criticized Merkel's visit, saying it would do little to improve the plight of migrants

During her visit on Saturday, Merkel also said that Germany was seeking "safe zones" in Syria to shelter refugees - an idea long advocated by Turkey. The proposal would help Brussels and Ankara control the influx of migrants to Europe.

The UN has warned against the "safe zones," however, unless there was a way to guarantee the safety of the refugees.

The ongoing discussion over freedom of speech in Turkey was also addressed on Saturday, with the Turkish prime minister reiterating his refusal to comply with the EU's stance on press freedom.

"We can not accept that we will be judged from above and outside," Davutoglu told a press conference. Without naming Jan Böhmermann, he criticized the German satirist's "insulting" poem about Turkish President Recep Tayyip Erdogan, claiming that "press freedom can only exist alongside human dignity."

Davutoglu's comments come amid the ongoing case in Germany regarding comedian Böhmermann's poem which targeted Erdogan. The Turkish leader has since sued the German satirist for defamation.

The Turkish president has threatened to pull out of a key deal with Brussels if the bargain is not met by June. Erdogan said Turkey wasn't feeding 3 million Syrians "for thanks." (07.04.2016)