Chancellor Angela Merkel has reiterated Germany's position against arming government forces in the Ukraine conflict. She also said she was uncertain of the chances of success for a new German-French peace initiative. 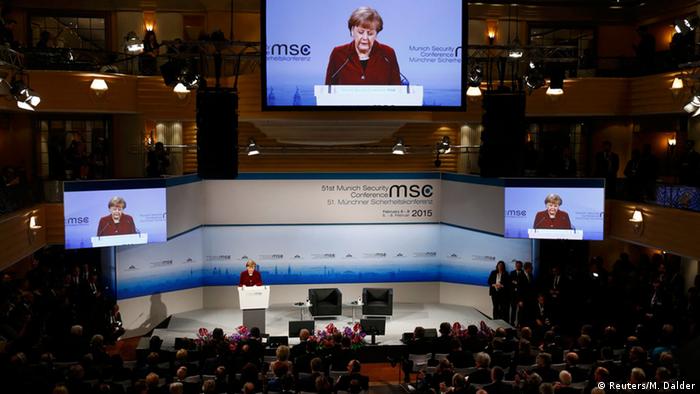 Chancellor Merkel told the annual Munich Security Conference on Saturday that Germany remained convinced that sending weapons to the Ukraine forces fighting against pro-Russia separatists in eastern Ukraine would not contribute to a resolution of the crisis there.

"The problem is that I cannot imagine any situation in which improved equipment for the Ukrainian army leads to President Putin being so impressed that he believes he will lose militarily," she said. "I have to put it that bluntly."

"This is why we have decided to focus our efforts on seeking a diplomatic solution," she added. Just hours ahead of her speech in Munich, she had returned from Moscow, where she and French President Francois Hollande had presented a new peace initiative for eastern Ukraine to Russian President Vladimir Putin.

Her comments came at a time when the United States is reportedly considering supplying weapons to Ukraine. Just ahead of Merkel's speech, the military commander of NATO, US Air Force General Philip Breedlove, said the Western alliance should not rule out the idea of weapons for Ukraine.

"I don't think we should preclude out of hand the possibility of the military option," he told a group of reporters, including DW, at the annual Munich Security Conference. At the same time he ruled out "boots on the ground."

Uncertainty about chances of success

In her address to the conference, Merkel also played down the prospects for success of the German-French peace initiative. 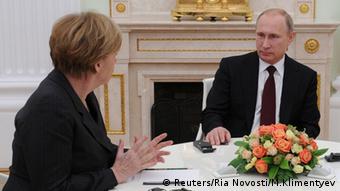 "We have not yet had sufficiently good experiences" with agreements being honored on the ground. She also said "substantial steps" were needed to "fill with life" a ceasefire deal reached in Minsk last September that was meant to bring the bloodshed in eastern Ukraine to an end.

While she conceded that it was uncertain whether the latest peace plan would work, she said that "it is from my point of view and that of the French president in any case worth making this attempt."

This was the first time she directly commented on the peace plan since returning to Germany from Moscow a few hours earlier, but she declined to discuss any details of the proposals that have been hastily thrashed out over the past few days. The chancellor is to discuss the initiative in a phone call involving Putin, Hollande, and Ukrainian President Petro Poroshenko on Sunday.

Her speech was attended by both Poroshenko and US Vice President Joe Biden, both of whom she was expected to meet on the sidelines of the conference.

Chancellor Angela Merkel has told the Munich Security Conference that Moscow must take a positive role in resolving the crisis in eastern Ukraine. She also said the conflict could not be resolved by military means. (07.02.2015)

The Munich Security Conference won't solve the world's many pressing issues. But it can provide crucial input for the political leaders whose job it is to understand the way the world today works. (06.02.2015)