The US president and German chancellor have spoken for the first time since a scandal broke out over alleged US espionage against Berlin. The White House said it wants to improve intelligence cooperation with Germany. 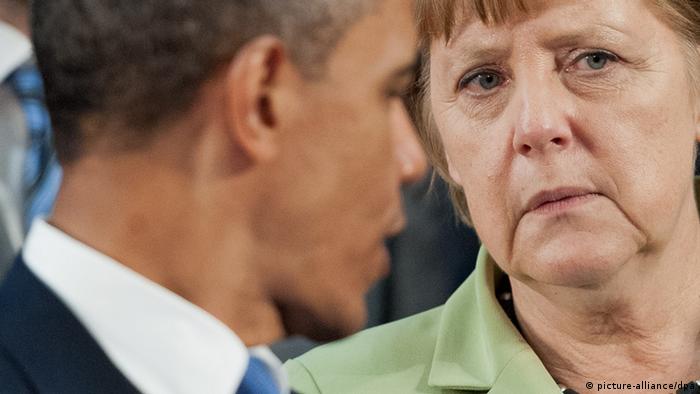 During a telephone conversation on Friday, US President Barack Obama and German Chancellor Angela Merkel discussed intelligence cooperation, amid an espionage scandal that has strained relations between the two allies.

"The president and the chancellor ... exchanged views on US-German intelligence cooperation, and the president said he'd remain in close communication on ways to improve cooperation going forward," the White House said in a news release.

Last Thursday, Berlin asked the CIA station chief to leave Germany over allegations that the US had recruited spies within the German government. A diplomatic slap of this kind is normally reserved for adversaries, not allied nations.

According to the White House, the two leaders also discussed the situations in Ukraine and Iran during their telephone call.

The spy scandal broke when German authorities detained an employee of Germany's foreign intelligence service, the BND, on suspicion of espionage. During questioning, the suspect admitted to spying for the US. He allegedly sold more than 200 documents to the CIA for 25,000 euros ($34,000).

Investigators subsequently detained an employee of the German Defense Ministry on suspicion of spying for the US. That suspect has denied the charges against him.

The US has been unapologetic about its alleged intelligence activities. White House spokesman Josh Earnest said that countries have a good knowledge of the espionage that occurs on their soil. He went on to say that private diplomatic channels, not the media, should be used to address differences of opinion.

The recent spy scandal broke as Berlin and Washington were trying to rebuild trust damaged by last year's revelations about US surveillance operations in Germany.

Der Spiegel newsmagazine reported that the National Security Agency (NSA) had tapped Chancellor Merkel's cell phone and collected the personal data of German citizens. That reporting was based on documents leaked to the press by former NSA analyst Edward Snowden.

Berlin has pushed Washington for a no-spy agreement, in which the two allies' would agree not to conduct espionage against each other. But the White House has rejected such a proposal, offering instead to engage in a "cyber dialogue" and promising closer cooperation between the two countries' intelligence services.

Two German parliamentarians suspect that their phones were tapped by an intelligence agency, according to Der Spiegel. The allegations come amid a diplomatic row between Berlin and Washington over US espionage. (14.07.2014)