Angela Merkel celebrated 70 years since the signing of the German Basic Law with a speech before young immigrants taking part in an integration program. She said Germany had learned it was a country of immigration. Chancellor Angela Merkel joined dozens of young people of immigrant background in Berlin on Tuesday to celebrate the 70th anniversary of Germany's Basic Law, or constitution.

The event was hosted by Deutschlandstiftung Integration (DSI), a foundation that in 2012 founded the Geh Deinen Weg ("Go Your Way") program to help young and ambitious people of immigrant background find a way into the German job market.

The purpose of the event was to highlight the connection between the Basic Law and the lives of those of immigrant background in Germany. Many of the dignitaries who spoke at the event quoted the Basic Law's famous first article: "Human dignity shall be inviolable," which Christian Wulff, former German president and now head of the DSI, described as "perhaps the most beautiful line in the German language." 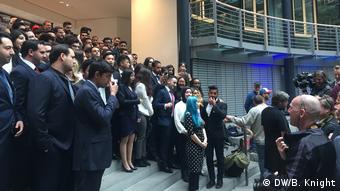 Dozens of young immigrants took part in the event

The Basic Law and immigration

"We cannot take it for granted that a constitution should stand the test of time for seven decades as the foundation of lived freedom, democracy, and rule of law as our Basic Law did," said Merkel. "Diversity, including through immigration, has been here in the heart of Europe for centuries. ... We have learned how immigration has changed our country, and how it will continue to change our country, and we have learned that our country must be a country of immigration, as well as of integration."

It was with this in mind that Merkel mentioned those constitutional articles that dealt with equality, particularly Article 3: "All persons shall be equal before the law. … Men and women shall have equal rights. The state shall promote the actual implementation of equal rights for women and men and take steps to eliminate disadvantages that now exist," as well as Article 5, which guarantees freedom of speech and the press.

Both Merkel, who is the DSI's patron, and Wulff used their speeches to highlight the connection between the constitution and diversity, and underline that the Basic Law sets out principles that needed to be brought down from the abstract to be implemented every day. Indeed, as part of its government-funded 70th anniversary Basic Law campaign, the DSI has appointed "ambassadors" of immigrant background for individual articles.

One of these, chosen to represent the first article, was also honored with a prize called the "Talisman" at Tuesday's event, in recognition of her work for "social engagement for integration." The recipient, Margot Friedländer, a 97-year-old survivor of the Nazi concentration camp Theresienstadt, returned to her native Berlin in 2010 — a decision she said she "never regretted."

The Go Your Way program is open to anyone between 18 and 29 of immigrant background and "special professional, school, university, of sports qualifications." Every year, only some 150 candidates are taken on, and, rather than receiving financial support, they are matched with a "mentor" who is supposed to help them find an appropriate place. 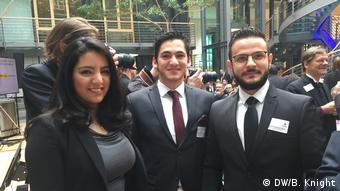 One of its participants was Mohammad-Mouaz Narbi, who arrived in Germany from Syria three years ago, and is now training as a salesman for the supermarket chain Edeka, one of the DSI's corporate partners.

"This program is very important for me in particular because I came from a warzone myself," he told DW. "It gives you the opportunity to get a mentor who supports you privately, and in your job, and helps you to develop."

Turkish-born Mohamed Fachrou, who has just completed his Masters in electro-technology, is now using the program to look for work in electro-mobility industry. "The GDW stipend was created to give people a chance who have a migration background, who might find it difficult on the job market or at school," he told DW.

"The program is there so that we can maybe find our paths together, bring our own value to it and profit from each other," said Hosay Adina-Safi, a research assistant at the University of Hamburg. "The program is about building up a network to show that we are part of society and help to form it."

The event, however, did not pass without the odd note of criticism. Delal Atmaca, head of the Berlin-based DaMigra organization, which defends the rights of migrant women, praised the "strong words" of both the chancellor and the former president, but wondered how well the Basic Law was being implemented in Germany.

"Asylum-seekers are often subject to residency laws that mean they cannot leave certain areas, which restricts their freedom of movement," she told DW. "Also Germany signed the Istanbul Convention, which is designed to protect women from violence, and I hope the chancellor's strong words will be backed up."

Refugees in Lower Austria are to be issued with "Ten Commandments of Immigration" by regional authorities. Included in the edicts is a requirement for migrants to show gratitude to the country. (13.05.2019)