Germany has signaled support for the American military action - without explicitly backing it, calling the strikes "limited and targeted." But the opposition criticized the Trump administration's move.

Speaking at an event for refugee helpers in Berlin, Angela Merkel once again condemned the "chemical weapons massacre of innocent people in Syria" and implied that the US missile strikes in response were justified.

"We all know that chemical weapons are condemned internationally and that anyone who uses them commits a war crime," Merkel said, calling the US response "limited and targeted."

Merkel also reiterated an earlier statement she issued together with French President Francois Hollande that Syrian leader Bashar al-Assad was "solely responsible for the latest developments."

"In view of the dimensions of this war crime, the suffering of innocent people and the blockade in the United Nations Security Council, the attack by the US is understandable," the conservative chancellor said.

Defense Minister Ursula von der Leyen said on Friday that German Tornado reconnaissance jets would not provide assistance for further US attacks on Syria. Speaking to German broadcaster SWR von der Leyen said the German jets had a clearly defined role within the international coalition to carry out reconnaissance for missions against the so-called "Islamic State." The US had not asked for any German assistance ahead of the US missile attacks on the Syrian airbase, she said.

President Trump full remarks on US strike on Syria

Earlier this week Russia blocked a UN Security Council resolution that would have condemned the chemical weapons attack.

Merkel stressed that diplomatic work was now needed to resolve the conflict in Syria.

"It remains right and crucial to devote all our energy to discussions in the UN Security council and in Geneva in to order to arrive at a transitional political solution in Syria and put a democratic end to the Assad regime," Merkel added.

Understanding but not supporting

The German government's line is essentially that the Assad regime's crimes against humanity are so bad that they justify US President Donald Trump's decision to take unilateral action. At the government's Friday press conference, spokespeople for the chancellor and the Foreign Ministry refused to be drawn in on the question of whether the US missile strikes themselves might not be a violation of international law. Instead, they repeated multiple times that the US action was "understandable." 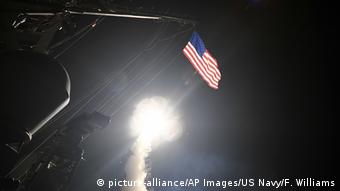 The hope is that there will be no escalation of the conflict - particularly between the US and Russia - and that the missile strikes might serve to rein in the Syrian leader.

"I think this targeted attack aims at preventing the Assad regime from using chemical weapons again and ensuring that it never again comes to such horrible crimes against humanity," Foreign Ministry spokesman Sebastian Fischer said.

A Defense Ministry spokesperson said that the ministry had been informed of the action shortly before the missiles were launched. And Fischer emphasized that the government had enough sources to think it "highly probable" that Assad was behind the chemical attacks which killed more than 80 people in Khan Sheikhoun.

But there is a difference between probability and certainty. And Merkel and her government have stopped pointedly short of explicitly declaring their support for the actions of Trump, with whom relations have been difficult, if not positively frosty.

Lack of clarity from Schulz

Earlier on Friday, Foreign Minister Sigmar Gabriel of the Social Democrats (SPD) also said that the US missile strikes were "understandable."

But Martin Schulz, the SPD chairman and candidate for chancellor in this year's national election, who is not part of the government, was less clear about where he was aligned.

"For too long we Europeans have only been looking on to the US and Russia," Schulz said.

The SPD chairman said that Europe would act "politically and not militarily" and called for a return to the negotiating table.

"This is the hour for talks, not bombs," Schulz said, adding that he found it "more than unsettling" that the UN had not been able to formulate a "clear answer" to the poison gas attacks.

"The Security Council was incapable of doing that," Schulz said. 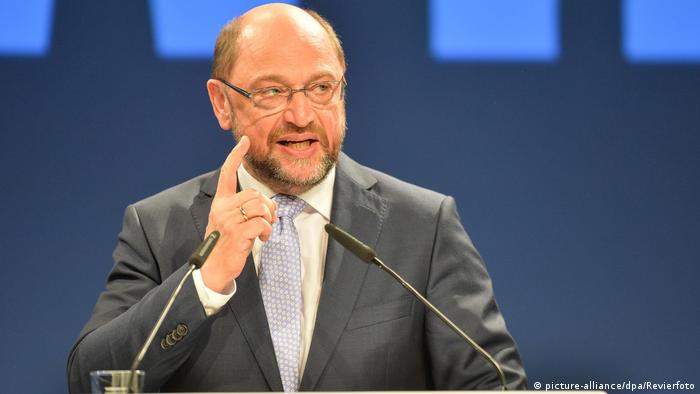 If Schulz appeared to be hedging his bets, the German opposition minced no words in criticizing the unilateral American action.

"The US military escalation must be stopped immediately," Left Party co-chairs Sahra Wagenknecht and Dietmar Bartsch said in a statement. "Last night's US missile attack, which violated international law, puts Syria further away from a peaceful solution and has given IS cause for celebration."

The Left Party said Germany needed to focus on preventing the conflict between Washington and Moscow over Syria from escalating.

"Instead of reflexively getting behind Trump, the German government should do everything in its power to stabilize relations between Russia and the US," Wagenknecht and Bartsch said. "The current situation is extremely dangerous and could get out of control at any time."

Green Party foreign policy expert Jürgen Trittin surmised that the domestic political situation in the US and not a desire to protect the innocent had inspired the missile strikes.

"I think that concerns for international law played less of a role here than the fact that throughout the US presidential campaign, Donald Trump portrayed Barack Obama as a wimp," Trittin told German radio.

And in their official statement, the Greens said: "Even if Russia keeps the Security Council from acting, as it emerged a few days ago, unilateral military action is not right."

US fires cruise missiles on Syria – the first reactions

EU politicians and a former weapons chief have urged for an investigation into a suspected chemical weapons attack in Syria following a US missile strike. European leaders also called for the resumption of peace talks. (07.04.2017)