EU politicians and a former weapons chief have urged for an investigation into a suspected chemical weapons attack in Syria following a US missile strike. European leaders also called for the resumption of peace talks. 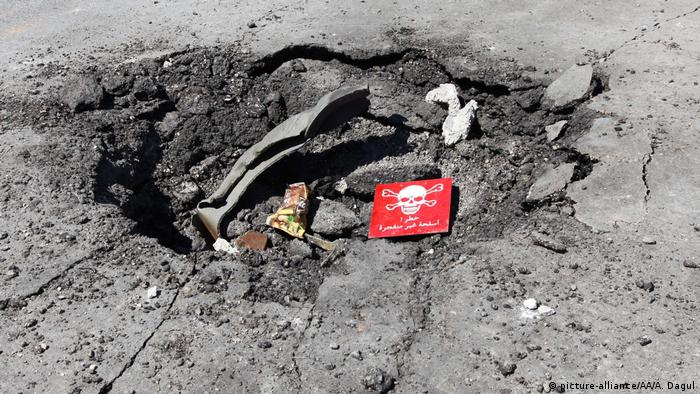 Europeans went to bed horrified by mounting evidence that the Syrian regime had used chemical weapons against its own people. They woke up on Friday to news the US had punished the Syrian government for the act with airstrikes.

The European Union's top leaders came out early if not in outright support of the military action, at least blaming Syrian President Bashar al-Assad for provoking it.

European Commission President Jean-Claude Juncker said the EU had been notified by the Trump administration in advance of the missile strikes. "The US has informed the EU that these strikes were limited and seek to deter further chemical weapons atrocities," Juncker said in a statement. "The repeated use of such [chemical] weapons must be answered. There is a clear distinction between air strikes on military targets and the use of chemical weapons against civilians."

Mogherini says OPCW should go back in

EU foreign policy chief Federica Mogherini weighed in with much the same tone, concurring that the strikes were launched "with the understandable intention to prevent and deter the spread and use of deadly chemical weapons," but also underscoring that this is not a solution. She called for the involvement of the Organization for the Prohibition of Chemical Weapons (OPCW), working together with the UN, to investigate. "Those found responsible should be sanctioned within the framework of the United Nations," Mogherini said in her statement.

It's clear not all European leaders are comfortable with the development, however, especially given the appearance of abandoning the UN when the Security Council's effort to condemn and investigate the incident ended up, as often happens, stalemated by a veto, this time from Russia.

Dutch Foreign Minister Bert Koenders called the US strike a "firm warning" to the Assad regime, while underscoring the need for diplomacy. German Foreign Minister Sigmar Gabriel echoed that sentiment, urging the resumption of peace talks. "As understandable as a US military strike against military structures is after the failure of the Security Council," he said, "it's just as crucial to look at joint peace efforts in the framework of the UN."

Blix says no blame for inspectors

One man who knows first-hand the difficulty of balancing the politics of chemical warfare is  a former head of the International Atomic Energy Agency, Hans Blix, who also later served as the head of the UN Monitoring, Verification and Inspection Commission. Blix is of two minds about the US move. 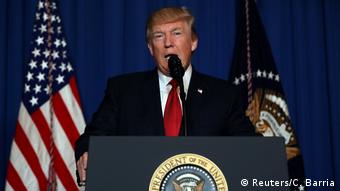 In an interview with DW, the Swedish diplomat said he could appreciate that most of world opinion, having been "rightly indignant" about the gas attack on Syrian civilians, will approve of the missile strikes. Blix says he thinks the retaliation was "measured" and specific, and he doesn't think the Trump administration is planning an "all-out war" in Syria.  But he did, however, criticize the fact that the US made the decision to carry out the strikes unilaterally, hastily and without making a legal case that they were justified, which he refers to as the US acting like the "world's sheriff."

"I don't know whether in Washington they presented any evidence, but I did not see that in the Security Council," Blix said. "Merely pictures of victims that were held up, that the whole world can see with horror, such pictures are not necessarily evidence of who did it."

Blix says the problem with this situation is that while it's natural to jump to the conclusion that the regime is far more likely than the rebels to have the means to carry out an attack of this magnitude with a substance such as sarin gas, it is far from proven that it did so.

And those distinctions matter, Blix insists. "If you had a murder and you strongly suspect one fellow, do you go to judgment and execution straight away?" he asked. "Three days after the murder?"

Russian President Vladimir Putin, Assad's strongest backer, is calling the US missile strikes a violation of international law. Moscow's explanation for the blast of deadly gas is that the opposition had it stockpiled and a regime rocket released it.

Koert Debeuf, director of the Tahrir Institute for Middle East Policy, says that's just not credible. "The only government that believes this is Russia," he told DW. "No one else believes this story, that it was again some kind of accident. It's very clear; it's not the first time. We have seen these horrors many times before." 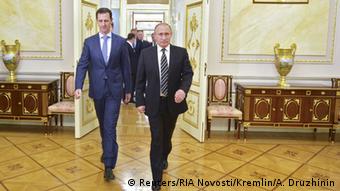 Putin has provided Assad with military assistance in Syria

It was in fact another of these horrors - the sarin attack that killed hundreds of civilians in Ghouta in 2013 - that led former US President Barack Obama to threaten airstrikes against Assad, after which the Syrian leader agreed to submit his chemical arsenal to the OPCW for its destruction. Between then and 2015, a UN-OPCW team oversaw the neutralization of 600 metric tons of potentially deadly substances. Under that agreement, Damascus shouldn't have any sarin to deploy on civilians.

The obvious problem, notes chemical-weapons and security expert Dan Kaszeta, is that such a process relies on the cooperation and veracity of the participants. If a government wants to hide something, Kaszeta pointed out, inspectors are virtually helpless to find it. In the case of Syria, they were also in the middle of an active war zone. "You couldn't even do it in a peaceful law-abiding country," he observed. "You couldn't do it in Great Britain or Belgium because the OPCW inspector doesn't have a search warrant to go into somebody's house."

Kaszeta, who analyzed many hours of video of the aftermath of the 2013 Ghouta attack, says Assad could either have hidden supplies of sarin or other deadly gases or reconstituted his earlier arsenal, doing either with impunity. Signing the OPCW agreement in 2013 gave him a "'get out of jail' card," Kaszeta said, "a 'do not bomb me' pass from Obama."

Now that this pass has expired, observers are wondering what impact the missile strikes will have on the Syrian regime's willingness to negotiate the peaceful conclusion for which European leaders are urgently calling. But it's the Kremlin that has reacted first and most vociferously.

Russian Prime Minister Dmitry Medvedev declared that the US strikes were illegal and put the US "one step away from military clashes with Russia."