Merkel calls for bilateral ceasefire between Ukraine and Russia

German Chancellor Angela Merkel has called for a ceasefire from Russia and Ukraine at talks with Ukrainian President Petro Poroshenko in Kyiv. She said the territorial integrity of Ukraine was "essential." 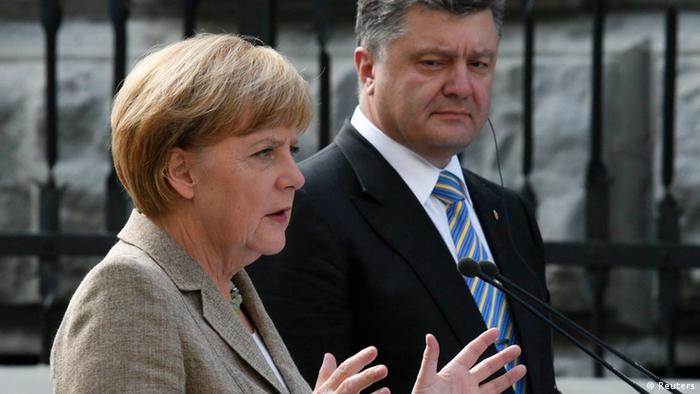 On her first visit to Ukraine since the crisis between Ukraine and Russia began early this year, Merkel called on Saturday for Moscow to engage in a peace plan with Kyiv. She said success was not possible if only one side was interested in a diplomatic solution.

"There must be two sides to be successful. You cannot achieve peace on your own. I hope the talks with Russia will lead to success," said the German Chancellor.

"The plans are on the table...now actions must follow," said Merkel, adding that peace is possible in Ukraine but that a ceasefire, agreed with both sides, would be necessary.

Merkel, who has been spearheading efforts to resolve the crisis in Ukraine, said the lack of controls along the Ukraine-Russia border was the main obstacle standing in the way of a ceasefire between Ukraine forces and pro-Russian separatists.

"The significance of my visit is that the German government (believes) that the territorial integrity and well-being of Ukraine is essential," she added.

Poroshenko agreed that, "Ukraine along with our European partners and the whole world will do everything for this to happen but not at the expense of the sovereignty, territorial integrity and independence of Ukraine".

Germany has also been a major force behind the imposition of economic sanctions on Moscow, which many in the West suspect of supplying the rebels with weapons.

However, speaking in Kyiv on Saturday, Merkel said that although new sanctions are not the main consideration at the moment, they could not be ruled out if the situation deteriorates in the future.

Since the outbreak of the crisis over four months ago, Merkel has regularly put pressure on Putin to use his influence on the separatists to bring an end to the fighting.

Pro-Russian rebels have taken over considerable amounts of territory in the east, declaring some regions as "people's republics."

The talks, which were held ahead of Ukraine's Independence Day, which falls on Sunday, came just a day after Russia drove an aid convoy into eastern Ukraine, prompting Ukrainian accusations of a direct invasion.

According to media reports, the 260 vehicles from the convoy have now returned to Russia.

Ukraine and Western countries said they suspected that the convoy could be used by Russia to smuggle supplies and reinforcements for rebel fighters, although Moscow has repeatedly denied this and insisted that the convoy was carrying humanitarian aid for civilians affected by the fighting.

Both Merkel and US President Barack Obama condemned Russia's actions in sending the convoy into Ukraine without governmental permission.

According to figures from the United Nations, more than 2,000 people have died in fighting since the crisis began.