Medvedev, Putin grapple for power in Moscow | News and current affairs from Germany and around the world | DW | 19.03.2010

Russian President Medvedev made it clear from the beginning that he does not stand in Vladimir Putin's shadow. Two years into his presidency, Medvedev is making a play for more power as he seeks to assert himself. 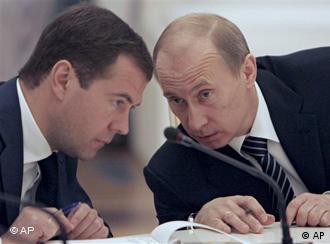 However, two years into his terms, Medvedev is beginning to display an independent streak, openly disagreeing with Putin, and urging Russia to make reforms in a number of areas. Putin, meanwhile, has announced he is considering a run for the Russian presidency in 2012, which would likely keep Medvedev out of the race.

There have also been public disagreements between the two, something unheard of in Medvedev's early days as Russian president.

Medvedev has said that Russia needs a "stably functioning multiparty system" of government - currently Russian politics are dominated by Putin and Medvedev's United Russia party - and said that Russian government needs to serve as the "protectors of small peoples." Both of these statements contrast with Putin's more muscular rhetoric about Russia's one-party government.

Now the question that has been asked since Putin escorted Medvedev to his victory rally in Red Square in March 2008 is being asked again: does this rhetoric signal that Medvedev will use his presidency to enact liberal reforms within Russia, or is his rhetoric empty?

Despite recent comments, most of the western world believes that Medvedev is simply a figure head and that Russian power lies solely with Putin. The former president is widely popular with Russians, who believed it was his strong hand that allowed Russia to emerge from the chaos of the late 1990s and return to the superpower status in the last decade.

Some of Medvedev's actions have done little to change this perception. He has made few changes to senior staff as president, and has let Putin commandeer the spotlight at will.

However, in recent months, Medvedev has shown small signs of rebellion. He chairs a think tank which recently called for a Russian president who has power over the higher levels of government, and a prime minister who runs the lower levels of Russian bureaucracy. 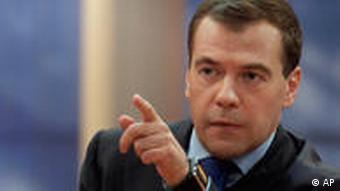 He has also taken shots at the Putin presidency, which he said was rife with corruption. He has gone as far as to institute measures to try to combat bureaucratic malfeasance.

Medvedev has also said economic reforms enacted by Putin have failed, because the energy sector was the only sector of the economy to thrive. When energy prices fell, Russia suffered.

The economy criticism is particularly acute as many Russians struggle to overcome not just the financial crisis, but an economy whose strength is located in the western part of the country. Russia's vast east has yet to experience the growth that Moscow and St. Petersburg have, making it a ripe for anti-Putin sentiment to ferment.

In recent days, Medvedev has said publicly that it is he, not Putin, who runs Russia, a rare statement coming from an elected head of state.

Despite Medvedev's claim, Putin remains the Russian figurehead and its most potent symbol of power. When Medvedev has managed to gain the spotlight, it is only because Putin has ceded it to him, says Konstaine Sonin, a professor at the New Economic School in Moscow. 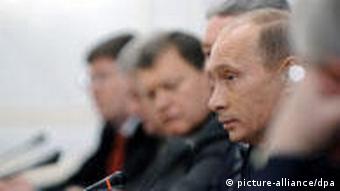 "Putin is the symbol of power," Sonin told Deutsche Welle. "It doesn't matter if he is the president or the prime minister."

Sonin said that the only reason Medvedev is president is that he was chosen by Putin. Medvedev came to the presidency from Gazprom, where he was the company's president.

From the start of the presidential campaign, Medvedev was associated with Putin. Putin gave Medvedev his blessing on national television in the run up to the elections and the two appeared in campaign posters together.

Sonin says that Putin is so powerful that he has essentially wrestled all presidential power from Medvedev and into the prime minister's office.

"I have never thought and or don't now think Medvedev is an independent player," he said. "If for some reason Putin is to die tomorrow of natural causes, we have a wide open field in the power struggle. Medvedev is not even a contender."

Mitchell Orenstein, a professor of European studies at Johns Hopkins University of Advanced International Studies, said that concern over who is in charge in Russia is more of an American pastime than a European one. 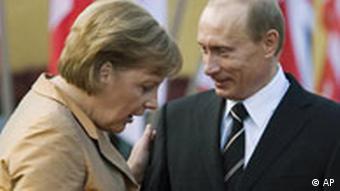 Orenstein says that Europeans are more willing to accept Russia as is. For instance, Germany, which has criticized Russia on issues like human rights, is a willing business partner, and calls for more cooperation with Moscow.

"A lot of US enthusiasm about Medvedev might be called typical American naiveté," he told Deutsche Welle. "Europeans tend not to be swayed by liberal rhetoric about Russia."

Medvedev calls for reforms but tiptoes around Putin's legacy

Russian President Dmitry Medvedev has called for a sweeping modernization of the country. While not criticizing his still-powerful predecessor, Vladimir Putin, Medvedev recommended several breaks from Putin's legacy. (12.11.2009)

German Chancellor Angela Merkel and Russian President Dmitry Medvedev join a bilateral forum underway in St. Petersburg on Thursday, but will it be "business as usual" for the two partners? (02.10.2008)