Marco Reus has been awesome, and Borussia Dortmund need him to be | Sports| German football and major international sports news | DW | 26.01.2019

Marco Reus has been awesome, and Borussia Dortmund need him to be

Borussia Dortmund returned to their high-flying, goal-scoring ways against Hannover. Why? Because Marco Reus returned to the side. Dortmund's title aspirations may still be linked to their captain's ability to stay fit. 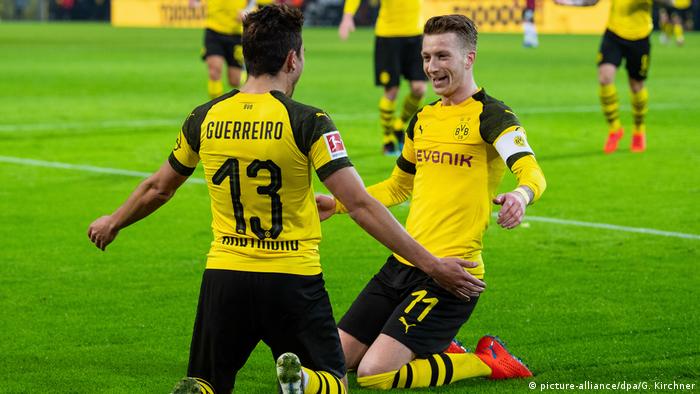 After injury ruled him out of Dortmund's game against Leipziglast week, Marco Reus returned to deliver a reminder of how important he is for his team.

The 29-year-old captain scored one and assisted another in the second half of a 5-1 drubbing of Hannover on Saturday. Reus now has 12 goals and nine assists in the Bundesliga this season, the most goal contributions of any player in Germany's top-flight.

His performances have been a welcome sight for the Bundesliga leaders who, last season, did not have the advantage of a fit Marco Reus. This campaign though, is a very different story.

Reus' availability has deeply influenced Dortmund's success, even though he has missed nearly half of the club's games in the past two and a half seasons. During that time frame, BVB have won 62 percent of the games in all competitions with Reus, and just 47 percent of the games without him.

Dortmund's dependency on Reus revealed itself in Leipzig last week, a game that Dortmund won but looked short of creativity in attack. Dortmund had the quality, but lacked a spark. They were missing Marco Reus.

It was no coincidence that Dortmund was firing on all cylinders in Reus' return, even if it came against a Hannover side currently in the drop zone. Alongside his goal and assist, Reus had four shots, two key passes and even hit the post in the first half.

If anything, Reus is showing this season how much of a force he is when he is fully fit. He has been involved in 26 goals in all competitions this term - just one fewer than in the previous two seasons combined.

His reunion with Lucien Favre, who coached Reus for a year at Borussia Mönchengladbach in 2011-12, has been glorious thus far. The captain's armband, which Reus received at the start of the season, also appears to have unlocked another level of confidence.

This side of Reus has truly been a delight to witness, but Dortmund's title aspirations may still be dependent on him staying on the field.

Daniel Caligiuri's brace stole the spotlight and won the points for Schalke against Wolfsburg on Sunday. But Domenico Tedesco's decision to axe captain Ralf Fährmann was bold and vindicated, writes DW's Matt Pearson. (20.01.2019)

Peter Bosz shows no signs of learning from past mistakes

Dutch coach Peter Bosz was back in the dugout for his first Bundesliga game after departing Dortmund in 2017. As his Leverkusen side lost against Gladbach, it was hard not to feel a worrying sense of deja vu. (19.01.2019)