Borussia Dortmund have started 2019 as they started this season - in form. Another flurry of goals helped them beat their latest opponent, but it was one man who stole the show again. 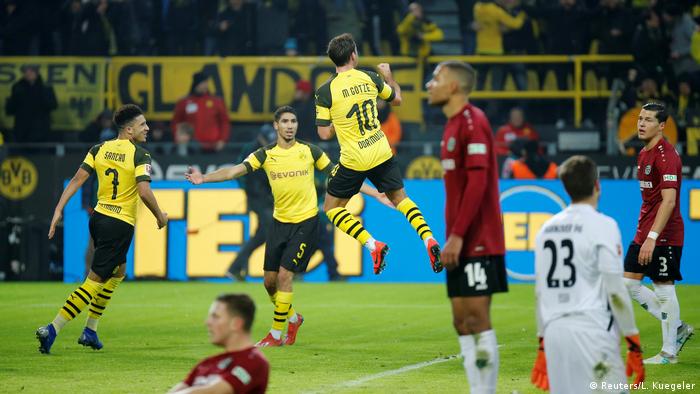 It took Lucien Favre's side a while to get going, but thanks to a seven-minute flurry in the second half, Borussia Dortmund put the pressure back on Bayern Munich (who play on Sunday) to close the gap.

Hannover, struggling near the bottom of the table, might have taken the lead inside the first few minutes, but Roman Bürki made a strong save to keep out Hendrik Weydandt's header. From that point on, Dortmund grew into the game with Hannover looking unable to stop them.

After missing a handful of chances, the home side eventually went ahead. Achraf Hakimi smashed in a beauty after a neat one-two with Raphael Guerreiro to give Dortmund a deserved lead.

In the second half, Reus inspired Dortmund to victory. The BVB captain scored a beautifully judged finish off his own, before starting the play that Götze eventually finished off. Just four minutes later, Reus split Hannover's defense and Guerreiro had his goal.

At that point it looked like Dortmund might run up a cricket score, but the pace of the game slowed and Hannover did their best to avoid further embarrassment. There was time for Marvin Bakalorz to score a consolation, but Dortmund had the last word when Axel Witsel sent a low drive in off the post.

It was Dortmund's day, but it might be Hannover who steal the headlines as speculation surrounding how long head coach Andre Breitenreiter has in the job will grow after this result. 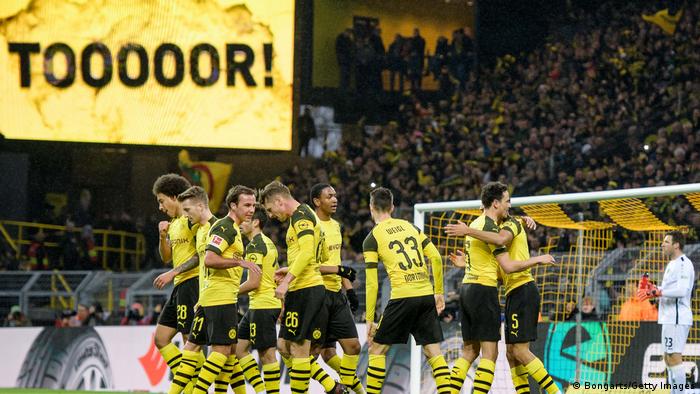 Dortmund were dominant once again, scoring five goals past a struggling Hannover

89' GOAL! Dortmund (Witsel) Just when you thought there wasn't anything left in this one, Witsel hammers in a low drive from way out and it goes in off the inside of the post. A beauty. And that is that. The game is over, and Dortmund are clear and deserved winners.

87' GOAL! Hannover (Bakalorz) Well, that's something for the traveling fans. Marvin Bakalorz goes on a direct and driving run from midfield, Witsel can't stop him and his shot deflects in off a teammate. Bürki is furious, likely that he was allowed to run virtually in a straight line, but also that he no longer has a clean sheet. Won't change the outcome of this one, but it shows there's some life left in Hannover yet.

81' It seems Dortmund are content with a four-goal lead. Or perhaps Hannover have sorted themselves out. The game is winding down now, after that seven-minute flurry earlier. Bayern Munich are expected to win tomorrow against Stuttgart, but if they don't Dortmund's lead could be as great as nine points.

76' Dortmund can decide by how many goals they want to win this one, especially given Alcacer is on now. Dahoud is about to come on (likely for Delaney I think). Hannover just doing their best not to concede any more goals. What a tough time for this club. Their fans though, have been as loud as ever.

71' CHANCE! Hannover's attempt to clear the ball goes so badly it puts Reus through, but he chips it wide. That could have been five... What a day Marco Reus has had.

67' GOAL! 4-0 Dortmund (Guerreiro) Well this is just embarrassing now for Hannover. Reus plays a perfect pass that slices through Hannover's centre backs and Guerreiro slots home, almost casually. When they're good, they're good but their opponents are also crumbling. Oh and Alcacer is on for Götze (great news for Hannover fans).

63' GOAL! 3-0 Dortmund (Götze) It really is all over now. The referee gives a great advantage after a foul on Reus in midfield, Sancho bursts down the left. Instead of playing in Hakimi on the overlap, the teenager cuts in, drawing Hannover's defense towards him. Götze appears on the right, Sancho picks him out and, with that much space and time, he makes no mistake. 3-0. Another win is on the way.

60' GOAL! 2-0 Dortmund (Reus) What a mistake by Albornoz, and that is game over (most likely). He gets tangled up with the ball near his own goal, with little pressure, Hakimi jumps in and tees up Reus who clips a perfectly sliced finish, like a golf shot out of the bunker spinning back towards the hole, that curls in despite Hannover's attempts to block it. Marco Reus, making the difference again. 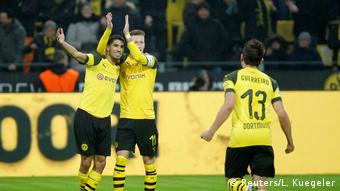 57' Guerreiro shoots from range, but easy for Esser. The game has moved into cruise control mode. Dortmund are keeping the ball, mostly without difficulty, and Hannover are chasing in the hope of springing a surprise.

50' No one really bursting out of the blocks so far. Dortmund with more of the ball but that's about it. Maybe Paco Alcacer comes on sooner rather than later?

46' Dortmund get us back underway.

HALFTIME Dortmund ahead, and deservedly so, but it has been a scrappy game with little to write home about. Still, the next 45 minutes could be different so stick around.

45+1' Bürki makes another low save to keep out Fossum's low drive. A comfortable save though. Still, Bürki has had another good half. Confident performance. Reus and Delaney are down after clattering into one another in their attempt to tackle Asano. Ouch. Concussion protocol anyone? Not sure there will be one.

43' Bazee, who was on the end of a few tough tackles, can't continue. Asano comes on for him.

40' SAVE! Great football all round right there ladies and gentlemen. Piszczek thinks fast and hammers an arrow of a free kick from near the touchline across field, perfectly into the path of Guerreiro in the box. He hits it first time, but Esser pulls off a top save. Just great football, and one of the best moments of the half (not saying much, sadly).

38' Back and forth we go, but not at great speed or with incredible excitement. Witsel slices an effort wide, Hannover misplace a final ball. It still is, even as halftime approaches, a very sloppy game. Perhaps it's the wet pitch? Whatever it is, it's slow.

33' Bazee wants a penalty, but I think it would be harsh. Diallo is being physical, but not to the point where it's a foul. Delaney's tackle on Bazee after the ball had gone however... Hannover trying to find their feet.

28' CHANCE! Goalmouth scramble but Hannover fluff their lines in the way a side in poor form and near the foot of the table does. Should do better there. 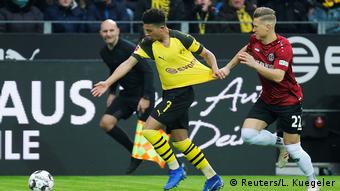 25' GOAL! 1-0 Dortmund (Hakimi) This time. Hakimi plays a one-two with Guerreiro, who is in the box and back towards goal, and when the ball comes back to the defender he hammers in a shot that curls away from Esser. A lovely move, the third in the last five minutes, but an even better finish.

23' POST! An incredible pass by Piszczek splits the Hannover defense and gives Reus even more space. This time he keeps it down, but it hits the post. So close!

21' CHANCE! Sancho gets a chance at shot on the edge of the area but blazes over. Then seconds later, Hannover gift the ball away, Götze nips in and then slips in Reus who should poke home but instead pokes well over. Waste, especially given that it fell to the man you'd back to score.

18' Witsel fouled by Weydandt as he bursts through, but the free kick flies harmlessly past the far post.

15' The game has calmed a bit, but the sloppy, lack of a final ball part has remained. A slow burner, this one. A bit like the opening overs of a test match. Batsman is taking the singles and the bowler isn't really testing him. Waiting for either a mistake or some inspiration.

9' Dortmund waste a free kick, try to reset but Weydandt fouls Hakimi, Müller picks up the loose ball and then Hakimi clips down Müller. The attack is stopped, but Hakimi doesn't escape a yellow card. All a bit sloppy.

5' Sancho is sensible with the ball out wide, the cross comes in from Piszczek but Delaney's header is easy for Esser. A bit of a manic start, but Dortmund look like they're grabbing control now.

2' SAVE! Weydandt gets to a cross and the header looks like it's creeping in, but Roman Bürki makes a strong save with his wrist. Anton then blazes over from the corner despite being unmarked. Bürki picking up where he left off in Leipzig, but Dortmund a little slow to start here.

1' Hannover get us underway!

- It's a bit wet and grey out there in Germany today, but that hasn't stopped thousands of fans attending games. Dortmund's stadium seems never to be empty, and this Saturday looks like it won't be an exception.

- TEAMS! Dortmund welcome back Marco Reus, with Mario Götze keeping his spot at the front of the attack. Julian Weigl is still in the heart of the defense in a team that otherwise is looking familiar. Hannover opt for Hendrik Weydandt in attack to cause some trouble, and hope Esser isn't as busy as last week.

- Good afternoon! Dortmund got a solid win over RB Leipzig to start the season,  and did it without Marco Reus. Hannover didn't fare as well, losing 1-0 to Werder Bremen despite goalkeeper Michael Esser made 14 saves (equaling a league record). With the club second last and with just 11 points, Andre Breitenreiter is fighting for his job. A visit to Dortmund hasn't come at the best time.