Peter Bosz shows no signs of learning from past mistakes

Dutch coach Peter Bosz was back in the dugout for his first Bundesliga game after departing Dortmund in 2017. As his Leverkusen side lost against Gladbach, it was hard not to feel a worrying sense of deja vu. 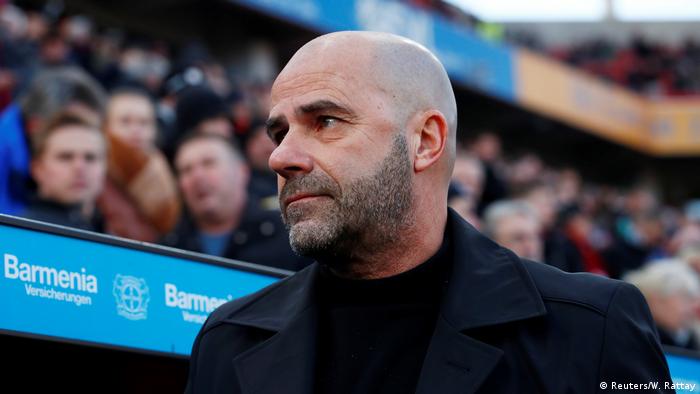 Welcome home, Peter Bosz. It was as if you'd never left.

The Dutchman was back in a Bundesliga dugout just 13 months after his last game in charge at Borussia Dortmund — only 80 kilometers (50 miles) north of Leverkusen but worlds away in terms of expectation - and continued right where he left off, with a tactical approach so attacking it was bordering on criminal.

Anyone who remembers Bosz's time in the Ruhr Valley with even a shred of clarity will tell you that attacking was certainly not the issue. In fact, his team was so geared towards trying to score, they forgot how to perform the most basic defensive duties. Leverkusen fans in attendance on Saturday will have been concerned by the familiarity between that team and this.

Leverkusen managed 22 shots, hit the target ten times, and enjoyed 64 percent possession. All very respectable until you read the scoreline: 1-0 Gladbach. The nature of the goal is what fans will find most concerning, arriving during a spell of dominance for Leverkusen in the first half.

Against the run of play, Gladbach captain Lars Stindl received the ball with acres of space in the Leverkusen half and picked out Jonas Hofmann on the overlap. The German fed Alassane Plea and the Frenchman lashed a shot into the far corner from just inside the box. It couldn't have been simpler.

Alarm bells will have been ringing the moment fans read the team sheet. In an attempt to answer the question of which of his attacking talents he should fit into his lineup, Bosz decided his best bet was simply to select all of them. Leon Bailey, back in following a period spent in the wilderness during the latter days of Heiko Herrlich's reign, joined a starting eleven already containing Kevin Volland, Kai Havertz, Karim Bellarabi and Julian Brandt.

Newly arrived coaches should be applauded for throwing caution to the wind, but that doesn't appear to be Bosz's way. The Dutchman's plan A, B and C were all deployed at once; the kitchen sink thrown on from the opening whistle.

And it looks long to continue too given Bosz said afterwards: "I learned from my failures at Dortmund. But if this team correctly learns my way of playing, we'll be even more attacking than during my time at Dortmund."

The early signs are that such an approach might be a tad ambitious, but there were some positives. Leverkusen's young guns — Bailey, Havertz and Brandt — dovetailed beautifully at times. The straightjacket days of the Herrlich era have evidently been thrown off, a change perhaps best exemplified by a wonderful moment of skill from Brandt in the first half as he teed up Havertz with a sort of backheel, scissor-kick. There will be many more moments like this to enjoy under Bosz, one imagines.

Factor in a strong penalty claim that was waved away, a second-half strike from Bellarabi that struck the post and an excellent performance from Yann Sommer in the opposition goal, and it could be easy to argue Bosz was merely unlucky in his first match.

Whatever the case, one thing's for certain: Bosz will make his way home this evening with that same old feeling in the pit of his stomach. One of defiance, as he looks ahead to a new challenge next weekend, but one tinged with a familiar frustration.

Unless he realizes there is more than one way to approach a game, it's a feeling he won't shake any time soon.

Borussia Dortmund have fired Peter Bosz after 167 days in charge at Signal Iduna Park. The club have swiftly replaced Bosz with Peter Stöger, who was fired as Cologne coach last week. (10.12.2017)