Many killed in Kabul funeral blasts

At least 18 people have been killed in explosions that hit the funeral of a protester in Kabul. It's the second bombing in days after a massive suicide attack in the capital's diplomatic area killed over 90 people. 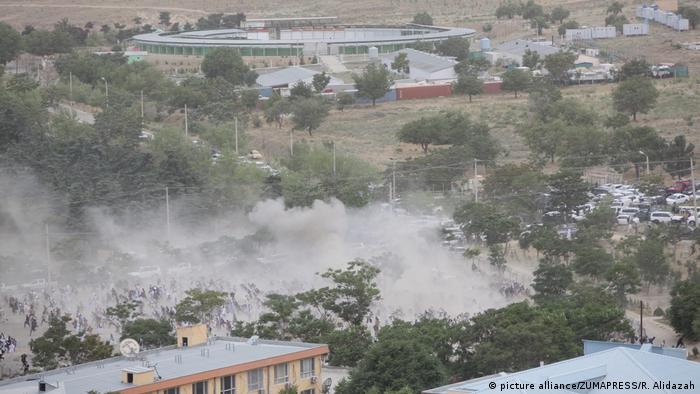 Three back-to-back explosions rocked the Afghan capital, Kabul, on Saturday, killing at least 18 people, according to local media with reports that the death toll would likely rise as rescuers work their way through the rubble.

"Many people have been killed and wounded at the funeral of Salim Ezadyar," the son of a prominent Afghan politician, witness Abdul Wudood told the AFP news agency.

Ezadyar was killed Friday during violent clashes between police and angry protesters demanding President Ashraf Ghani's resignation over his government's failure to provide security in the wake of Wednesday's massive bombing that killed more than 90 people and injured hundreds in Kabul's heavily guarded diplomatic area.

"A number of Afghan officials, including Chief Executive Abdullah Abdullah and Foreign Minister Salahuddin Rabbani, were present at Ezadyar's funeral. Both of them are unhurt," Saif told DW.

A police official told the DPA news agency that it was unclear if the explosions were suicide bombings or previously placed explosives.

On Saturday, the Afghan capital was in a state of lockdown as military vehicles patrolled the city in an attempt to prevent a repeat of Friday's protest.

Afghan officials had warned people protesting Wednesday's diplomatic area bombing to avoid public assembly due to the threat of a terrorist assault.

"We have intelligence reports that our enemies are trying again to carry out attacks on gatherings and demonstrations," said Kabul garrison commander Gul Nabi Ahmadzai. "We hope that people will stay away from protests."

More than 1,000 demonstrators took to the streets in Kabul on Thursday and Friday, many carrying pictures of bomb victims and chanting slogans against the leaders of the national unity government, President Ghani and Chief Executive Abdullah Abdullah. Protesters demanded answers from the government over the perceived intelligence failure leading to the attack.

As a demonstration in the city turned violent, police fired into the crowd, killing at least three protesters, according to local media reports.

"Any government attempt to disrupt our fair and just demonstration will show their complicity with terrorist groups and the perpetrators of Wednesday's attack," said Asif Ashna, a spokesman for the protesters.

No militant group claimed responsibility for the Wednesday attack, but the Taliban and the self-styled "Islamic State" (IS) militant groups have staged large-scale assaults in Kabul in the past.

- Afghanistan: sent back to a war zone

- Opinion: Observe and reflect on Afghanistan

After initial investigations, Afghan authorities said the Pakistan-based militant Haqqani network carried out the attack, and that the Pakistani military's Inter-Services Intelligence (ISI) security agency was also responsible. A source close to the Afghan presidential palace said Ghani had signed an order to execute 11 imprisoned Haqqani network and Taliban convicts following the attack.

Rahmatullah Nabil, the former chief of Afghanistan's National Directorate of Security intelligence agency, alleged that Pakistan has been "playing a deadly game in Afghanistan."

"Pakistan wants to find new support for its proxy jihadists. It also wants to convey a message to the US that without Pakistan's help, Washington is going to fail in Afghanistan," Nabil told DW.

Pakistan on Thursday dismissed the allegations that its intelligence agencies were behind Wednesday's truck attack. "We reject the baseless allegations. The accusatory approach is unhelpful towards efforts for peace," Foreign Office spokesperson Nafees Zakria said at a weekly news briefing in Islamabad.