Majority of South Koreans favor North Korea ′friendship′ | Asia | An in-depth look at news from across the continent | DW | 19.02.2018

More than 60 percent of South Koreans believe President Moon should sit down with Kim Jong Un at a summit designed to improve bilateral relations and ease the military tensions that have dogged the region for many years. 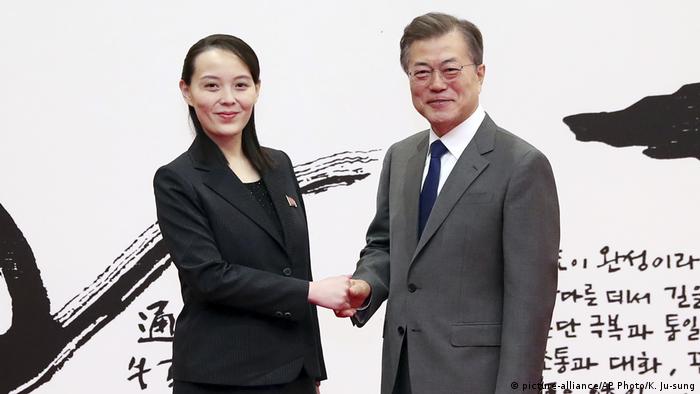 A poll conducted on February 15 showed that 61.5 percent of South Korean adults nationwide were in favor of Moon travelling to Pyongyang for face-to-face talks with Kim, while 31.2 percent disagreed and expressed the belief that additional pressure – such as international sanctions – is the best way to force North Korea to moderate its behavior.

The poll was conducted half-way through the Winter Olympic Games, which are being held in the South Korean city of Pyeongchang, and the results underline the surge in friendly feelings that ordinary South Koreans have felt towards their neighbors on the other side of the Demilitarized Zone.

And that is a direct result of a combination of sense of fear and feeling of hope among many in the South.

The fear for them is that US President Donald Trump intends to carry out a "bloody nose" military strike against targets in the North in an attempt to demonstrate Washington's capabilities and its willingness to use force. And the other element of the equation is hope that North Korea is genuinely interested in building a more collaborative relationship with the South and that peace is finally possible, 65 years after the end of the Korean War.

"Those numbers in this poll, and others, come as no surprise to me at all," said Ahn Yin-hay, a professor of international relations at Korea University in Seoul.

"There have been lots of reports of Washington planning a 'bloody nose' attack on a missile site or a nuclear facility in the North, and that makes people very worried because Pyongyang can be expected to retaliate and it is likely to target South Korea," she told DW.

"South Koreans believe that a strategy of talking to the North is better than a violent approach that threatens our safety," she said. "Talking has a far better likelihood of achieving peace and stability on the Korean Peninsula."

Moon is widely seen as having worked extremely hard since he took over the government in Seoul in May last year to build bridges with the North. Those approaches – including offers of talks to reduce the military threat levels, a front-line military hotline and reunions for families separated since the end of the Korean War in 1953 – were initially ignored or rebuffed by Pyongyang.

The gradual ratcheting up of international sanctions in the closing months of 2017, however, appear to have convinced Kim Jong Un to be more amenable to discussions, while the timing and location of the Winter Olympic Games have provided the perfect opportunity for détente to flourish.

Yet Moon is clearly in a difficult position. He may want to push ahead with a summit that may turn out to be a turning point in the bilateral relationship. It may, however, equally be a ploy by the North Korean regime to drive a wedge between Seoul and its most important security partner, Washington, as part of Pyongyang's broader long-term aim of a united Korean Peninsula controlled by the government that presently occupies the North.

Moon must be careful not to alienate the US – and its present unpredictable leader – as he still needs Washington's security guarantees.

Underlining the tightrope that he is walking, Moon said on Saturday that a decision on a summit with Kim is too early.

"There are many expectations, but I believe they might be a little too anxious," Moon told reporters when asked about the possibility of a summit. He reiterated that there needs to be progress on the question of North Korea getting rid of its nuclear weapons before real progress can be made.

There are, however, a number of areas in which progress can take place and would arguably serve as confidence-building measures for the two sides, believes Ahn. These include discussions between military leaders at the border on easing tensions and reunions of families divided by the DMZ.

"If progress can be made in these areas, then I am optimistic that we could see a summit in the late summer months," she said, suggesting a meeting that would coincide with the anniversary of the June 2000 summit between Kim Jong Il and Kim Dae-jung, the then South Korean leader. Another symbolic date that could appeal to both sides might be August 15, the Liberation Day national holiday marking the end of Imperial Japan's colonial rule over the peninsula.

Yet others are less positive about the outlook on the peninsula.

"Of course South Koreans are saying they want the summit to happen; they do not want a war and the North Korean 'charm offensive' during the Olympics has been a huge success," said Jun Okumura, a political analyst at the Meiji Institute for Global Affairs.

"But Moon is in a very difficult position, stuck between the US, North Korea and even China as a major player in this situation," he said.

"I do not see how Moon can square the South's relationship with the US with this meeting," he said. "And I believe that the issue of the joint US-South Korean military exercises could be the flash point."

At the request of Pyongyang, the US and South Korea agreed to postpone military annual exercises that were due to be held during the Winter Olympics. North Korea is now demanding that the maneuvers be cancelled entirely, warning that failure to do so would reverse all the positive developments in the bilateral relationship of recent weeks.

Moon has a choice; one option is to bow to the North Korean demand and risk alienating the US entirely – and possibly encouraging Washington to take a unilateral approach to dealing with North Korea, which could involve the much-feared "bloody nose" approach. Alternatively, he can reschedule the exercises and face the wrath of Pyongyang.

"I would say that everything hinges on these exercises and the situation is extremely dangerous at the moment," Okumura said. "A decision must be made in the next few weeks and, whatever that decision is, the ramifications will be felt this spring."