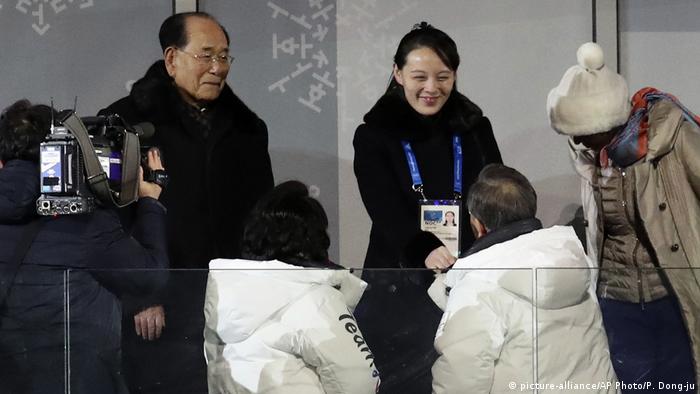 The athlete delegations of North and South Korea marched together on Friday, under one flag, in the opening ceremony of the 2018 Winter Olympics. During the event, South Korea's president, Moon Jae-in, and his wife, Kim Jung-sook, shook hands with Kim Jong Un's sister, Kim Yo Jong, who traveled south to witness the ceremony and meet with officials in a gesture of peace between the two countries.

Kim Yo Jong is the only member of North Korea's ruling family to have visited South Korea since the 1950-53 Korean War. She and the athletes are the most prominent North Koreans to cross the border. 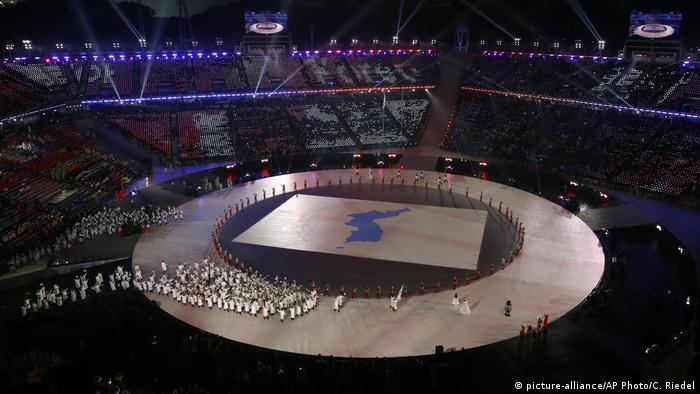 Diplomacy at the games

The historic handshake topped off a day of diplomacy between the two Koreas. Kim Yo Jong was accompanied on her trip by Kim Yong Nam, North Korea's parliamentary head and ceremonial head of state. Both were greeted at the airport by South Korea's Unification Minister Cho Myoung-gyon.

For security reasons, few details of Kim Yo Jong's three-day itinerary have been made public, but it is expected that she and Kim Yong Nam will meet with Moon on Saturday for lunch.

The high-profile visit and the North Korean athletic delegation are part of a recent diplomatic push, spearheaded by the North, to ease tensions and bolster unity between the two nations.

Guterres "reiterated his expectation and hope that all parties will use dialogue to achieve the peaceful denuclearization of the peninsula," the spokesman added.

Prior to the opening ceremony, Kim Yong Nam attended a dinner for visiting foreign dignitaries hosted by Moon, where US Vice President Mike Pence was in attendance.

Read more: North Korea has 'no intention' to meet US officials during Olympics

Pence reportedly did not shake hands with Kim Yong Nam and left the event after only a few minutes. Later, the vice president watched the opening ceremony in the same VIP section as the Kims and remained seated while the unified Korean delegation marched.

Relations between the US and North Korea were marked by months-long tensions in 2017 over Pyongyang's ballistic missile tests, advancements in its nuclear program and heated rhetoric between Kim Jong Un and US President Donald Trump.

At a glittering ceremony, the South and North Korean athlete delegations entered the stadium behind the blue-and-white Korean unification flag and brought the crowd to its feet. The Moons, Nam and Kim all stood and shared another handshake as athletes marched in the stadium in Pyongchang. 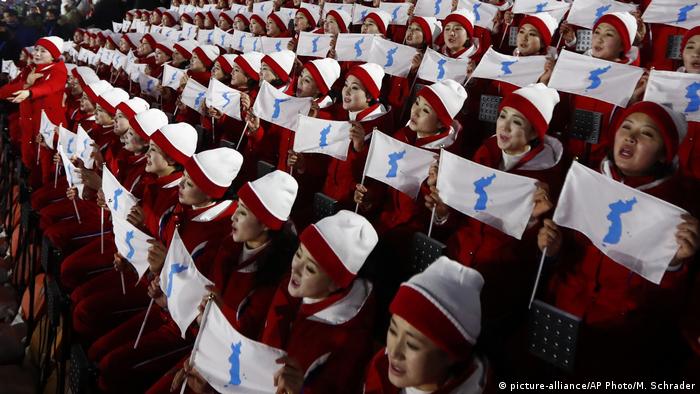 South and North Korea had last marched together at the 2006 Winter Olympics in Turin. They also made the symbolic gesture at the opening of the 2000 and 2004 Olympics in Sydney and Athens.

Pyongyang has sent 22 athletes and hundreds of cheerleaders, performers and taekwondo demonstrators to attend the Pyeongchang Olympics. The Games will conclude on February 25.