In Seoul, Germany′s Steinmeier warns Koreas that reunification needed luck, and hard work | Asia | An in-depth look at news from across the continent | DW | 09.02.2018

In South Korea, Germany's president is seen as a symbol that reunification remains a possibility even in bleak times. Michaela Küfner reports from Seoul that Frank-Walter Steinmeier is trying to keep such hopes in check. 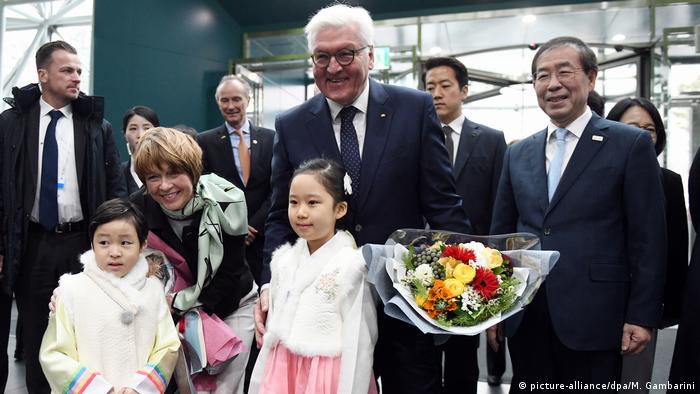 The delay only lasted a few moments, but symbolism counts for a lot, especially in Asia. When Germany's President Frank-Walter Steinmeier was about to head to his limousine in Tokyo on his pre-Olympic visit, his motorcade to the airport was briefly delayed because of security arrangements for US Vice President Mike Pence. It appears even presidential motorcades can outrank each other.

Both Pence and Steinmeier are guests at the opening of the Olympic Games, and they've become symbols for two sides of the debate on how to approach North Korea. South Koreans see Pence as the manifestation of Washington's military might in the region. Germany's President Steinmeier, whose role is largely ceremonial, has been treated more as living proof that reunification of a divided people can become a reality, even against the odds.

A symbol of sanctions and a symbol of reunification

Pence's tough rhetoric over the past days put diplomatic pressure on North Korea, and also the South to some extent. He warned that the world "must not be fooled by North Korea's 'smile diplomacy'" and announced that the US would soon impose "the toughest and most aggressive round of economic sanctions on North Korea ever." In the face of North Korea's nuclear threat, South Korea's President Moon Jae-in is visibly torn between following the US line of maximum pressure and his hope that the surprise visit from the North could be more than just an Olympic publicity stunt from its leader, Kim Jong Un.

When Steinmeier met his counterpart Moon, less than 24 hours before the sister of North Korean dictator Kim Jong Un arrived, he presented him with a special portrait. It shows Willy Brandt, the late German chancellor seen as having laid the groundwork for German reunification. It was Brandt's "Ostpolitik" of defusing tension with the Soviet Union that is credited with making real dialogue between East and West Germany possible in the first place. Moon sighed when he saw the painting, saying he would "like to live that Ostpolitik himself — but it is difficult." Steinmeier's choice of gift may have struck a chord, but the president himself has been keen to stress how difficult and how fortunate the sudden German reunification process was, calling it a "gift from history."

An aide to the South Korean president later said he had never seen him so enthused by a meeting. Steinmeier must have offered Moon what he finds in short supply these days: compassion for his political catch 22 as he is torn between the policy expectations of key allies like the US and Japan to keep up the pressure on the North and the hope that the North is not just playing with the South's desire for an easing of tensions.

"Have the courage to keep that hope," Steinmeier said on the prospect of reunification at a debate with former Defense Minister Kim Tae-yong and others. But he warned against piling too many expectations on any potential dialogue with North Korea, and against viewing the fall of the Berlin Wall with rose-tinted glasses. The narrative of all sides pulling together to achieve independence was a "beautifully written story," Steinmeier said, but in reality, Willy Brandt's Ostpolitik ran the risk of "tearing apart" West Germany's political institutions of the time.

He also cautioned that the North Korean nuclear threat could not be solved in bilateral Korean talks. As a former foreign minister, Steinmeier likes to cite his experience of negotiating the nuclear deal with Iran. That process, he stressed, was successful in the end only because all the affected powers had a place at the table. Unless the US, China, Russia and Japan join the Koreas in fresh talks — a format that has failed to defuse the crisis before — he sees no chance of a resolution.

Steinmeier recommended a focus on humanitarian issues in any bilateral talks, saying that continued pressure on the regime and a parallel offer of dialogue are no contradiction. A concept South Korea's president is clearly struggling with as he faces another, more domestic challenge. After almost three generations of division, support for reunification is sinking among younger South Koreans. The younger they are, the less keen Koreans are to break the deadlock and share their wealth with their fellow Koreans in the North — an inevitable requirement for any step in the direction of reunification. For now, it is in the vital interest of South Korea to serve the expectations and the rhetoric of its allies. Yet the hope remains here in Seoul that the "Olympic Truce" may open a new door to the North, and Steinmeier's presence only reinforces that.

South Korea had requested the exemption for the member of the North's delegation to Pyeongchang on Wednesday. The UN also decided delegation members would be allowed to buy luxury goods while in South Korea. (09.02.2018)