A large majority of Germans do not blame Chancellor Angela Merkel's refugee policy for two attacks last month carried out by asylum seekers, according to a poll. Both attacks were claimed by "Islamic State." 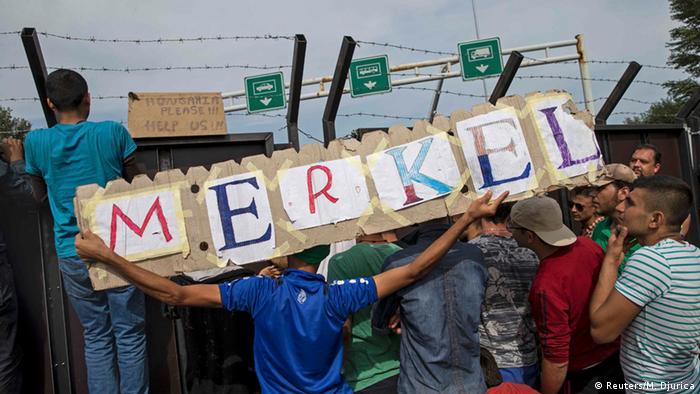 The Berlin-based pollster Forsa found that 69 percent of respondents do not believe there is a link between the two attacks claimed by "IS" in the southern state of Bavaria last month and the nearly one million refugees who entered the country last year.

On July 24, a Syrian refugee who had been denied asylum and was awaiting deportation to Bulgaria blew himself up outside a festival in Ansbach, killing only himself.

Six days earlier, a 17-year-old believed to be from either Afghanistan or Pakistan wielded an ax on a train in Würzberg, wounding five people before being shot dead by police. Investigators said the two attacks were tied to IS.

The poll found only 28 percent of Germans blame Merkel's refugee policy for the attacks. Of those, 78 percent were supporters of the anti-immigration Alternative for Germany (AfD) party, which has seen its nationwide support rise to about 12 percent on the heels of rising German angst over immigration.

Germany has taken in more than one million refugees since last year's migrant crisis, mostly from Iraq, Syria and Afghanistan. Authorities across Europe have warned that some IS sympathisizers have snuck onto the continent along with refugees.

In another recent poll, 66 percent of German's said they disagreed with Merkel's widely used "We can do it" mantra - the belief that Germany can accept and take care of so many refugees.

Germany was shaken by two other attacks unrelated to Islamist militants in July that raised concern over security.

A 19-year-old German-Iranian went on a shooting rampage that killed nine people in Munich. Investigators said the gunman, who committed suicide, was deranged.

In another attack, a Syrian man stabbed to death a woman in the state of Baden-Württemberg. Police said the attack was over a personal matter.

The government has responded to terrorism concerns with an array of new security proposals and measures.

The survey results were based on the responses of 1,007 people between July 28-29. The margin of error was plus or minus three percentage points.