Emmanuel Macron's supporters appeared confident after his victory in the first round of the French presidential elections. But his opponent, far-right Marine Le Pen, is trailing less than 1 million votes behind him. 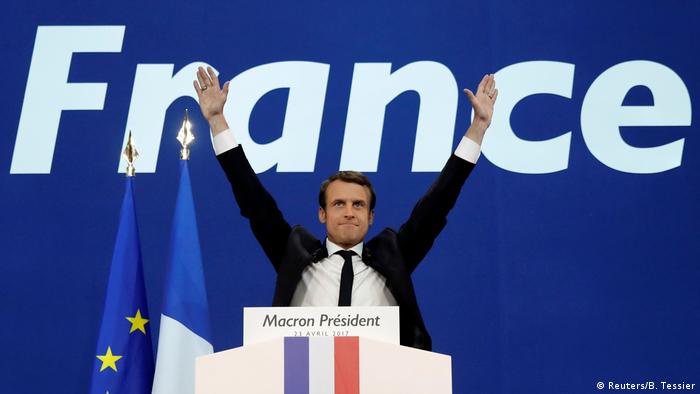 The final results from the first round of France's presidential election's showed that centrist candidate Emmanuel Macron got almost 1 million more votes than far-right leader Marine Le Pen. Both candidates will now be advancing to a runoff scheduled on May 7.

The 39-year-old candidate is the projected winner in most polls, as initial opinion polls show Le Pen to be 24 to 28 percentage points behind Macron. The Elabe poll says that 64 percent of voters will favor Emmanuel Macron on May 7, while a projection by Ifop Fiducial gave Macron 60 percent of the share.

Narrow but solid win for Macron

Emmanuel Macron collected 24.01 percent in Sunday's first round of elections, while Le Pen garnered or 21.30 percent of the vote, according to the official final count published by the French Interior Ministry.

Conservative candidate Francois Fillon got 20.01 percent, while left-wing candidate Jean-Luc Melenchon received 19.58 percent of the vote. Seven other candidates were left far behind.

The turnout at the polls was 77.77 percent - the lowest in a French presidential election for 15 years.

Le Pen distances herself from her party

Sunday's vote was the best result ever achieved by the anti-EU and anti-immigration Front National (FN) party, headed by Marine Le Pen. In preparation for the May 7 runoff, Le Pen announced that she would be temporarily stepping down as head of the movement.

"Tonight, I am no longer the president of the National Front. I am the presidential candidate," she said on French public television and also in a tweet.

The move appears to be intended to attract a wider range of voters at the runoff elections who may not necessarily identify with the FN but may feel attracted to some of Le Pen's populist rhetoric. Le Pen has said in the past that she is not a candidate of her party, and that the views she was advocating were her own.

Meanwhile Emmanuel Macron, the independent centrist candidate who came in first in Sunday's first round or elections, attracted supported from many of his erstwhile rivals. Incumbent French President Francois Hollande urged voters to choose Emmanuel Macron in the presidential runoff to keep far-right leader Marine Le Pen out. He said on Twitter that he would be casting his vote for the independent candidate.

Macron was Hollande's top economic adviser between 2012 and 2014, serving as economy minister in his Socialist government thereafter.

Former French conservative candidate Francois Fillon meanwhile announced that he would vote for Macron in the May 7 runoff to try to prevent Le Pen from winning the race. Fillon had been eliminated from the presidential race finishing third on Sunday, behind Macron and Le Pen. Fillon added that he won't lead his party into June's parliamentary election in France, saying he had lost his legitimacy as party leader.

Growing support for Macron across EU

The president of the European Parliament has joined calls by various EU leaders who endorsed Macron in the presidential race. Antonio Tajani said he believed far-right candidate Marine Le Pen would lose on May 7, and called on the French public to defend the values of the European Union.

The EU's top diplomat, Federica Mogherini, wrote on Twitter that to "see the flags of France and the EU welcome the result of Emmanuel Macron is the hope and future of our generation."

A number of German lawmakers had earlier commented on Emmanuel Macron's victory at the first stage of the French elections.

Germany's Foreign Minister Sigmar Gabriel welcomed Macron's win, and voiced confidence that he would succeed his former party leader, Francois Hollande, as the next president of France, saying that he had the "strongest showing of all candidates."

"In France, this is about France, of course. But it's also about Europe and I'm particularly pleased that Macron won in this round because he was the only truly pro-European candidate," Gabriel commented.

Chancellor Angela Merkel's spokesman, Steffen Seibert, wrote on Twitter: "Good that Emmauel Macron has been successful with his firm course for a strong EU and a social market economy."

Macron's win in the first round of elections also gave a major boost to financial markets across Europe. Germany's DAX share index hit a record as investors were confident about the outlook of the elections and relieved about the initial outcome. The Paris CAC 40 index meanwhile shot up 4.1 percent. London's FTSE 100 also made gains of 1.4 percent, while Madrid's IBEX 35 index rose by 3.5 percent.

Only Russia appeared to side with Marine Le Pen, saying that she might provide "hope for change" in Moscow's view, while Macron is viewed as the least favorable candidate for the Kremlin.