France's centrist Emmanuel Macron and far-right leader Marine Le Pen will go on to the run-off vote in two weeks time, according to preliminary official results from the first round. DW brings you the latest. 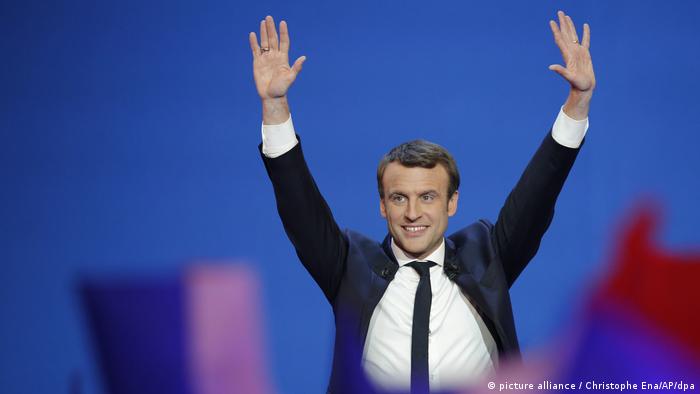 23.18 We're wrapping up coverage on this stream now. Click here for an overview of the French presidential election.

22.00 Partial official results of the first round were announced at midnight local time in France showing Macron and Le Pen going through to the run-off vote for the presidency on May 7. With 89.7 percent of ballots counted Macron won 23.9 percent to 21.7 percent for Le Pen who set a new record for her FN party by attracting more than 6.9 million votes.

The results are in line with polling agency projections which showed Macron and Le Pen going on to the second round.

21.57 EU chief diplomat Federica Mogherini greeted the result in France with a message via Twitter, saying "See the flags of France and the EU greeting the result of Emmanuel Macron, it is the hope and the future of our generation."

Francois Fillon trails them with 19.8 percent and Jean-Luc Melenchon 18.8 percent. The last votes to come are from France's biggest cities, which ten to vote for candidates on the left. Polling agencies are projecting a slightly higher score for Macron.

20:55 Chancellor Angela Merkel's spokesman Steffen Seibert wrote on Twitter "Good, that Emmanuel Macron with his course for a strong EU and a social market economy has had success. All the best for the next two weeks."

20:50 European Commission President Jean-Claude Juncker has congratulated Emmanuel Macron and wished him well for the May 7 run-off vote, according to his spokesman Margaritis Schinas.

20:18 Emmanuel Macron was greeted by his supporters shouting "Macron President." He said "our country is going through an unprecedented period." "Our answer was brilliant, to go and vote massively. To take me on to the second round of elections." He told his supporters they had changed the course of history. He said he would take to the second round hopes and optimism for France and for Europe. He said he would act for all citizens and patriots in the face of the nationalist challenge of Marine Le Pen.

Macron said the challenge was to remedy a political system which had been unable to solve problems in the past 30 years and create a new political landscape for France and Europe. He wanted to build a majority government which would renew political life and allow each and every citizen to be part of a new society within Europe. He said the task ahead was immense but that he believed he and his supporters were capable of achieving it.

19:49 Former European Parliament President Martin Schulz, who is standing as chancellor candidate for Germany's Social Democrats in the federal elections slated for September, welcomed centrist Emmanuel Macron's victory in the first round of the French presidential election.

"All the democrats in France must now unite, so that he and no nationalist will become president," Schulz said in a tweet.

19:43 After counting 34 percent of the vote, France's interior minister said far-right leader Marine Le Pen is leading with 24.6 percent, while centrist Emmanuel Macron trailed in second with 21.9 percent. However, the partial results do not include France's biggest cities, the ministry said.

19:37 At centrist Emmanuel Macron's election-day headquarters in Paris, one of his supporters told DW that the banker-turned-politician is "the only one who is pro-Europe, the only one who is for a strong relationship with Germany."

19:28 Outgoing French President Francois Hollande congratulated his former economy minister Emmanuel Macron for making it to the second round of the presidential election.

Amid historically-low approval ratings and a series of terrorist attacks on his watch, Hollande dropped out of the presidential race early. Corinne Narassiguin, speaker of Hollande's French Socialists, discussed the collapse of her party in the polls and Hollande's legacy.

Click here to read more: 'After Hollande, the end of the Socialist Party of France?'

19:24 Leftist candidate Jean-Luc Melenchon said he does not recognize the preliminary results, saying the official tally is not yet known. He urged political commentators to be prudent before official results are published by the electoral commission.

19:10 Far-right leader Marine Le Pen has thanked France's "sincere patriots" for securing her electoral success in the first round of the presidential election. She doubled down on her populist policies, promising to combat unmitigated migration and terrorism.

Le Pen said the election was about confronting "savage globalization," speaking to her supporters at her election-day headquarters. "It is time to free the French people of arrogant elites who want to impose their conduct," Le Pen said.

Earlier, Femen activists dressed as Le Pen and US President Donald Trump, staged a protest action in the far-right leader's town of Henin-Beaumont in northern France.

19:00 Marion Le Pen, niece of far-right leader Marine Le Pen, has described the vote as a "beautiful victory for the patriots."

18:45 Embattled conservative candidate Francois Fillon conceded defeat, backing banker-turned-politician Emmanuel Macron. "There is no other choice but to vote against the National Front," Fillon said. "France is in your hands now."

18:39 The leader of Germany's Green Party, Cem Özdemir, congratulated Macron on Twitter and said "thank you" to French voters.

"A clear choice: all of the left, all of the republicans have to mobilize their votes for Emmanuel Macron, for France, for the republic, for Europe," Ayrault said in a tweet.

18:16 Other presidential candidates have started to react to the preliminary results of the first-round. Socialist candidate Benoit Hamon has conceded, putting his weight behind centrist candidate Emmanuel Macron in the second round.

Socialist Prime Minister Bernard Cazeneuve has called on all French citizens to cast their vote for Macron in the second round, saying it is the only way to "beat the National Front and block its baneful plan to bring France backwards and divide the French."

Conservative candidate Francois Fillon, who attempted to push through a scandal-ridden campaign, has suffered a "huge disappointment," according to a campaign spokesman.

18:13 Far-right National Front Vice President Florian Philippot the party is "happy" that the party's candidate Marine Le Pen has tentatively qualified for the second round of the presidential election.

"We have succeeded in establish our idea of patriotism," Philippot said in a tweet. At election-day headquarters, supporters have celebrated Le Pen's success at the polls. 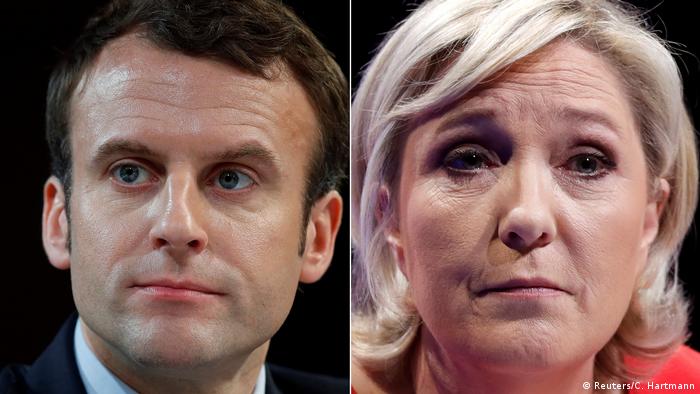 17:00 Polling stations closed across France, save for those in a few select cities. Pollsters have roughly an hour to crunch numbers before releasing preliminary results, which are based on real vote counts from approximately 500 of the 60,000 polling stations across the country.

"French media is banned from publishing this data (until after the vote) for a good reason, so that they do not influence the vote," said DW's EU correspondent Georg Matthes, who is on the ground at far-right leader Marine Le Pen's post-election party.

16:57 French prosecutors charged two men suspected of plotting an "imminent" attack ahead of France's presidential elections. France has witnessed a series of terrorist attacks across the country over the past two years. The two suspects were arrested on Tuesday in Marseille.

16:49 From a veteran leftist to a far-right populist, the 11 candidates vying for the French presidency span the political spectrum. But where do they stand on key topics that impact Europe's future? DW shows you where the top four candidates stand on the most relevant subjects.

16:12 Running on a platform of wealth redistribution, French presidential candidate Jean-Luc Melenchon has polled in first place among young voters ahead of Sunday's election. A pro-Melenchon video game attests to how deep the fandom goes.

15:38 Far-right populist Marine Le Pen cast her vote in Henin-Beaumont. She is awaiting the historic election result in this "forgotten" small town, rather than in Paris.

"Le Pen, who has led the National Front since 2011, grew up in the area. That is why she shunned Paris, where the despised 'elites' live, and decided to cast her vote in front of the cameras of international media outlets here," said DW's Bernd Riegert, reporting from Henin-Beaumont.

14:58 Thousands of demonstrators rallied in the German capital Berlin in support of a united Europe during France's presidential election. The participants waved EU flags and held signs that read: "Berlin loves France." Far-right leader Marine Le Pen has vowed to pull France out of the EU if she wins the election.

14:38 After a campaign full of surprises, France has begun voting in what is expected to be a tightly-contested presidential election. DW has rounded up the best content to keep you informed.

Click here to read: 'What you need to know about the French presidential election'

14:27 Femen activists, including one wearing a mask of Marine Le Pen, have been detained in the far-right leader's base town of Henin-Beaumont in northern France for a rowdy protest action against her populist policies. 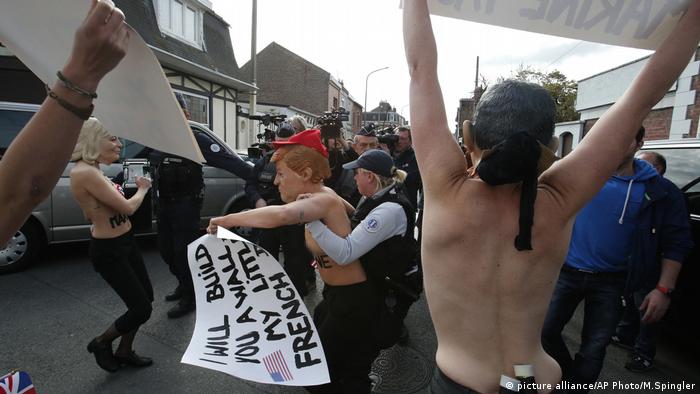 14:24 Far-right leader Marine Le Pen's campaign posters have failed to make it to polling stations outside of France. The foreign ministry said "only 10" of the 11 candidates submitted posters before the electoral commission's deadline of April 10.

"The posters for the candidate Marine Le Pen were not provided so the corresponding poster board is empty" at foreign polling stations, the ministry said.

14:14 US President Donald Trump, seen as a tacit supporter of far-right leader Marine Le Pen, took to his preferred social media platform to comment on the French elections. "Very interesting election currently taking place in France," he wrote on Twitter.

14:05 Even at the polls, many French voters have decided on their preferred candidate at the last minute. DW's Erin Conroy speaks with a young man who changed his mind while casting his ballot.

13:59 The French government has heightened security at polling stations across the country, deploying 50,000 law enforcement agents to secure the presidential election.

13:45 Outgoing French President Francois Hollande urged voters to turn out for the elections, saying it is necessary "to show democracy is stronger than anything."

The French interior ministry said turnout was high by midday, with 28.54 percent of eligible voters having cast their ballot.

This time around though, four candidates could potentially reach the decisive run-off vote on May 7. The gaps between their projected tallies are so small that they lie within the margin of error. That's unheard of and hasn't occurred since the beginning of France's Fifth Republic in 1958.

13:25 Eleven candidates are vying for the French presidency. But who are they? DW takes a look at who's who in the highly-contested first round of the election.