France has avoided a runoff between the extreme right and the extreme left by sending Emmanuel Macron to the second round. But the populist danger is still very real, writes Max Hofmann in Paris. 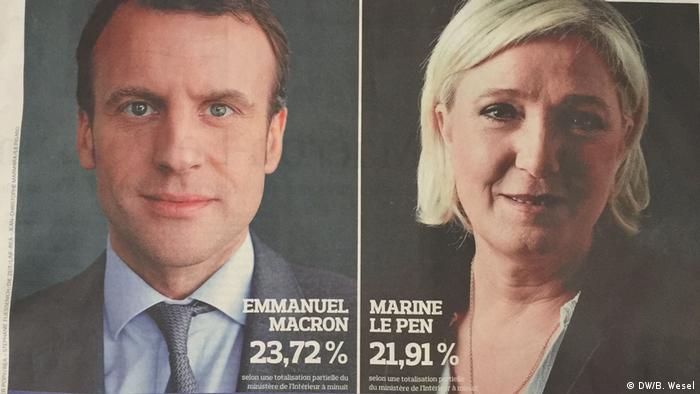 The French voters did the right thing. At least a quarter of them. They denied the knockout stage of the election to the two candidates living in socialist or communist daydreams (Benoit Hamon and Jean-Luc Melenchon). They denied it to a scandal-ridden conservative who's only program of late was to conjure up conspiracy theories (Francois Fillon).

But they did send Marine Le Pen, the terror of all pro-Europeans, immigrants and open-minded businesspeople to the second round. And, as long as she's on the ballot, she can be elected.

All right, it's not likely. The comparison with Donald Trump doesn't really work because the margins in the polls between Emmanuel Macron and Le Pen are much larger than they were in the US election. Still, a terrorist attack might happen or a scandal could emerge. We know about Macron's past as an investment banker, as a student of the prestigious National School of Administration and as Minister of the Economy under president Hollande. If anything hits him in the next two weeks that blows away the thin anti-establishment veil he's worn in the last months, things might turn upside down quickly.

Macron is as firmly a part of the establishment as his rival Fillon or President Francois Hollande. But somehow he managed to detach himself from it. Maybe because he left the Socialist party and formed his own movement, En Marche. Maybe because he's only 39 years old and voters think he's open to new, untrodden paths that will lead France back to former glory, or at the very least less unemployment. Maybe he has become the perfect projection screen for French dreams. In any case, he needs to make his magic work for another two weeks.

If he does, he will be France's next president. If he doesn't it might be Marine Le Pen, the closest Europe has come to a political heart-attack in the post-war era. It would be much worse than Brexit. A Le Pen presidency would threaten the common currency and the German-French economic engine.

But for now it looks like the European Union will live to fight another day. After the relief many feel must come the realization though that Le Pen will not go away. Only if Macron can truly make due on some of his promises and rid France of the loser image it has acquired over the last decades, give all of its people back some economic opportunity and pride, will the likely victory over right wing populism be a lasting one.

Opinion: Erdogan's influence on the German election 4h ago