European bourses have made significant opening gains and the euro briefly vaulted to five-month peaks after the market's favored candidate, Emmanuel Macron, won through the first round of the French election. 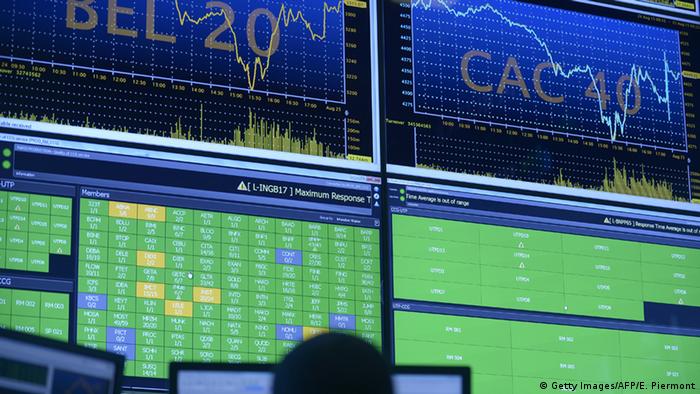 In morning trading on Monday, the Paris CAC 40 index shot up 4.1 percent to 5,267 points, while Germany's DAX 30 jumped to a new all-time high of 12,417 points before falling back to below that historic level. London's FTSE 100 also gained, climbing 1.4 percent. Madrid's IBEX 35 index rallied 3.5 percent compared with Friday's close.

The gains came as centrist Emmanuel Macron took a big step toward the French presidency on Sunday by winning the first round of voting and qualifying for the May 7 runoff alongside far-right leader Marine Le Pen.

The outcome lessens the risk of an anti-establishment shock on the scale of Britain's vote to quit the European Union with Macron widely tipped to win the final vote and keep France in the union.

Blip on the screen?

Tim Riddell, an analyst at Westpac said the rise of the euro and "risk appetite rebounding is understandable," warning at the same time: "Such gains are likely to be contained when markets reflect upon the marked shift away from the 'establishment' and just how effective the new president may be."

"Macron is no serious reformer. His policies won't resolve the problem of chronic unemployment. At best, he can alleviate its results," he told the news agency DPA.

Clemens Fuest, head of the German Ifo economic think tank is more optimistic, saying Macron can achieve a "change for the better" for the French economy. Macron would seek to reduce the state quota and improve conditions for investment and employment, he said.

At the same time, Fuest is worried that some 40 percent of French voters had favored "radical and anti-European" candidates."