Münster authorities have been pumping millions of liters of oxygenated water into the Aasee lake in an effort to save its fish population. Tons of fish have died after a recent heat wave led to a drop in oxygen levels. 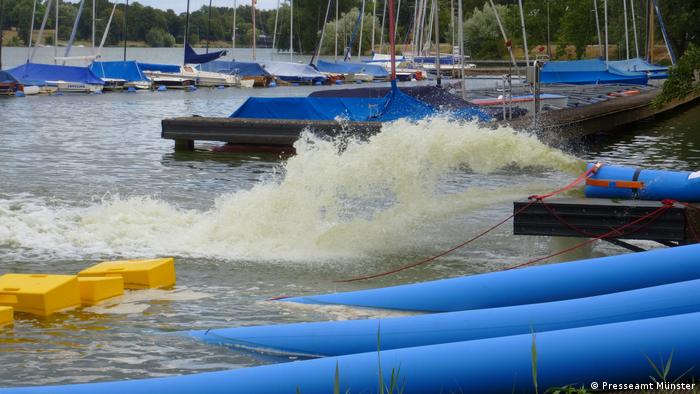 Authorities in the western German city of Münster are making desperate efforts to save the remaining fish in Aasee lake after tons of fish were found dead earlier this week.

The city has been pumping in 3.5 million liters of water in the lake every hour in an effort to increase oxygen levels in the lake.

The effort follows the deaths of more than 20 tons of fish in the lake, caused by a lack of oxygen.

Authorities say the heat wave that swept across Europe killed the green algae in the lake, causing oxygen levels to drop. 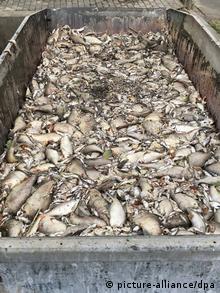 Tons of fish have died in Aasee lake due to shortage of oxygen.

The problem was compounded by the sudden rise in fish carcasses, which take up oxygen as they decay.

"The Aasee lake as an ecosystem has suffered a heart attack. We're now doing everything we can to help it recover," said Münster city spokesman Joachim Schiek.

Schiek confirmed that the majority of the fish in the lake had suffocated to death in the heated water.

The water injection is expected to last until Monday.

Over the past week, dead fish have been pulled out of Germany's rivers and lakes by the ton — the extreme heat and a lack of rain have proven too much for them. Global warming is among factors altering fish habitat. (10.08.2018)

A ton of dead fish has been recovered near the German-Swiss border despite man-made 'cool pools' to prevent fish fatalities. Europe is in the throes of a heat wave that is impacting life in many different ways. (06.08.2018)