Over the past week, dead fish have been pulled out of Germany's rivers and lakes by the ton — the extreme heat and a lack of rain have proven too much for them. Global warming is among factors altering fish habitat. 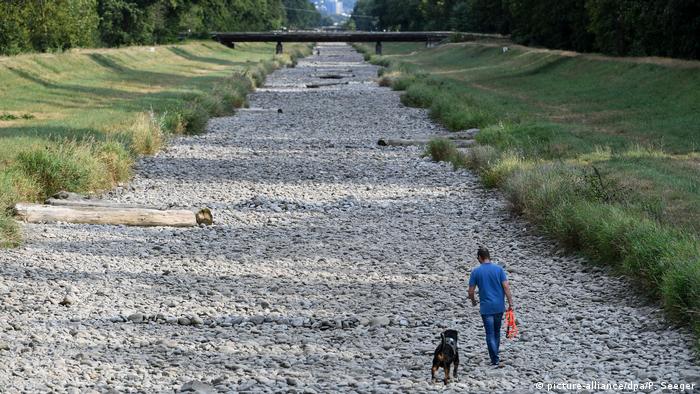 But these days, the river has turned into a rocky desert wash (pictured above).

The local fishing club had preemptively caught fish and released them in other bodies of water.

Peter Rudolph, an expert for aquatic biology and environmental issues in Freiburg, has been at the ready. "We regularly measure the temperatures of lakes and rivers," Rudolph told DW.

If the weather gets too dry or temperatures rise precariously, he informs authorities. Then he and other fish-savers take their electric dip nets and go to work.

Such nets create a guiding current and stun fish at the same time. With this method, large quantities of fish can be removed and transferred to other areas — without damaging the aquatic animals.

"You have to continuously measure water temperature and oxygen content," Rudolph explained. "When you see the first dead fish, it is actually too late to save the stock. All you can do then is leave the matter over to nature." 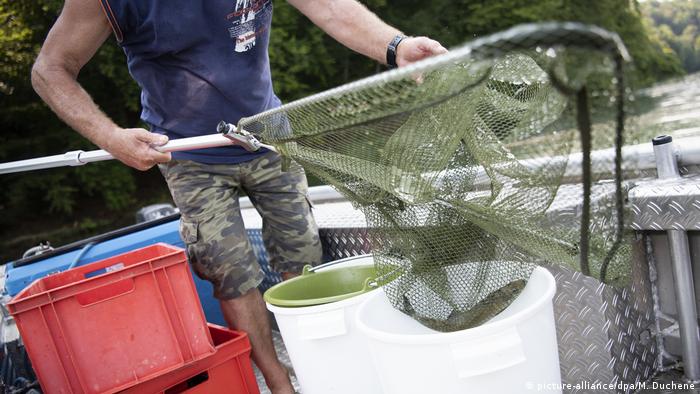 In hot water: Fisherman pull dead fish out of the Rhine, like here in Switzerland

In the Rhine River, which begins in the Swiss Alps, runs through Germany, and empties into the North Sea, the situation is more dire.

Although the river is wider and contains more water than the Dreisam, fish particularly on the Swiss side of the Rhine have been dying by the ton.

Over the course of the heat wave in Germany, which lasted all of July and the first two weeks of August (with some very warm weeks in May and June as well), water in sections of the Rhine warmed to 28 degrees Celsius.

The Federal Institute of Hydrology (BfG) put daily average temperature for the Upper Rhine at 27.2 degrees Celsius. Also the number of consecutive days with water temperature above 25 degrees Celsius is significant — according to the BfG, that's currently at 15. 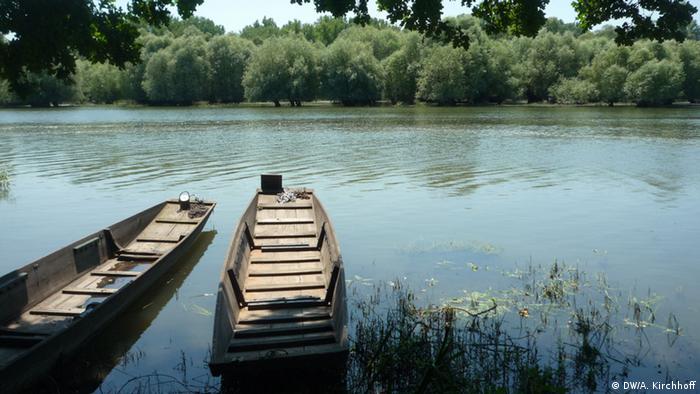 Firefighters and the Federal Agency for Technical Relief have pumped millions of liters of water into lakes for oxygen enrichment. In Switzerland, measures included digging out deeper pools to create cool zones and opening tributaries to fish.

Nevertheless, 20 tons of fish carcasses were pulled out of a reservoir near Ellwangen in Baden-Württemberg.

The mass die-off recalls memories of the summer of 2003, when 50,000 fish died in the Rhine alone. At that time, 90 percent of the grayling population in that region was lost.

Carp, chub and bream are more robust in warmer temperatures, and tolerate the lower oxygen concentration better. As climate change progresses, such species have greater chances of survival, biologists say.

Rudolph also believes that invasive species such as the topmouth gudgeon — imported from Asia — and the sunfish, originally native to the USA, will better withstand climate change. But declines of local species will reverberate through the ecosystem. 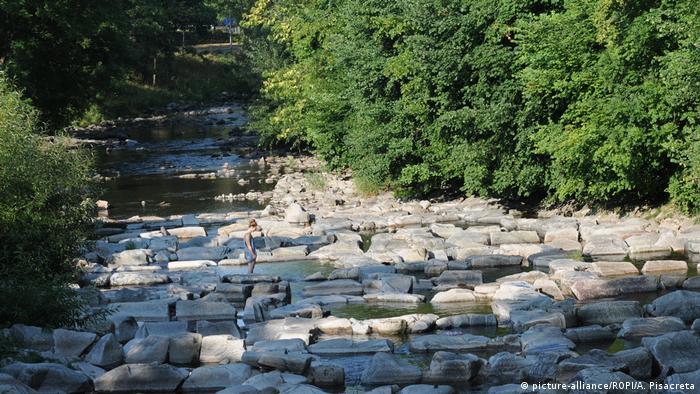 Isolated pockets of water are all that's left of the Dreisam, and fish are stuck there

Although 2003 saw similar high temperatures, this summer, the drought has also been a major problem for the fish.

"Heat and lack of precipitation make for a disastrous combination," explained Rudolph.

Because in Germany many riverbanks have been deforested, water along the water's edge offers no shade. At low water levels, the fish are exposed to full sunlight, and can find no protective shelter.

Floodplains are crowded out by settlements or industrial areas, or are used by agriculture. Rivers have also been channelized to make their paths fit with human wishes.

"The river needs more space, and more trees along its banks," Rudolph said, calling for restoration. "Trees would provide shade, and underground roots that protrude into the water could provide shelter."

"But the problem is, who's going to pay for compensation if owners of the shore areas have to give up some of their land?" 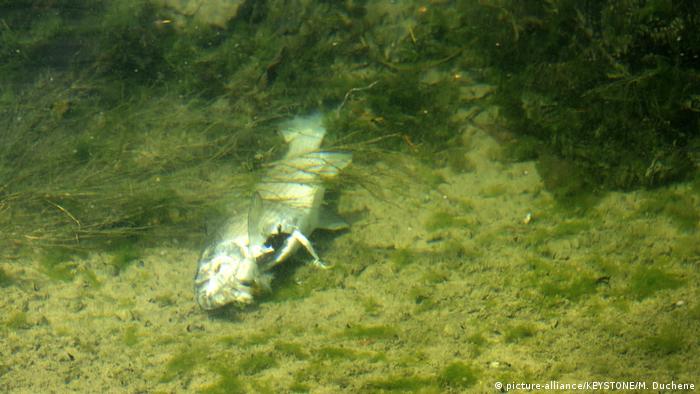 The agricultural, shipping, traffic and mining lobbies are too powerful, complain environmental groups such as BUND (German Federation for the Environment and Nature Conservation).

The EU has been exerting pressure on Germany for years, as its Water Framework Directive prescribes largely natural plants and fish in the waters, free flow of streams and rivers to benefit all living organisms, and near-natural and unspoiled shore zones.

Lakes in Central Europe have also lost their ecological balance, as their water temperature has increased to up to 30 degrees Celsius.

Read more: Can we save our lakes from global warming?

Light and heat promote the growth of algae and plants. Especially treacherous is blue-green algae, which can produce toxins, endangering bathers. This can even contaminate drinking water.

Moreover, in lakes, the different layers of water don't easily mix. As a result, oxygen from the air does not reach deeper water. If there is no oxygen, the fish swim to the warmer water surface. This speeds up circulation in these cold-blooded creatures, so that they have to eat more — which leads to further stresses. Since the 1970s, researchers from the Leibniz Institute of Freshwater Ecology and Inland Fisheries have been documenting changes in the Müggel Lake near Berlin.

Researchers have been alarmed at the 0.34-degree Celsius increase in water temperature per decade over recent decades, as the shorter ice duration in winter and indirect effects such as changes in light and oxygen, as well as runoff from over-fertilization by agriculture, are majorly impacting lake ecosystems.

Long-term climate impact research will be indispensable in order to develop adaptation strategies based on the observations, researchers think.

High temperatures and a prolonged drought are disrupting daily life in Germany. Ship cargo on the River Rhine has been reduced by half and fish populations have been threatened by high water temperatures. (26.07.2018)

Stars get naked for the love of fish

Big-name stars are getting their kits off to send the message that European waters are being drastically overfished, which is putting marine ecosystems under threat and could even take food off our plates. (13.06.2018)

Why so many gosh darn jellyfish?

Mediterranean resorts are having to ban swimming because of plagues of jellyfish, which scientists blame on a complex cocktail of human impacts, from climate change to overfishing. (12.06.2018)