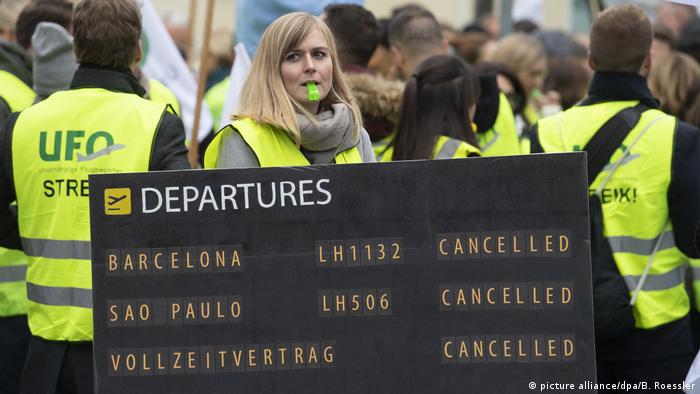 Flight attendants at German airline Lufthansa are planning a further strike, as a long-running feud over cabin crew UFO union's right to be recognized and better pay for its members refuses to disappear.

Details of the upcoming strike will be announced on Wednesday, a UFO spokesperson said on Saturday, adding that it would be a "considerably broader measure" than the union's previous strike, which lasted for three days and led to 200 flight cancellations.

Longer strike is the only option left

The latest strike announcement follows failed talks between UFO members and Lufthansa. UFO spokesperson Nicoley Baublies said on Friday that UFO would again attempt to resolve issues via usual channels, but should this fail then a strike would be UFO's only remaining option.

Longer strikes were necessary because the previous shorter strikes had not been effective in increasing pressure on Lufthansa. The union said it would also examine the legality of an open-ended strike.

Under the terms of a 2016 agreement with Lufthansa, the union cannot carry out any industrial action regarding current demands before February 2.

The airline has said it believes pay issues could be quickly solved, with executive board member Michael Niggemann saying the company remained prepared to continue mediation and arbitration of the disputes.

Why is UFO striking?

If the strike goes ahead it will join the three rounds of strikes organized by UFO in 2019 and the disagreement has become increasingly divisive. Around 2,000 mostly internal flights were canceled last year, forcing Lufthansa to exchange plane tickets for train tickets in an attempt to minimize disruption for passengers.

Disagreements over the union's right to be recognized as an organizing body have been at the forefront, along with disputes over wages.

There has also been a dispute over the dismissals and lawsuits against former and current board members.

Cabin crew have gone ahead with a 48-hour strike as of midnight on Thursday. Lufthansa has offered train tickets for travel within Germany to make up for hundreds of cancelled flights. (07.11.2019)