Lion Air crash: Does Indonesia have an air safety problem?

The mysterious crash of a brand new Boeing aircraft in Indonesia has drawn attention to the country's poor air safety record. However, experts are warning against drawing speculative conclusions. 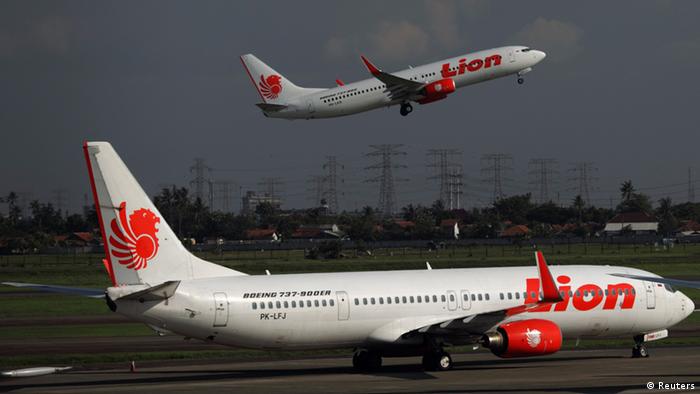 As investigators continue to recover wreckage and analyze flight data from the recovered black box recorder of Lion Air flight 610, there is no obvious explanation for what caused the brand-new Boeing aircraft to fall out of a clear sky and plunge into the Java Sea 12 minutes after taking off from Jakarta.

The crash, which killed all 189 people on board, is Indonesia's second-worst air disaster, after the 1997 Garuda Indonesia crash near Medan, which killed 234 people.

Although there is currently no indication that poor infrastructure or lagging safety standards on the ground caused the accident, this latest air disaster in Indonesia casts an unfortunate light on the country's poor air safety record.

Indonesia is one of the world's fastest growing aviation markets, but this rapid growth has put a lot of pressure on the country's aviation network. Reuters news agency reported that between 2012 and 2017, Indonesia's transport safety panel investigated 137 "serious aviation incidents."

"For a long time Indonesia had a serious problem with regard to aviation safety," Harro Ratner, CEO of the air safety watchdog, Aviation Safety Network, told DW. "It is not so much the number of passengers, but the fast growth of the airlines."

Indonesian airlines have recently emerged from international pariah status. In 2007, the US and the EU banned all Indonesian commercial airlines from their airspace after a series of incidents.

"In 2007, the US concluded that the Indonesian authorities were not able to properly oversee the aviation activities in the country," said Ratner. "They said Indonesia was not complying with international (ICAO) standards."

However, in 2016, the US Federal Aviation Administration (FAA) once again allowed Indonesian aircraft and in June 2018, the EU lifted its ban.

"The country and airlines are now, after a long period of time, considered safe by international standards," said Ratner, adding that some recent incidents, not including the Lion Air crash, indicate that "airport operations and air traffic control is an area where work needs to be done."

"Over the past couple of years there have been two runway collisions and recently an aircraft landed on a runway and hit a piece of equipment that was left there after maintenance works," said Ratner.

On Monday, a European Commission spokesperson said the EU has no immediate plans to renew the ban on Lion Air. The Associated Press reported that the Australian government told its officials and contractors not to fly on the carrier pending findings from the crash investigation.

Channel News Asia reported a day after the crash that an official with Indonesia's National Transportation Safety Committee said that accidents were a simple consequence of "transportation."

"Where there is transportation, there will be accidents. Everywhere it's like that," the official was quoted as saying. 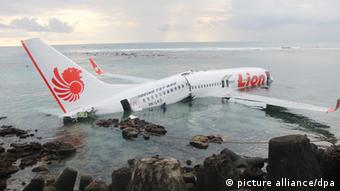 In April 2013, a Lion Air plane crashed into the water as it overshot the runway at Bali's Ngurah Rai International Airport in Bali

Recent deadly air disasters in Indonesia include the 2014 AirAsia crash, which plunged into the Java Sea en route from Surabaya to Singapore, killing 162 people. The cause was determined to be a malfunctioning rudder, which had reportedly caused repeated problems on the aircraft in the months before it crashed.

The 2014 incident drew international attention to deficiencies in Indonesia's aviation navigation system. The Wall Street Journal reported in January that pilots said the infrastructure in Indonesia was "unsophisticated and doesn't do enough to help airliners contend with poor flying conditions."

In 2004, a Lion Air jet slid off a runway, killing 25 passengers and crew. In 2015, Lion Air's co-founder Rusdi Kirana reportedly said that "my airline is the worst in the world, but you don't have a choice."

Is the airplane to blame?

The doomed aircraft involved in Monday's crash was a Boeing 737 MAX 8, which had its first flight in August. The MAX series is the newest design of Boeing's 737 model, which is the best-selling aircraft ever produced. The first delivery of a 737 MAX aircraft to an airline was in May 2017, and Boeing says the 737 MAX series is the fastest-selling aircraft in the company's history, with over 4,700 orders already placed.

Boeing, along with the US National Transportation Safety Board (NTSB), has joined the investigation in Indonesia and Indonesian officials are reportedly traveling to the US to meet with Boeing designers.

"It's no surprise that Boeing is at the crash site in Indonesia, and this could draw suspicion that they are trying to influence the investigation as to not draw any failures to Boeing," said Giemulla.

"A manufacturer does not want design failures detected while the whole world is watching."

"The liability question will arise very soon. Relatives will soon ask who is liable for the death of loved ones. They will ask for compensation and of course Boeing as a manufacturer is one possible liable party."

The evening before the crash, the same aircraft had reportedly been involved in a loss-of-altitude incident on a flight from Bali to Jakarta. The pilot issued an alert, but was able to correct the problem and continued the flight.

Giemulla, who is an expert on classifying aviation incidents, said that a plane suddenly dropping a few hundred meters was not an "unusual" occurrence.

"These types of incidents can have nothing to do with the plane itself," he said, adding that sometimes there are so-called "air pockets" or a vacuum in the airspace.

"I do not think that this experience the night before necessarily has something to do with this crash," he said. "We will see what information the black boxes have."

The pilot of the Lion Air jet that crashed on Monday reportedly had over 6,000 hours of flying time.

"It's quite unlikely that this is a maintenance problem, because maintenance issues usually occur much later," added Giemulla. "Until the black boxes can be analyzed, everything is speculation."

After days of searching, divers have recovered a flight recorder from a Lion Air jet that crashed in Indonesia this week. Investigators hope the device will reveal why the Boeing 737 MAX 8 plane plunged into the sea. (01.11.2018)

Teams are racing to recover data recorders from Lion Air flight JT610 to determine why the brand-new Boeing crashed minutes after takeoff. Reports have emerged that there were problems with the jet's previous flight. (30.10.2018)

As recovery teams try to retrieve the flight recorders from the tail of the AirAsia plane that crashed into the Java Sea in late December, DW examines why air disasters keep happening in the region. (08.01.2015)