Teams are racing to recover data recorders from Lion Air flight JT610 to determine why the brand-new Boeing crashed minutes after takeoff. Reports have emerged that there were problems with the jet's previous flight. 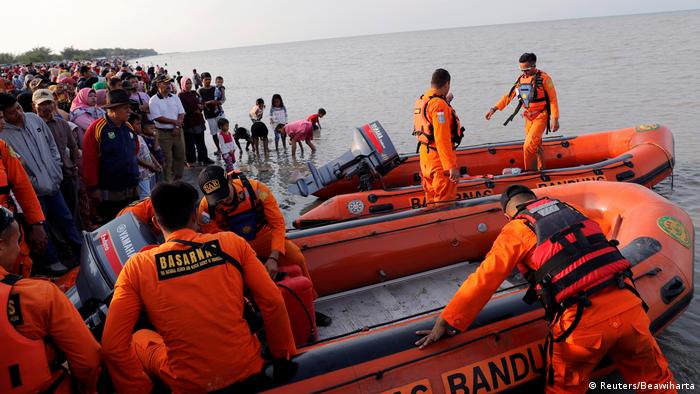 Search and rescue teams in Indonesia resumed their hunt on Tuesday for a Lion Air passenger plane that crashed into sea with 189 people on board.

The months-old Boeing 737 MAX 8 jet plunged into the Java Sea on Monday just 13 minutes after taking off from the capital.

Divers scoured the seabed, looking for the hull of the plane, which will contain the remains of the passengers as well as the jet's flight recorders — which experts hope will contain key data about why the plane went down.

Over 800 people from several agencies are taking part in the search, including remotely operated underwater vehicles and specialist ships.

"We are prioritizing finding the main wreckage of the plane using five war ships equipped with sonar to detect metal underwater," said Yusuf Latif, a spokesman for Indonesia's search and rescue agency.

Officials said they are confident that the plane's so-called black boxes will be recovered, since the plane went down in relatively shallow waters.

Several reports have emerged that the plane experienced issues on a previous flight from Bali to Jakarta on Sunday.

Alon Soetanto, one of the passengers on that flight, told TVOne that the plane dropped suddenly several times at the beginning of the flight, causing other passengers to "panic and vomit."

Indonesian TV presenter Conchita Caroline said that prior to takeoff on Sunday, the plane was forced to return to its parking space due to a technical problem. She also said there was an "unusual" engine roar.

The chief executive of Lion Air Group, Edward Sirait, said that the plane experienced a technical problem, but that it was "resolved according to procedure."

The crash is the worst airline disaster to occur in Indonesia since an AirAsia flight crashed into the sea in December 2014, killing all 162 people on board.

The crash has also renewed concerns about safety in Indonesia's aviation industry. The country's airlines were barred from flying to Europe in 2007, but the ban was completely lifted in June this year.