After days of searching, divers have recovered a flight recorder from a Lion Air jet that crashed in Indonesia this week. Investigators hope the device will reveal why the Boeing 737 MAX 8 plane plunged into the sea. 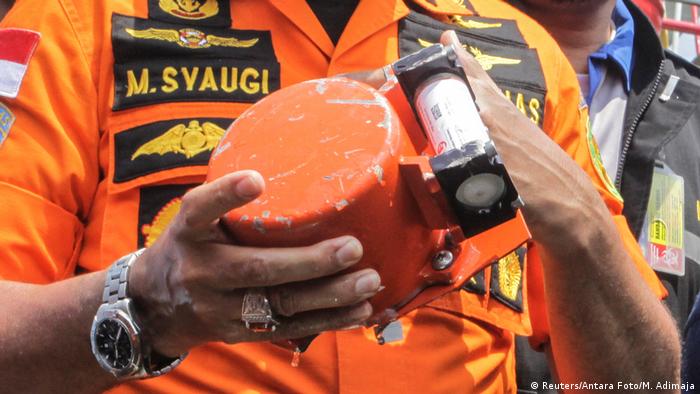 Teams of divers in Indonesia found one of two flight recorders from Lion Air flight JT610, which went down with 189 people on board earlier this week, an official confirmed on Thursday.

Authorities said the flight data recorder was recovered and that teams are still searching for the cockpit voice recorder. Both could contain key information that will help determine why the nearly brand-new plane crashed into the Java Sea just 13 minutes after takeoff.

Tragic crash: The Lion Air passenger plane crashed on Monday just 13 minutes after taking off from the Indonesia capital, Jakarta, with 189 people on board. The crash was Indonesia's worst airline disaster in two decades and sparked a massive search in the Java Sea. Data from flight-tracking sites show that the plane experienced erratic changes in its altitude and speed before it lost contact. Experts warn, however, that the data needs to be checked with the information in the black boxes to determine the cause.

Concerns over safety: The crash has raised questions about airline safety not only in Indonesia but also about the Boeing 737 MAX 8 plane. The jet had only been in service for around two months when the crash occurred, with Lion Air stating that both the pilot and co-pilot were highly experienced. However, the budget airline admitted that the new Boeing 737-MAX 8 experienced an unspecified technical issue on its previous flight from the island of Bali last Sunday.

What happens next: The data from the black box will need to be examined, with a preliminary report on the crash expected to be released within a month. A complete report may take months to complete. Meanwhile, search and rescue teams are continuing to look for the second flight recorder as well as the fuselage, or main body of the plane.