Investigators want to discover the airliner's black box to understand why the new Boeing 737 MAX 8 crashed. The tragedy has raised questions about Indonesia's safety record and potential issues with Boeing's new jet. 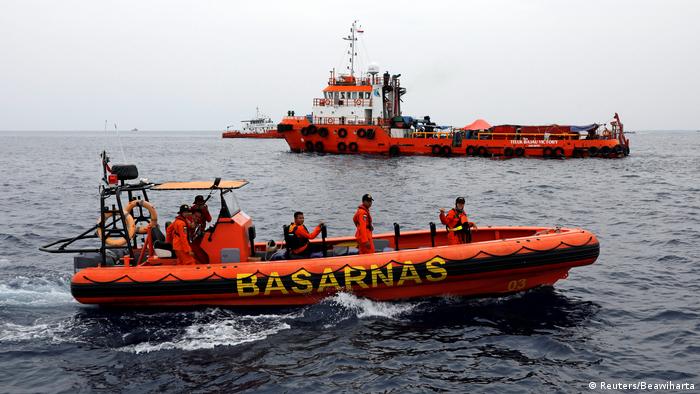 The fuselage of the Indonesian passenger plane that crashed into the Java Sea with 189 people on board two days ago may have been found, the country's military chief said Wednesday.

The location of part of the fuselage may have been discovered using sonar technology, armed forces chief Hadi Tjahjanto told reporters in Jakarta.

Read more: Reality check: How to crash a flight simulator

"We strongly believe we've determined the coordinates of the JT 610 fuselage," he said. "However, it has not yet been confirmed that it is part of the fuselage."

The head of the National Transportation Safety Committee separately told reporters that the "pings" detected by search teams were almost certainly from the plane's flight recorder due to their regular interval.

"The ping signals are consistent with those of the black box," Soerjanto Tjahjono said, adding that teams of divers were being sent to locate it.

Search teams have so far only found debris and body parts from the strewn wreckage of the Boeing 737 MAX 8 plane that plunged into the sea only 12 minutes after takeoff from Jakarta airport on Monday morning.

Search boats and divers are scanning water some 30-40 meters (100-130 feet) deep for signs of the downed plane, which was headed to the town of Pangkal Pinang.

Investigators are hoping to find the fuselage and flight data recorder to understand why the 2-month-old Lion Air jetliner crashed shortly after the pilot had requested to return to Jakarta after takeoff.

The crash has raised questions over the safety of Indonesia's fast-growing aviation industry.

Lion Air has said the pilot and co-pilot were highly experienced, with more than 11,000 combined hours of flight experience.

However, the budget airline admitted that the new Boeing 737-MAX 8 had an unspecified technical issue on its previous flight from the island of Bali on Sunday.

This has raised questions over possible problems with Boeing's new fuel-efficient 737-MAX 8 jet, which only went into service a few months ago. The crash was the first for the Boeing 737 MAX.

Boeing had suspended its first commercial delivery of the jet last year due to an engine issue. It was later cleared for sale, and Boeing has received orders for thousands of the jets from dozens of airlines. Lion Air has ordered 50 of the jets at an estimated cost of $6.2 billion (€5.5 billion). It currently operates nine of the aircraft.

Indonesian transportation authorities ordered an inspection of all 737-MAX aircraft on Tuesday.

Lion Air said it would be meeting with Boeing representatives on Wednesday to discuss the crash and the jet's safety.

A sports plane hit three people while attempting to land on a mountain in central Germany, police have said. Rescuers have been deployed to the scene. (14.10.2018)