Reality check: How to crash a flight simulator | Science | In-depth reporting on science and technology | DW | 07.09.2018

Reality check: How to crash a flight simulator

Flight simulators are a safe way to train young pilots before they fly an actual airplane. But exactly how real are these simulators, and does the experience transfer to flight? 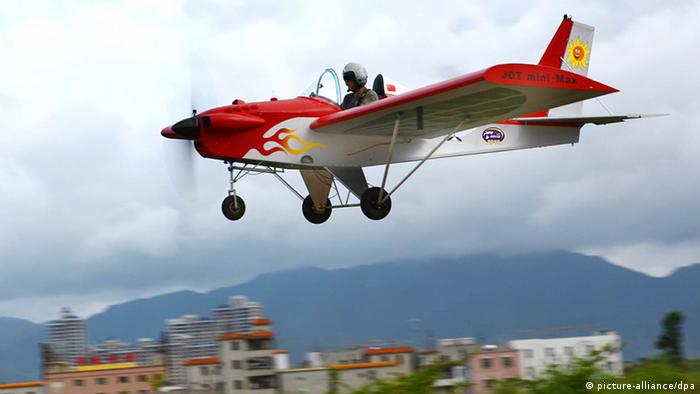 Whether it's to help fighter pilots gun down the enemy, or guide rescue teams to an accident site, flight simulators have been used to help pilots practice their skills for almost as long as we've been flying. The simulators show us the way, help us plan routes, highlight places we should avoid, and train us how to calculate distances and risk.

And as our flying machines continue to advance, so do the simulators.

One of the earliest flight simulators was little more than a wooden barrel on stilts. Today's simulators, meanwhile, ride on hydraulics, the cockpits boast as near to real instrumentation as possible, and the entire flight can be mapped out on a huge wrap-around screen.

Read more: A fly by the 2018 Farnborough Airshow

That goes for commercial planes — the big and the small — and military aircraft, including helicopters. Perhaps especially pertinent for military operations, simulators offer trainee pilots the chance to practice flying in dangerous areas, albeit virtually.

"We can replicate all sorts of operational scenarios for crews to fly in and hopefully practice their skills before they do it for real," said Chris Raynes, who heads Helicopter Services at Inzpire, a UK company that specializes in military simulators.

One of their machines, a targeted fidelity simulator (TFS), features a life-size cockpit that sits in front of an almost immersive, floor-to-ceiling, U-shaped screen. As with a lot of these systems, the TFS even provides "obstruction information."

This warning system works like a third eye. Many obstructions can be calculated using layers of different maps, whether that's digital copies of analog charts or satellite data, which is also useful for real-life flight. 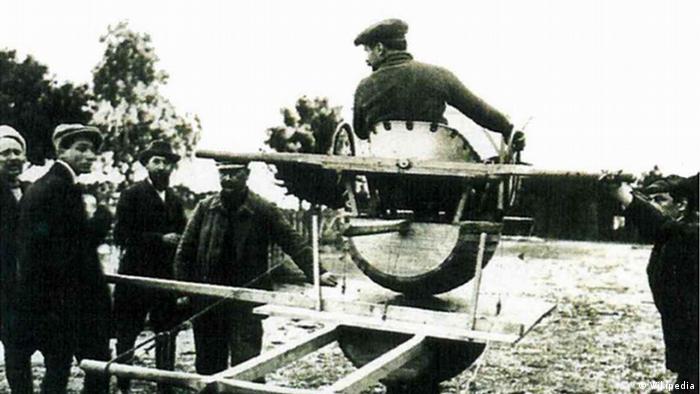 Imagine you're navigating your chopper over what looks like pleasant green fields, but over in the near-distance, an object starts flashing red — you will read that as something you had better miss.

"You can see there we have a mast approaching. It's flashing red," Raynes warned during a demonstration. "With the current trajectory of the aircraft, we would hit that mast. So the system is giving the pilot as much warning as possible to avoid that conflict."

GECO is proprietary software that runs on off-the-shelf tablet computers. It aims to turn map data, which you would normally carry in paper form, into 3D visualizations and satellite imagery at your fingertips.

But as accustomed as we've become to swiping through life, all that still needs to be trained and got good at — on top of learning how to use the pedals on the floor for pointing the aircraft in a straight line, the cyclic, a joystick, between your legs for back, forwards, left and right, and the "collective" lever in the middle for up and down.

"If you'd have flown a helicopter before, it would have been good," says Inzpire's Alistair Howard, as I clamber into the simulator. "You've got a lot to get a hold of!"

And this is just a simulator, remember.

Howard takes his simulators seriously. Later, when he tells me it's time to get out he won't even let me pretend to crash the thing.

Simulators, it seems, are too much like the real thing for the former service pilot.

"I've flown 4,000 hours in helicopters and this really behaves like a proper one," says Howard. "All those things you're experiencing, like feeling uncomfortable because you've let the speed wash off ..." 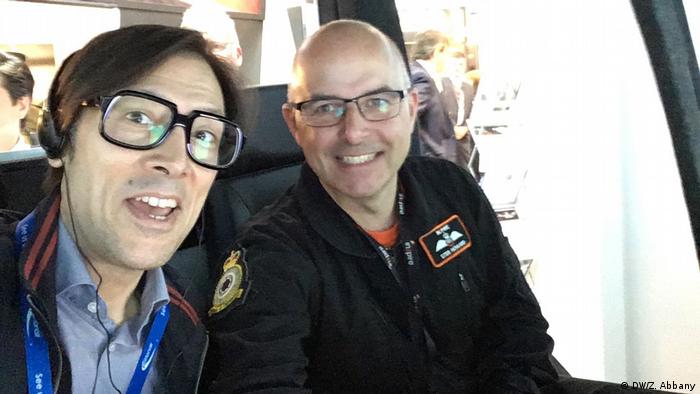 At one point, I couldn't get the helicopter to fly straight — I kept pointing it too far up or too far down. When that happens, it's called "pilot induced oscillation."

But just like a waiter, once on a childhood summer holiday, taught me to carry cups of coffee to my mum and dad without spilling them by looking straight ahead rather that at the cups, Howard told me to point the aircraft's nose at the horizon. Like magic the oscillation stopped.

"That's the sort of thing we can teach pilots in a simulator," he says. "Imagine doing that in a real aircraft and crashing it — it'd be nasty."

It would indeed. I got dizzy just standing next to the helicopter TFS and that was nasty enough. So perhaps I don't have the "right stuff" for flying.

Luckily not all simulators move like real aircraft. Some are stationary — and apparently just as real.

There's a company called Luciad, which, together with Lufthansa and SAP, has developed a simulator of a truly different kind. Instead of teaching pilots, it simulates their flightpath. That can be especially important if you're on a military mission and don't want to get picked up by plane spotters or … terrorists.

Say you're flying a low-observable, or stealth, aircraft like the F-35.

The F-35 is virtually undetectable. But if you forget to check the weather before you fly, vapor trails from the jet engines — known as contrails — will be your undoing. 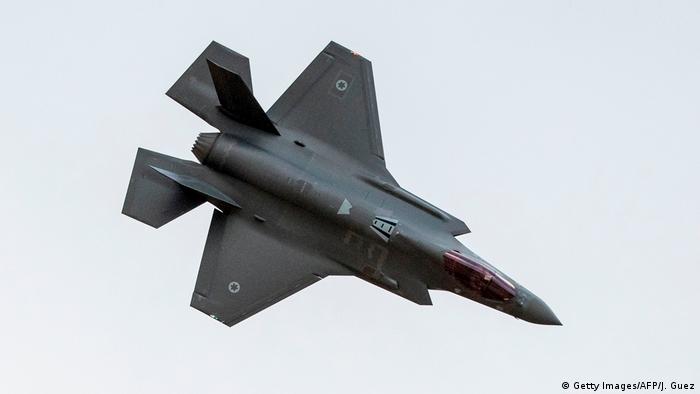 Even stealth aircraft like the F-35 can leave trails ... contrails to be precise

"If you're an enemy system and you're looking for the F-35, you won't see it on radar," says retired wing commander Tony Wheeler, a defense director at Hexagon Geospatial - Luciad. "But if you can see one of its contrails, the F-35 system's not going to be very effective."

Luciad's system will simulate where you're most likely to create contrails on your chosen flight path, and that will show you what to avoid.

So, trainee pilots, remember to check the weather.

And then remember that not every simulation is perfectly real.

Euramec make flight training devices with yet another difference.

Take their Diamond DA-42 simulator. For its European and American customers, Euramec will rip the roof off. I don't know about you, but I've never flown topless.

"In Europe, flight schools tell us to take the canopy off the simulator, because it gets hot in there, there's no air conditioning, it's difficult to communicate and there are safety issues, too," says Euramec's CEO Bert Buyle when we meet. "Imagine the building is on fire and you have a canopy over your head."

Meanwhile, in China, which according to Buyle is the biggest growing market for trainee pilots (next to Ethiopia and Rwanda), flight schools want the canopy on "because the real aircraft looks like that." 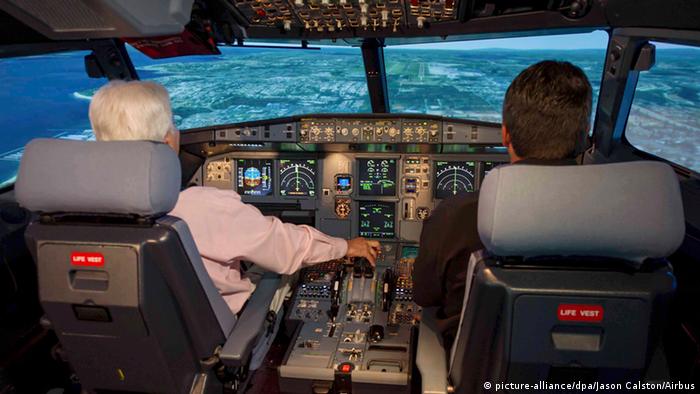 A flight simulator should be as near to the real thing as possible. As technology improves, so do the simulators

But surely it's not merely about "the look" of a plane? Haven't the Chinese got a point? If you change the environment, don't you change the authenticity of the simulation?

"No, it doesn't make a difference in training," says Buyle. "It's just a minor, cultural thing. Their perception of simulation is different. That's all."

If that's all you've got to go, then — the controls at your hands and the vision of a virtual flightpath, how much of the simulated experience transfers to the real thing?

So they do big screens too.

From wrap-around to tiny and virtually static

You can get your DA-42 simulator with a 240 degree wrap-around screen, similar to Inzpire's helicopter model, because it's cheap enough to do, says Buyle. "You don't really need a big screen," he admits, "but it does make the flying experience more realistic."

What's "real," though, would depend on the pilot.

Luciad's Tony Wheeler let me try a flight simulator that had the smallest screen ever, and no cockpit other than the controls screwed to a work surface. For me, that's all it took. I know it was just a simulation, but it left me with the very real feeling that putting me at the controls is asking for trouble. Because I did crash this one.

High fuel prices, fare wars and a depreciating rupee are making it difficult for Indian airlines to stay aloft. Despite increased passenger numbers, observers say operating models have to change. (29.08.2018)

Opinion: They must know they're bad

It's an open secret at the Farnborough International Airshow that a huge chunk of the business done is military. So why, asks DW's Zulfikar Abbany, don't we, or the arms companies, want to talk about it? (19.07.2018)