Libya′s deputy prime minister tells DW′s Conflict Zone: ″We have no slavery″ | News and current affairs from Germany and around the world | DW | 20.11.2019

Libya's GNA government is struggling against militias and ISIS, while hundreds of thousands of migrants seek a route through to Europe and have become prey to traffickers. The Libyan Deputy PM speaks to Conflict Zone.

Will Russia fill the vacuum in Libya? Moscow’s supports strongman Field Marshal Khalifa Haftar, who has been fighting the internationally recognized government in Tripoli since April.

The Government of National Accord (GNA) says that Haftar had failed in his bid to take control of the country. Libyan Deputy Prime Minister Ahmed Maiteeq told DW:  "After eight months of fighting … he didn’t get Libya." 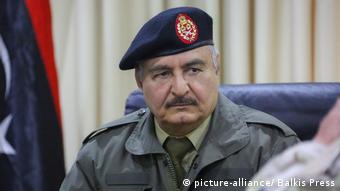 Leader of rebel LNA, Field Marshal Khalifa Haftar who has led offensive against Tripoli since April.

Maiteeq told Tim Sebastian on Conflict Zone that despite support from outside, Haftar had been unsuccessful in taking the capital, Tripoli.

"After eight months of fighting with all the support that Haftar is getting from outside Libya, he didn't win," Maiteeq said.

But more than 1,000 people were killed in recent clashes. "Haftar sent a clear message to everybody that he doesn't want a democracy in Libya," Maiteeq said.

"We believe that we've been a U.S. ally for quite a long time."

Washington has long backed the GNA, but US President Donald Trump has praised the warlord, citing Haftar’s efforts againt the Islamic State.

"I think the president is badly informed," Maiteeq said. 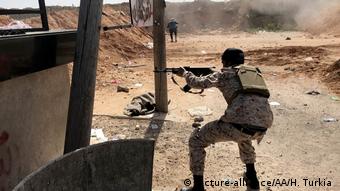 Sebastian said Washington wanted the GNA to negotiate with Haftar, which the Libyan Deputy PM disputed.

"No, Washington, sorry … did not say that they want us to talk with Haftar. Washington said that the political process should be peaceful."

The US has said they need Haftar to create stability in Libya.

The United Nations has imposed an arms embargo and called for an end to international intervention in Libya.

The country has been in turmoil since a western-led coalition under a Security Council humanitarian resolution helped Libyan rebels to topple Muammar Gadhafi in 2011.

Since then, militias have been battling each other for control of the country’s resources.

"We had a clear program to clean up Tripoli and clean up Libya from all militias," Maiteeq said.

But the GNA government has struggled to control those militias and keep the economy moving forward.

The deputy prime minister said his government had stepped up oil production and stabilized the country’s currency, while battling Haftar, and the Islamic State.

Sebastian challenged Maiteeq on the GNA’s cooperation with militias, some of which have been accused of significant human rights abuses.

International institutions such the World Bank have described "an open war" in Libya for power and wealth capture.

Reports, such as the Small Arms Survey, have documented the influence of militia groups in the North African country.

"The whole world stands by the GNA, politically … But under the table many of these countries are supporting this militia."

Maiteeq said Libya had some 800,000 migrants in the country.  Many are seeking passage to Europe and become prey to human traffickers.

"Libya alone cannot deal with immigrant issues," he added accusing the European Union of failing to keep its promises of assistance.

The EU has delivered only three-quarters of a two-year program due to be completed by the end of October. Among those left in limbo are people evacuated from Libya on a promise of resettlement in Europe. (14.10.2019)

The 15-member bloc has called on warring factions in Libya to cease fighting and enter talks. The body also strongly condemned Tuesday's airstrike on a migrant detention center near Tripoli. (05.07.2019)

Libyan authorities fired warning shots in the air and pointed mounted guns at rescuers and migrants, according to the humanitarian group Sea-Eye. A group spokesman said the act was unprecedented. (26.10.2019)