The EU has delivered only three-quarters of a two-year program due to be completed by the end of October. Among those left in limbo are people evacuated from Libya on a promise of resettlement in Europe. 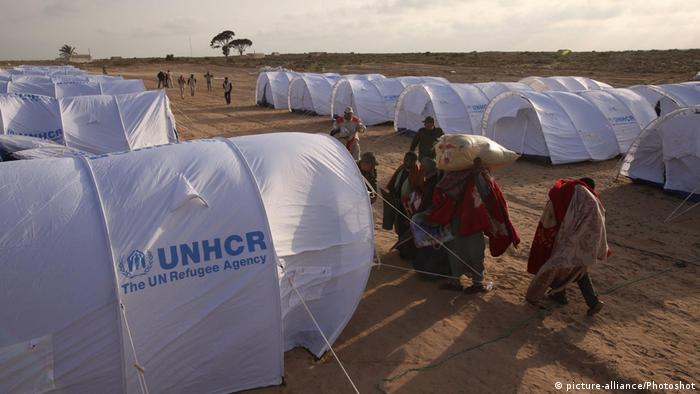 European governments, including the German government, have failed to deliver on a pledge to admit 50,000 refugees by this month, DW has learned.

The European Union launched the resettlement program two years ago with a deadline of October 31, 2019. But only 37,520 people have arrived in Europe under the program so far.

A spokesperson for the European Commission has admitted the target will not be reached by the end of October.

Among those affected are the thousands of migrants detained in camps in Libya. UNHCR, the UN's refugee agency, said European countries' slow progress in fulfilling their promises was one of the factors holding up the evacuation of people facing violence amid the lawlessness and civil war.

Dimitris Avramopoulos, the outgoing EU migration commissioner, said he was "hopeful" that the remaining pledges could be fulfilled by the end of the year.

"I both commend and continue calling on member states to step up their efforts and to make sure they deliver on their pledges as quickly as possible," Avramopoulos told DW.

Mariam, originally from Sudan, was evacuated from Libya by UNHCR and is now waiting in neighboring Niger to be resettled.

She told DW reporter Mariel Müller about the attack in Libya that led her to flee the country.

"I went out to go to a shop," she said. "Three men grabbed me and forced me into a car. They raped me, right there on the street, then just threw me out onto the road."

Mariam now lives in a temporary shelter in a UNHCR refugee camp in the desert.

She is no longer afraid of attacks, but fears for her future as she waits for resettlement — and an end to her search for safety. "I'm tired. I'm very tired," she said.

The UNHCR camps in Niger are now full to capacity with people waiting to be resettled, meaning it cannot evacuate more people to the country from Libya.

Germany among states that didn't deliver

Germany was one of the countries leading the EU resettlement initiative. Last year, Chancellor Angela Merkel publicly promised to accept 10,200 people under the program. A spokesperson for the country's Interior Ministry told DW that just 4,800 had arrived so far. He said that the delay in forming a government after German elections in 2017 had led to "complex organizational preparations" for the refugees' arrival being pushed back.

Sweden, by contrast, has already made good on its promise, resettling 8,750 refugees, as has Britain, which took in 7,800. France, the Netherlands and Finland have resettled at least 80% of the numbers they pledged.

Belgium and Ireland have met around half of their pledges. Belgium said it had suspended resettlements because of an increase in asylum applications from people already in the country. Ireland said it expected to resettle the remaining 537 people it had promised by the end of the year.

Portugal resettled around a third of its quota but also said it would meet its pledge by December 31, which the EU has set as an extended deadline for the program.

Luxembourg has not resettled a single person despite pledging 200 places. The country’s Foreign Ministry said it was planning to accept 50 people from Niger this month. 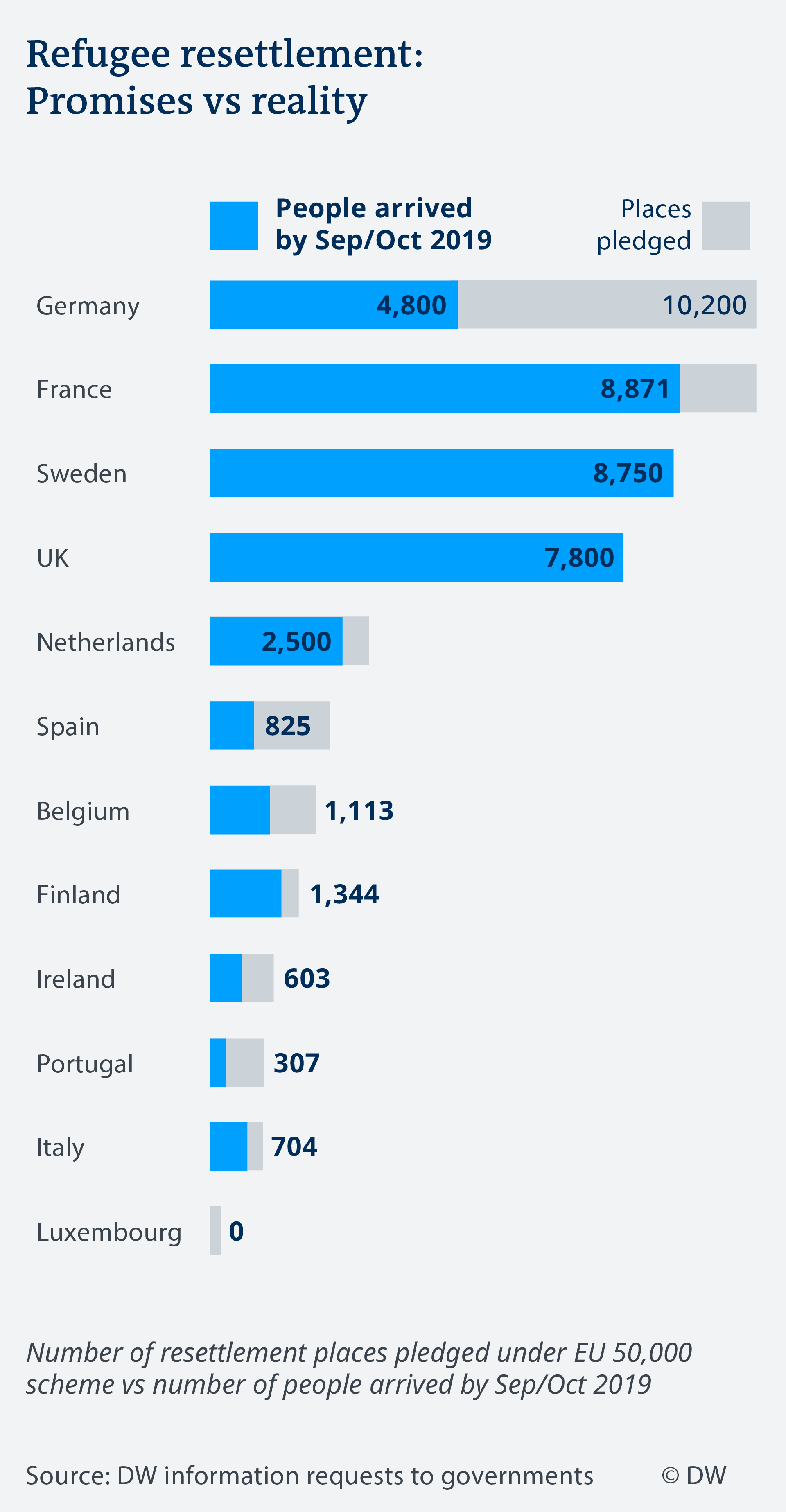 DW requested figures from the governments of 20 countries that had pledged resettlement places, and received answers from 17. Lithuania, Cyprus and Malta, which pledged 163 places between them, did not respond.

The resettlement program is supposed to offer a safe route for some of the most vulnerable people fleeing conflict zones such as Syria and Libya. It is intended as an additional option to the right of asylum.

Resettlement means refugees registered with the UNHCR in a country that is not able to accommodate them, such as Niger, can be offered a safe and legal route to another country that has agreed to host them.

The numbers of refugees who arrive in Europe under resettlement programs are relatively small compared to the numbers making irregular journeys and applying for asylum after they arrive. They also dwindle in comparison to the 3.6 million Syrian refugees in Turkey.

Aid agencies nonetheless say the resettlement system is an important tool for protecting those in greatest need.

Under the EU program, host countries receive a payment of €10,000 ($11,000) for each person they resettle, to assist with integration efforts.

The United States and Canada also offer resettlement, though President Donald Trump has dramatically cut the numbers of places offered by the United States.

Charlie Yaxley, a spokesperson for UNHCR, said: "Resettlement is not happening fast enough. We need resettlement for the most urgent cases, such as children, survivors of rape and torture, elderly and disabled people."

Europe's failure in the refugee crisis

EU Commissioner Avramopoulos' term in office ends on October 31, so the task of coordinating any future EU resettlement program will fall to his successor Margaritis Schinas, who has been at the center of controversy even before starting his job.

Schinas has been appointed under the new title of commissioner "for Protecting our European Way of Life" — a name which critics said mimicked the rhetoric of far-right populists, who claim immigration threatens European values.

Many political parties across Europe have made immigration an election campaign issue, taking a lead from populist parties and the far-right.

Media coverage has also contributed to a picture of immigrants as the cause of violent crime and strain on public services.

"Resettlement is something that is not completely off the political agenda, but discourse around refugees has shifted in a negative direction in recent years," she said.

Despite that backdrop, data suggests the majority of EU citizens continue to support taking in refugees.

A survey conducted by the Pew Research Center in 10 EU countries in spring 2018 found that 77% said they support taking in refugees from countries where people are fleeing violence and war.

The aid organization International Rescue Committee (IRC) has called for the EU to meet its resettlement promises and pledge a further 250,000 places within the next five years. IRC argues that wealthy European states are well capable of accommodating these numbers, which would still only represent 17% of the people in need of resettlement worldwide.

Lena Donner, an IRC policy adviser, said: "Each delay means additional time for vulnerable people spent in limbo and additional time lost for the EU to demonstrate that it is serious about supporting its partners and sharing the global responsibility for protecting refugees."

Merkel: "The cohesion of this European Union is at stake"