Germany is seen as a progressive and safe country for LGBTQ+ people, but a new social media trend is exposing the daily struggle of many. One user recalls being threatened with the specter of Nazi death camps. 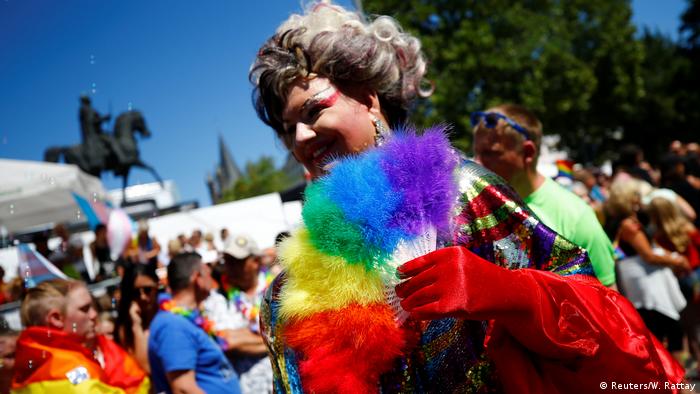 LGBTQ+ people in Germany are sweeping Twitter with the hashtag #MeQueer, exposing how difficult life can still be in the country.

Lesbian, gay, bisexual, trans, intersex, pansexual and queer people are using the hashtag, modeled on the #MeToo movement, to expose the reality of their situations.

Read more: Hate crimes against homosexuals on the rise in Germany

'We used to gas you'

In one tweet, a 19-year-old describes walking through the streets of Berlin wearing a rainbow T-shirt when an elderly man shouts out, "When I was young, we fortunately could have gassed you!"

Threats of violence and open insults still persist for many people.

"The worst thing is when I just walk around holding hands with my boyfriend, then get spat on and have insults hurled out of cars at me. I'm not doing anything bad, nothing sexual, I just love my sweetheart," one Twitter user wrote.

"Guy hitting on me and my girlfriend in the bar. We turn him down, go sit somewhere else. When we leave, he attacks us in the street," another user wrote.

"Every time before I take my husband's hand, I check the area to make sure I'm safe. Sometimes I don't realize it until after the fact," author Hartmut Schrewe wrote.

According to Buzzfeed Germany, Schrewe actually started the hashtag. He is 51 and has been married to his husband since last year.

"I was very grateful for #MeToo and #MeTwo because I could learn from it, and see the world from the perspective of people who have experienced discrimination," he told the online news outlet. "And I sometimes felt caught out. This is my main concern: That people realize 'I'm hurting someone right now.'"

He said he did not expect so many reactions: "I am grateful and enthusiastic about the courage of the people, the vehemence and the openness. It's important that no one hides."

Equally sinister to the threats of violence are the daily comments and subtle insults people endure.

"Years ago, some jerk asked us, 'Which one of you two is the man?' I said: 'On even days me, on odd days her,'" a programmer recalled.

"You're with a woman? Uh-huh, so you've never really had sex," a linguistic scientist user recalled in one conversation with a gynecologist.

Coming out for young people

A common theme of posts was coming out as a child and the reactions of family and friends.

"After my outing, a homophobic — former friend — set me a deadline by which I could 'change my mind' to be allowed to continue being his friend," a student wrote.

Others talked about how little homosexuality and gender dysphoria was openly discussed in high school.

"We didn't have any outed queer students at school. 2 weeks after graduation: 6 pupils from my class came out," a Twitter user wrote.

"My mother told me not to come out to my grandparents; they would shut me out of the family (with disinheritance and everything)," a co-founder of a political magazine recalled.

The hashtag has spread to other countries, including Austria and France, but remains a German-language dominated social media trend.

A study last year found that hate crimes against gay people in Germany was on the rise.  Over the first half of 2016, there were 130 hate crimes reported connected with the victim's sexual orientation. Over the same period in 2016, 102 crimes of the same nature were reported.

Two married men have become the first gay couple to adopt a child in Germany. Gay marriage became legal in Germany on October 1. (10.10.2017)