German Chancellor Angela Merkel has pledged greater NATO solidarity with its Baltic members on a flying visit to Latvia. However, she again rejected the prospect of permanently establishing NATO bases in the region. 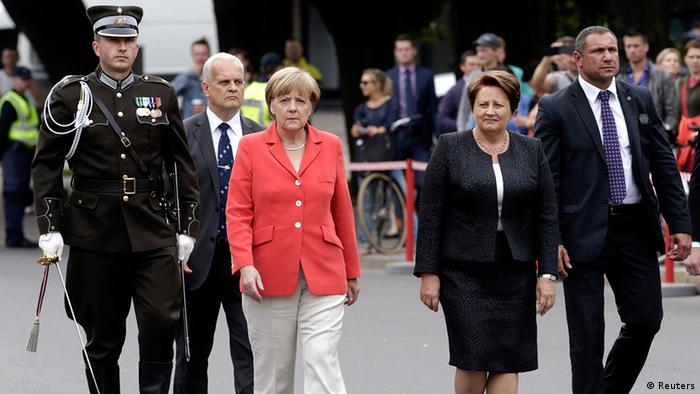 Speaking about possible strategy changes for September's NATO summit in the UK, Merkel said the transatlantic alliance would have "a very much stronger presence" in its eastern territories than previously. The German chancellor cited military maneuvers in the region as a possible extra step, but rejected the possibility of stationing troops in Latvia, Lithuania and Estonia on a long-term basis. 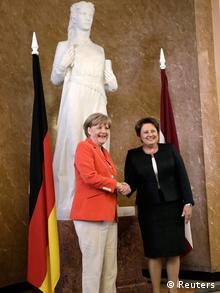 Merkel pledged more help, if not what Straujuma had called for

Her Latvian counterpart, Laimdota Straujuma, had raised this issue before Merkel's arrival, and on Monday said that the two governments were not very far apart on NATO matters. Straujuma said the most important thing was to send a signal to Russia, because "the trust is lost."

'Preparations must be stronger'

Merkel acknowledged that the unrest in Ukraine, from the annexation of Crimea by Russia to the conflict with separatists in the east, had altered the security situation in the region.

"I absolutely understand the concerns of the populations in Latvia, but also in the other Baltic states, and Poland, too," Merkel said, adding that the alliance had to "prepare itself" in case the need arose to act on the defensive pact. "These preparations must be stronger than we thought necessary a few years ago."

Merkel also visited the city's Freedom Monument, honoring soldiers killed in the Latvian War of Independence with Russia, laying a commemorative wreath at the site. Her spokesman Steffen Seibert posted an image on his Twitter account.

Existing NATO expansions in eastern Europe - such as the development of a missile shield in Poland and Romania - have already irked the Kremlin.

As well as NATO membership, Latvia has been a part of the EU's open-border Schengen Zone since 2007, and adopted the euro as its currency at the start of 2014. One-third of the country's roughly 2 million inhabitants reside in Riga. NATO's summit takes place on September 4-5 in Celtic House, not far from Cardiff in Wales.