She's been called the German answer to J.K. Rowling, author of the Harry Potter books, but Cornelia Funke keeps a low profile and isn't even that well known in her native country. That could soon change. 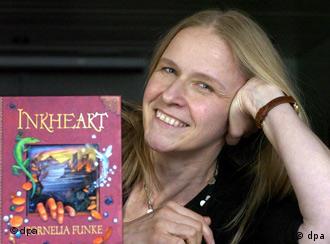 Cornelia Funke with "Inkheart," one of her most successful books

On Time magazine's list of the top 100 people who have influenced the world in the past year, three Germans are present. They aren't perhaps who you'd think. Chancellor Gerhard Schröder doesn't get a mention, nor does foreign minister Joschka Fischer or any of the country's CEOs or top scientists.

Instead, Formula One driver Michael Schumacher made the grade, as did Cardinal Ratzinger, the man some believe could become the next pope. The third German was Cornelia Funke, the best-selling author of children's books whose fantasy-filled stories are enchanting readers around the world.

With a sigh he sat down behind his desk. Then, behind the door, someone whispered. They're probably admiring my sign, thought Victor. It was black and shiny and had gold lettering: "Victor Getz, Detective. Investigations of Any Kind." The door knocker next to the sign was in the shape of a lion's head with a brass ring in its mouth, which Victor has just polished this morning.

Victor Getz doesn't know it yet, but on this very morning he will set out in search of two street children, Prosper and Bo, and perhaps while he's at it, he will find himself. Victor is one of the central characters in Cornelia Funke's book "The Thief Lord."

Her characters are often not the nicest folks. They're often grumpy, shifty, timid, complicated and cunning -- always three dimensional and without exception, loveable. In Funke's fantastical stories, the figures move through refreshingly unpredictable plots, which are always immensely entertaining for readers. 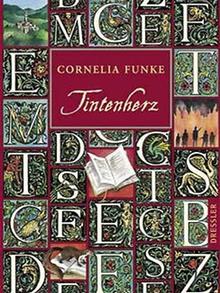 "I like to show children things that I myself find incredibly wonderful, for example, Venice," she said. "Of course other things creep in that occupy one's mind, like the unbelievable lack of compassion that exists so often between humans and animals, or humans and humans. But I always try to bind it all in the story. The story comes first."

The former book illustrator began writing her own books 15 years ago; most have been bestsellers. But her phenomenal success has been so quiet that most Germans haven't yet noticed this new global writer in their midst. It's mostly parents for whom the name "Cornelia Funke" has taken on special meaning, since it so often pops up in the juvenile section of libraries or on the wish lists of their children.

US-based Time magazine has been more alert to her talent than her compatriots since it awarded her a place in the magazine's top 100 list.

"She has become truly international and everyone who discovers her books really loves them," said Adi Ignacius, Time's executive editor. "They just find them to be very, you know, magical and enchanting and also sophisticated." 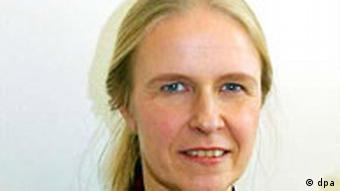 The 46-year-old has sold more than three million books in her career, winning several prestigious awards in the process. Her most well-known works, "The Thief Lord, "Dragonrider" and "Inkheart" have been translated into 20 languages. "The Thief Lord" has been made into a film and will hit German cinemas this fall. Big-screen productions of "Inkheart" and the girl's series "Wilde Hühner" (Wild Chickens) are also being planned.

"It's true that right now I'm reaching millions of children. But I'm not very optimistic what kind of influence I have," Funke said. "But if it means that children in for example America are told stories by a European, then that's something at least."

In the UK especially, Funke is often described as the German response to J.K. Rowling, the British superstar author of the Harry Potter series. Rowling, who is nine years younger than Funke, is now working on her sixth Harry Potter book. Funke, on the other hand, has written more than 40 books in 15 years. One of her most successful, "Inkheart," is an homage to reading and the power of the written word.

On that night -- when so much began and so much changed forever -- one of Meggie's favorite books lay under her pillow and since the rain wasn't letting her sleep, she sat up, rubbed her eyes and pulled the book out. The page rustled promisingly as she opened it. Meggie thought that this first sound of pages was different in every book, depending on if she already knew what it was going to tell her or not.

Seemingly unmoved by her many literary awards and the Time magazine list, Cornelia Funke simply goes on doing what she does best -- write. Right now she's working on a sequel to "Inkheart" called "Inkblood." Like her colleague J.K. Rowling on the other side of the Channel, she will continue with each new book to turn both children and adults alike back to the pleasures of reading. And that, really, is her goal.

Looking for a Reason to Read?

Reading is on its way out. Sounds sad? It is, but if psychologists are to be believed, it's just a temporary phenomenon. Reading simply has too many advantages, they say. If only you can find the time for it. (July 15, 2004)