German Foreign Minister Frank-Walter Steinmeier and his Kosovar counterpart Hashim Thaci have planned to fight mass migration from Kosovo to Germany together. Kosovars have virtually no chance of asylum in Germany. 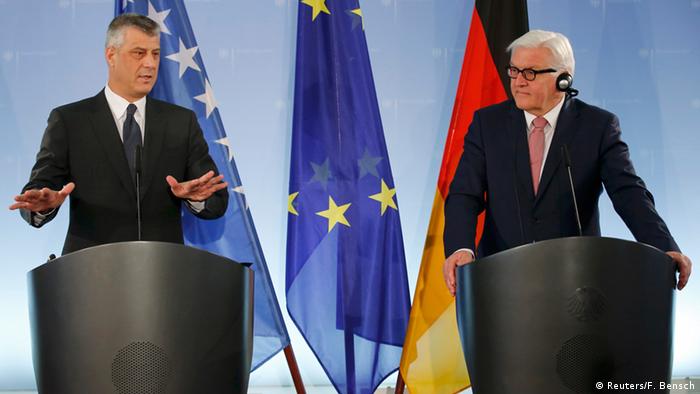 "It is very distressing that people leave," Kosovo's Foreign Minister Hashim Thaci (above left) said in Berlin on Monday during a meeting with German top diplomat Frank-Walter Steinmeier. "We are making efforts to create jobs, so that people have a future in Kosovo," Thaci added.

At the same time, he called for an easing of visa restrictions for citizens of Kosovo.

In the small Balkan state that declared its independence from Serbia in 2008, about 40 percent of the population live in dire poverty. Some 20,000 people left Kosovo so far this year, most of them heading for Germany in search of a better future. But poverty does not qualify a person for asylum in Germany, so more than 99 percent of asylum claims filed by Kosovars were denied. This leads to a huge number of deportations.

Only people who are politically persecuted have a chance to be granted asylum in Germany, Steinmeier stressed during his meeting with Thaci in Berlin.

Germany introduced fast-track procedures to deal with asylum claims filed by refugees from Kosovo. Each of these asylum claims has to be processed within two weeks - down from an average of several months.

There’s no end in sight to the flood of refugees from Kosovo into the EU. It’s a touchy issue in transit country, Serbia. Politicians are using the situation to score points, and conspiracy theories are rife. (23.02.2015)