Police in Kosovo have arrested three men over the murder of the Serb politician Oliver Ivanovic. As a moderate, Ivanovic had been considered capable of building bridges between ethnic Albanians and Serbs. 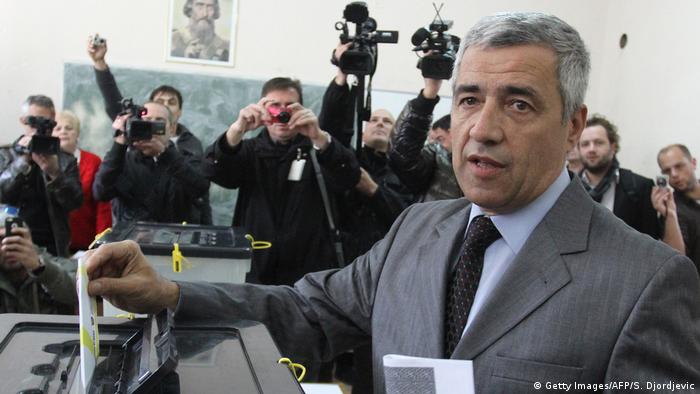 Oliver Ivanovic was shot dead outside his office, but the motive is unclear

The men, all ethnic Serbs, were said to have been living in the northern part of the town of Mitrovica, where Ivanovic was assassinated in front of his office in January.

Police said they had seized evidence for the case during raids on four locations. According to a prosecutor's statement, illegal weapons were among the materials found.

The early morning raids represented a rare intervention by police in the northern half of Kosovo's ethnically divided city of Mitrovica. Serbs live mainly in the north, while the south is mainly ethnic Albanian.

News of the arrests triggered protests by ethnic Serbs on the town's main square.

Read more: Who was Oliver Ivanovic, the murdered Serb politician in Kosovo?

"I assure all citizens of the Kosovo state and the public order institutions that it (the police operation) will be never be oriented against any ethnic or political grouping," Haradinaj wrote on his Facebook page.

Kosovo's ethnic Serb leaders also called for calm, while urging both Serbia and the international community to help.

Igor Simic, an ethnic Serb in the Kosovar parliament, criticized police for using "excessive force" during the arrests.

Goran Rakic, mayor of Northern Mitrovica, said he had talked by phone to Serbian President Aleksandar Vucic about the arrests.

Vucic was said to have called a meeting with army and police commanders, as well as security service members.

The 64-year-old Ivanovic was considered a rare political figure who might have been able to bridge the country's deep ethnic divide. The motive for his death has been a source of much speculation.

Tensions between Kosovo and Serbia have soared this week after Kosovo failed in its bid to join the international police organization Interpol. Kosovo, which accused Serbia of sabotaging its efforts, retaliated by imposing a 100 percent tax on goods from Serbia.

Ethnic Albanians in Kosovo fought a war with Serbia from 1998 to 1999, which ended with a NATO bombing campaign that forced Serb troops to withdraw from Kosovo.