Ramush Haradinaj: Europe is Kosovo′s destiny | Europe | News and current affairs from around the continent | DW | 01.02.2018

On Conflict Zone, Prime Minister Ramush Haradinaj tells DW's Tim Sebastian Kosovo's future is European. But as Western allies worry over the fate of a new war crimes court and the rule of law, the stakes are high.

In January, a prominent Kosovo Serb politician, Oliver Ivanovic, was gunned down outside his office. A decade on from gaining independence from Serbia and nearly two decades from a war which claimed the lives of up to 12,000 people, politics in the fledgling state of Kosovo remain volatile.

Following months of wrangling after snap elections in June 2017, the country's recently appointed prime minister, Ramush Haradinaj, has returned to the job he gave up in 2005 to go to the Hague to face charges of war crimes, allegedly committed during his time as a commander in the Kosovo Liberation Army (KLA). He has since been acquitted twice.

Since 2008, more than 110 countries have recognized Kosovo's independence, though five members of the European Union (Cyprus, Greece, Romania, Spain and Slovakia), which it eventually hopes to join, have not. 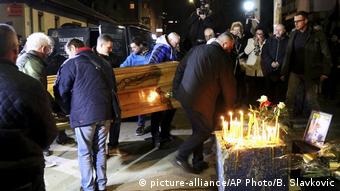 Kosovo Serb politician Oliver Ivanovic was gunned down in the northern Kosovo city of Mitrovica, which is divided between ethnic Serbs and Albanians

In January, the US and leading EU nations issued a stark warning that Kosovo would face "severe negative consequences" if a newly constituted war crimes tribunal was scrapped by lawmakers, including ending integration into the EU and NATO.

A petition supported by 43 members of parliament in December - which includes MPs from the prime minister's and president's parties - pushed for an extraordinary session in which cooperation with the tribunal could be revoked.

Haradinaj himself reportedly told the press in January that he opposed the Kosovo Relocated Specialist Judicial Institution (KRSJI) or 'special court', as does the country's president, Hashim Thaci.

So will the court go ahead?

"The court exists. [It] is created in constitutional amendments and it is not in question," Haradinaj told Conflict Zone. But given the threat by the US and other leading nations, did the prime minister recognize how high the stakes were over any threat to the court?

"We are aware of that. […] Kosovo satisfied in the past its obligations towards international law and national law. So there is no doubt that Kosovo will continue and will stay committed to [that]," said Haradinaj.

Reiterating that the petition was an "initiative of MPs" not a decision on the court, DW's Tim Sebastian pressed the prime minister on whether the venture by the 43 MPs seemed to be going anywhere.

"It does not," he told Tim Sebastian.

In an interview in November, the court's president, Ekaterina Trendafilova, said the special court was ready to begin with indictments and that no one would have immunity. 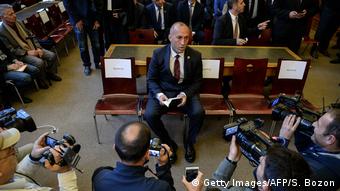 Haradinaj was arrested in Colmar, France, in 2017 following the issue of an international arrest warrant by Serbia. He was freed after a judge denied Serbia's extradition request

Haradinaj told Conflict Zone he held "no personal fear" over the court and would appear if summoned.

But the prime minister's brother, Daut Haradinaj, an MP and former KLA member, has warned there would be "no KLA fighter that will not join in to prevent political action by anyone who intends to profit politically from the arrests of a  special court."

The court will be based in the Hague to avoid witness intimidation.

A 2017 report on Kosovo's justice system showed it was the least trusted of all the country's institutions by the public.

Another concern for the EU is Kosovo's failure to ratify in parliament a border deal signed with Montenegro. Why isn't it doing so?

"Montenegro is a neighbor but as well a friend. We have very close ties with Montenegro. […] But the agreement on the border was not transparent to our parliament. [It was] signed by our representatives but parliament was not aware, not informed in advance."

Signed in 2015, the deal on demarcation between the two countries was a precondition for visa-free travel in the EU for Kosovo citizens, but those opposed say the agreement will force thousands of hectares of its territory to be given up to Montenegro.

The Kosovo government's own minister for European integration, Dhurata Hoxha, has even criticized the failure to ratify, saying it "shows that Kosovo is not ready to respect international obligations."

"I respect her view," said Haradinaj. "Our parliament has a different view and this is the reality. And we still live in a democracy."

But with the demarcation deal under threat, why should the EU help Kosovo – including gaining recognition as an independent state from the five outstanding EU members – if it cannot commit to its agreements?

"But what comes first? We are waiting for the five non-recognizers for some years. Our challenges are only becoming bigger and bigger because of that situation. The EU cannot deal with us as a partner. When I am in Brussels, the Kosovo flag is not there. Being in such a reality only multiplies difficulties to be resolved," the ex-army commander told Tim Sebastian.

The EU in Kosovo