Kim Dotcom enters final fight to avoid extradition to US

New Zealand's top court has begun hearing Megaupload founder Kim Dotcom's appeal against extradition to the US. Dotcom faces charges of copyright infringement and racketeering if his extradition goes through. 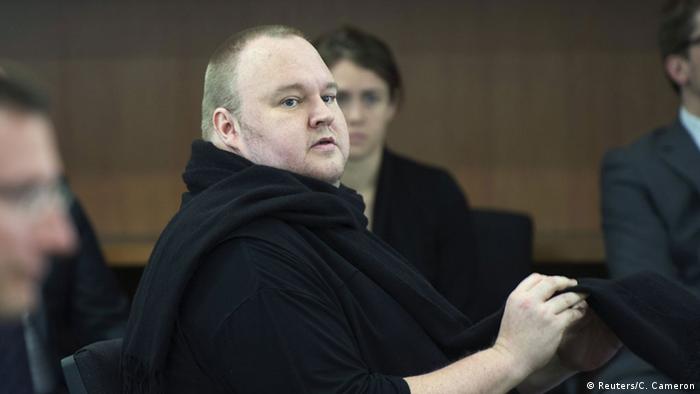 A five-day appeal hearing on the extradition of Kim Dotcom got underway Monday in New Zealand's Supreme Court .

It represents Dotcom's final attempt to avoid extradition to the United States, where he faces criminal charges including conspiracy to commit racketeering, copyright infringement, money laundering and wire fraud.

A district court in New Zealand ruled in 2015 that Dotcom, the founder of the file-sharing service Megaupload, and his associates Mathias Ortmann, Finn Batato and Bram van der Kolk were eligible for extradition to the US. The decision was upheld by the country's High Court in 2017 and again in the Court of Appeal in 2018.

If the Supreme Court deems Dotcom and his associates eligible for extradition, a final decision on the case would lie with New Zealand's Justice Minister.

Dotcom, born Kim Schmitz in the northern German city of Kiel, founded Megaupload in 2005. The website provided online file storage and viewing services and made millions from advertising and premium subscriptions.

At its peak, Megaupload was the 13th most popular website on the internet and accounted for 4% of all online traffic.

But the US' Federal Bureau of Investigation (FBI) seized the domain in 2012 and indicted Megaupload's owners for allegedly operating as an organization dedicated to copyright infringement. Dotcom has resided in New Zealand since 2010. He was arrested in 2012, and has denied any wrongdoing.

Ahead of the trial, Dotcom posted on Twitter that his file upload service "allowed users to email a link to a file. That's it."

Dotcom and his associates could face decades in jail if extradited to the US and found guilty.

EU member states have given final approval for copyright reforms ensuring artists and news publishers get their due in the internet era. The proposed reforms have triggered Europe-wide protests over internet freedom. (15.04.2019)

Visitors to Germany are often struck by the lack of free Wi-Fi — now the country has cleared one of the last hurdles. The supreme court has upheld a rule shielding companies offering hot spots from copyright prosecution. (26.07.2018)