New Zealand court rules Kim Dotcom can be extradited to US

German-born internet entrepreneur Kim Dotcom and three of his colleagues can be extradited to the US to face criminal charges, a New Zealand judge ruled. The long-running legal battle is expected to continue for years. 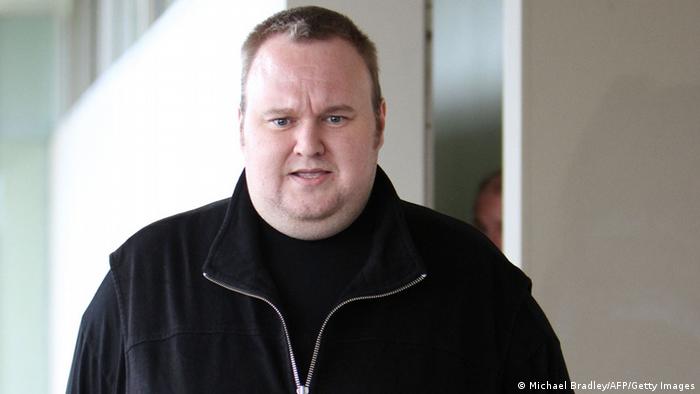 In a decision issued on Monday, the New Zealand High Court upheld a 2015 district court ruling against Kim Dotcom, maintaining that he was eligible for extradition.

Kim Dotcom's extradition appeal to US to be streamed on YouTube

Kim Dotcom's appeal against extradition to the US will be streamed on YouTube from the Auckland High Court, a judge has ruled. The Internet entrepreneur is wanted in the US to face charges of copyright infringement. (30.08.2016)

German-born Internet-mogul gets boost in battle against US extradition

Kim Dotcom, a file-sharing website founder, has scored a legal victory in a New Zealand court against US extradition attempts. American authorities want to try Dotcom in a US court for alleged copyright theft. (31.05.2013)

The legal saga of one of the world's most recognizable internet entrepreneurs enters a new phase on Monday when Kim Dotcom is set to appear before a New Zealand court to appeal his extradition to the United States. (26.08.2016)

The United States has been seeking to have Dotcom and three of his former colleagues - Mathias Ortmann, Bram van der Kolk and Finn Batato - sent for trial on 13 counts including conspiracy to commit racketeering, copyright infringement, money laundering and wire fraud since 2012.

The charges relate to the operations of Megaupload, a file sharing website founded by Dotcom. US prosecutors allege Megaupload netted some $175 million in criminal proceeds and cost copyright owners about $500 million by facilitating internet piracy.

Dotcom argues he can't be held responsible for the actions of Megaupload's millions of users. He and his co-accused could face decades in jail if found guilty in the US.

"Look, we're disappointed it's not all over in the [New Zealand] high court," Dotcom's lawyer Ron Mansfield said. "But we're one step away, as far as we're concerned, from winning outright," he added, indicating the case would be taken to the Supreme Court if necessary.

The High Court agreed with part of Dotcom's appeal - that copyright infringement was not an offense which warranted extradition. However the judge ruled there was enough evidence to put Dotcom on trial for criminal fraud, meaning he could be sent to the US.

"We won but we lost anyway," was how Dotcom summed it up to his followers on Twitter, of which he is a frequent user.

Dotcom was arrested five years ago following a dramatic raid on his mansion near Auckland which was requested by US authorities. The German citizen, born Kim Schmitz, had gained residency in New Zealand under an investment scheme which benefits the wealthy.

During his time on bail he released a music album, created another file sharing company and launched a political party which failed to win a place in parliament during New Zealand's 2014 general election.