British MPs issued narrow support for debating Boris Johnson's Brexit deal, but rejected his plan to complete the process in just three days. EU officials are backing a delay, but what comes next is not wholly clear. 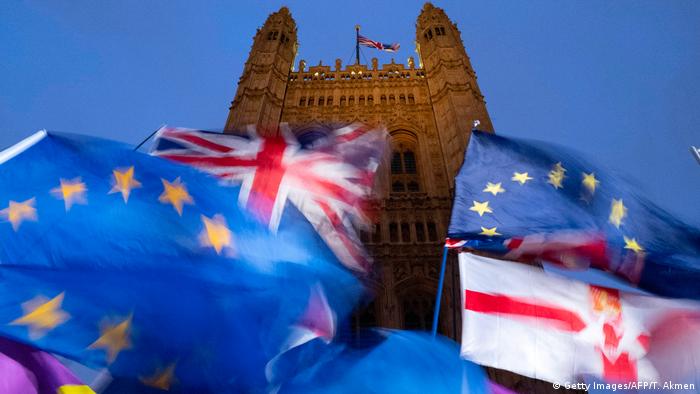 Boris Johnson won one key victory and suffered a key defeat on Tuesday in the lower house of the UK Parliament.

First, Members of Parliament (MPs) approved a motion calling for the legislative body to start formally debating the prime minister's Brexit deal with the European Union. The motion passed by 329 votes to 299.

However, the evening's most hotly anticipated vote — on whether the House approved of the government's plan to conclude the process by Thursday evening — ended in a 308-322 defeat for the government. 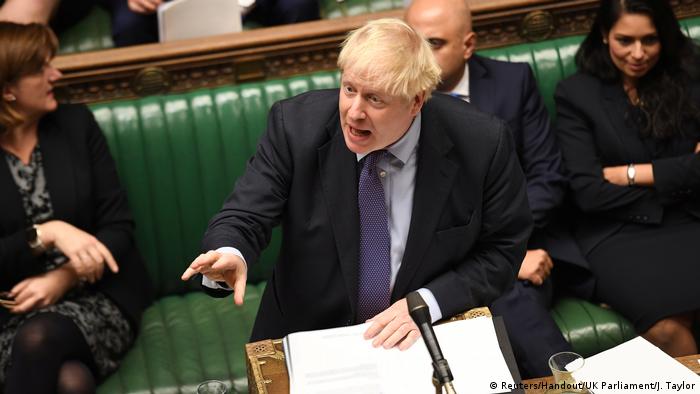 The bill itself, stretching past 100 pages, was only published on Monday evening. Skeptics argued that the proposed time frame to scrutinize and debate it was insufficient. However, should the process take longer than planned, Johnson's "do or die" October 31 deadline for leaving the EU almost certainly cannot stand.

Read more:  Brexit deal: What could it mean for the Northern Irish and British economies?

How has the EU responded?

Shortly after the vote, European Council President Donald Tusk said that he would recommend that the EU grant the UK's request for a Brexit delay.

In a tweet, Tusk said the move was "in order to avoid a no-deal Brexit" and that he will "propose a written procedure" to accept the extension.

The European Commission, the executive arm of the EU, said it took note of Tuesday's vote. Spokeswoman Mina Andreeva wrote on Twitter that Tusk was consulting EU leaders on the UK's request to push back the divorce date to January 31, 2020.

Getting the other 27 member states to agree, however, could prove difficult — as well as agreeing the length of such a delay.

France said that it was open to a short-term "technical" extension, but ruled out renegotiating the deal.

"At the end of the week, we will see if a purely technical extension of several days is justified in order for the British parliament to finish its parliamentary procedure," European Affairs Minister Amelie de Montchalin told the French Senate on Tuesday evening.

Earlier, French Foreign Minister Jean-Yves Le Drian said he sees "no justification" for a further delay, but added that Paris hopes to avoid the economic fallout of a no-deal scenario.

The British government's next steps now that its timetable failed are unclear. Johnson said when challenged during the parliamentary debate that he would pull the bill altogether and seek a new election. However, he struck a more conciliatory tone after winning one vote and losing the other, focusing in particular on the positive result.

"Let me say how welcome it is, even joyful, that for the first time in this long saga, the House actually accepted its responsibilities and has come together and accepted a deal," Johnson said. "But I must express my disappointment that the House has again voted for delay, rather than a timetable that would have guaranteed that the UK would be in a position to leave the EU on October 31 with a deal. And we now face further uncertainty and the EU must make up their minds over how to answer Parliament's request for a delay."

Johnson said that one response from the government would be to accelerate preparations for a "no-deal" Brexit on October 31. Yet he also alluded to another potential way to proceed:

"But secondly, I will speak to EU member states about their intentions until they have reached a decision. And until they reach a decision, we will pause this legislation," Johnson said. Pausing the legislation leaves the option open for MPs to agree on a new timetable and restart the process to debate and perhaps pass the deal.

Opposition Labour leader Jeremy Corbyn said that the House of Commons "has refused to be bounced into debating a hugely significant piece of legislation in just two days, with barely any notice and [no] analysis of the economic impact of this bill." He called Johnson "the author of his own misfortune," but also issued an offer to the prime minister:

"Work with us — all of us — to agree a reasonable timetable and I suspect this House will vote to debate, scrutinize and, I hope, amend the detail of this bill. That would be the sensible way forward, and that's the offer that I make tonight," Corbyn said.

Amending the bill greatly is not really in Parliament's power, though. Any changes not relating purely to the UK would need to be tolerable on the EU side as well.

Johnson has already reluctantly sent a letter to the EU requesting that the October 31 deadline be extended. Earlier on Tuesday, EU officials had made it clear they were waiting on word from Westminster, with the final decision resting with the EU's other 27 heads of state and government. Tuesday's vote may be deemed to have put the ball back in their court.

The opposition Labour party's Whip's Office took the unusual step during the debate of publicly proposing a collaborative solution to its Conservative counterpart.

It proposed a longer period of debate on the deal — keeping its chances of passing alive — with a view to concluding the debate and potentially amending the deal. Then, with Brexit complete, an election could follow. However, given Labour's official party line was to refuse even to open parliamentary proceedings on the matter, it's not entirely clear how a short extension for debate would guarantee the bill's passage.

Brexit, the Brits and another 'no' in the House of Commons

Finally, a Brexit deal? Well, apparently not quite. The UK's lower house of parliament, the House of Commons, loves to vote "no" and to push for delays. This is tough for politicians but great fun for cartoonists. (19.10.2019)

Boris Johnson has doubled down on elections, saying he would "rather be dead" than ask for a Brexit delay. "Torn between family and the national interest," the prime minister's younger brother resigned from government. (05.09.2019)

The currency took a beating from investors after the government announced plans to cut billions in tax revenues. The new Conservative Party government under Prime Minister Liz Truss has been in power for just 20 days.